“I think there’s a socialistic impulse” 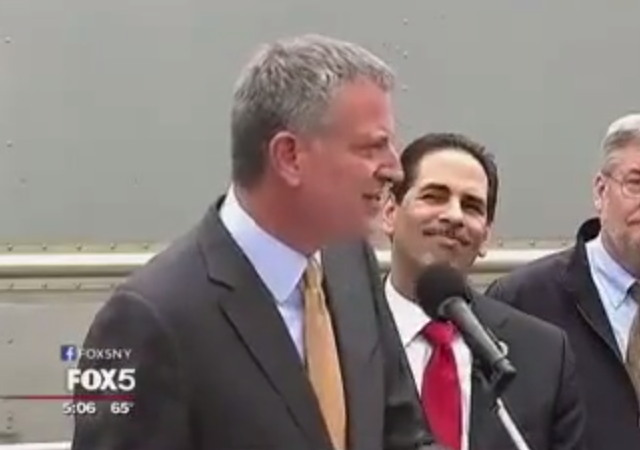 New York City Mayor Bill de Blasio is a leftist. His words and actions have proved this repeatedly. Yet during an interview with New York Magazine published this week, he said some things that would make Bernie Sanders wince.

In 2013, you ran on reducing income inequality. Where has it been hardest to make progress? Wages, housing, schools?

What’s been hardest is the way our legal system is structured to favor private property. I think people all over this city, of every background, would like to have the city government be able to determine which building goes where, how high it will be, who gets to live in it, what the rent will be.

I think there’s a socialistic impulse, which I hear every day, in every kind of community, that they would like things to be planned in accordance to their needs. And I would, too. Unfortunately, what stands in the way of that is hundreds of years of history that have elevated property rights and wealth to the point that that’s the reality that calls the tune on a lot of development.

He then goes on to describe the utopia New York City would be if he had the power he really wants:

Look, if I had my druthers, the city government would determine every single plot of land, how development would proceed. And there would be very stringent requirements around income levels and rents. That’s a world I’d love to see, and I think what we have, in this city at least, are people who would love to have the New Deal back, on one level. They’d love to have a very, very powerful government, including a federal government, involved in directly addressing their day-to-day reality.

While commenting on this, Alexandra DeSanctis of National Review put it in historical perspective:

Earlier in life, De Blasio was a left-wing activist and an ardent supporter of the radical socialist government in Nicaragua — the Sandinista National Liberation Front — which at the time was strongly opposed by President Ronald Reagan and his administration.

Another aspect of the interview jumped off the page for Michael Gartland and Danika Fears of the New York Post. Mayor de Blasio is very fond of the job he’s doing:

Mayor Bill de Blasio claims he’s running the city so well, “you’d assume they’d be having parades out in the streets” — and insisted he’d be more popular if it weren’t for “the time in history.”

“When I think about how crime’s gone down for four years, graduation rates up, test scores are up, more jobs than ever in our history — I think, ‘Wow, just that quick profile, any candidate anywhere would want it,’ ” he boasted to New York magazine.

“You’d assume they’d be having parades out in the streets. But that’s not the time in history we’re living in,” he added.

Will the Mayor surrender all of his private property in the near future? Certainly, he’ll lead by example.

The man is a communist and proudly so it seems. He is also a Democrat naturally.

He is also a man who is reported to be seriously considering a candidacy for the Democrat nomination in 2020. There is a distinct probability that this quote won’t be held against him in that Party Primary campaign.

He comes by it honestly. He was a red diaper baby — both his parents were communists (whether official CPUSA members or not).

I think people all over this city, of every background, would like to have the city government be able to determine which building goes where, how high it will be, who gets to live in it, what the rent will be.

How much do I have to give de Blasio to determine that I get to live in a 40th-floor penthouse for $10 rent? Oh, HE want’s to collect the rent, instead of the property owner? Got it.

Bill de Blasio claims he’s running the city so well, “you’d assume they’d be having parades out in the streets”

de Blasio would make a great dictator. Just ask him. Of course he would have to purge the other dictators in waiting — Hillary, Obama, et al — before they purged him. Sociopaths are such wonderful people — especially as our rulers. What could go wrong?

Sad thing is that he would probably still be able to get enough people in New York City to vote for him to be mayor again.

While pitiful in a sense, I don’t feel sad about people in Kuhlifornia or Nuevo Ork getting what they vote for…

It wouldn’t be a problem if we could keep those people and their ideas in New York City/California and let them deal with it but they spread out through the country like a virus.

Who the hell would down-vote Mencken?!

It’s haters of the T-rumpian cult. I don’t genuflect to their Great Goad Cheeto, so they just down-thumb me as knee-jerks.

Hey, is that Joe Stalin’s son in the red tie standing behind de Blasio, with a “I’m a commie, and he is too” smug look on his face?

That would explain a lot.

i think that if NYC denizens want him, that’s ok.
just let him NEVER LEAVE there.
BTW why isn’t he required, as a ‘good red’, to give his money to the poor ?

Then he needs to Eminent Domain it all! Seize every square inch of land within the City Limits!

Teach those ungrateful ‘Proles that elected him that Elections Have Consequences!

He’d have to pay for it all, at market price.

Not really, he’d be the emperor, he could change laws willy nilly.

He couldn’t change the fifth amendment, which requires just compensation.

No, it’s what the courts say is just compensation, which is market value, as near as it can be determined.

What does it say when this communist bastard is among the most honest American politicians as regards his true political beliefs and desires?

Which communist bastard, this guy or obama?

Of course, both of them would seek to be in the corrupt elite, living large like the former Soviet elite overlords of the rest of Russia.

Remind me how many (ugly) unoccupied government buildings are out there? Those were built to meet a need and designed by experts weren’t they?

The Democrat party is full of Socialists, and quite a few Communists.

Bernie made it ok to use those terms, and people are beginning to see them for who they are – dangerous threats to liberty.

As with so many other Dumb-o-crats who’ve gotten rich off of a lifetime sinecure in politics spent spewing demagoguery and hot air (e.g., Maxine Waters, St. Obama, Nancy Pelosi, Comrade Sanders), would de Blasio put his personal wealth and property where his big, bloviating mouth is? Will he donate his million-dollar Brooklyn townhouse to the community, so that it can be used to house the more impoverished members of the proletariat? Will St. Obama do the same with his $5 million D.C. mansion? Or, Pelosi and Waters with their respective palatial California homes? I won’t be holding my breath.