Negotiations, how do they work? 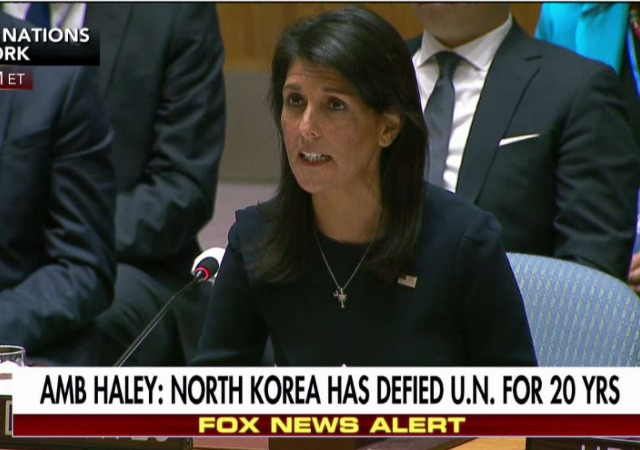 The United Nations Security Council approved new sanctions aimed at punishing North Korea for its latest missile and nuclear tests after the U.S. dropped key demands in order to win support from Russia and China.

The 15-member Security Council passed the resolution unanimously Monday following a week of talks that began when Kim Jong Un’s regime tested its most powerful nuclear bomb. The resolution seeks to cut imports of refined petroleum products to 2 million barrels a year, ban textile exports and give countries the ability to freeze assets of cargo ships whose operators don’t agree to inspections on the high seas.

“We are acting in response to a dangerous new development,” U.S. envoy Nikki Haley told the Security Council after the vote. “These are the strongest measures ever imposed on North Korea,” she said, adding that the U.S. remains willing to act alone to stop Kim’s nuclear program if necessary.

While the U.S. can claim a victory in persuading Russia and China — which hold veto power on the Security Council — to agree to the restrictions, the result is less than Haley had sought when she pushed for a ban on oil and a freeze on Kim’s assets abroad. And it’s unlikely to persuade Kim to halt his nuclear program and return to the negotiating table.

“Despite the tough talk, the U.S. is willing to water down its demands to get support of Russia and China, and that is a calculation that we are more influential when there is Security Council unity,” said George Lopez, a professor of peace studies at the University of Notre Dame and a former UN expert on sanctions against North Korea.

The administration’s requests for a full oil ban in addition to the freezing of Kim’s foreign assets did not survive negotiations, largely due to China’s fear that banning oil would result in the full collapse of North Korea. Because that part of Haley’s request was taken off the bargaining table in exchange for necessary votes from China and Russia, the New York Times is framing the sanctions as an administrative failure.

The United Nations Security Council on Monday ratcheted up sanctions yet again against North Korea, but they fell significantly short of the far-reaching penalties that the Trump administration had demanded just days ago.

Moreover, it remained wholly unclear whether the additional penalties would persuade North Korea to halt its nuclear and ballistic missile tests — the latest just a week ago, when it detonated its sixth and most powerful nuclear device. North Korea claimed that detonation was from a hydrogen bomb.

Although the resolution won unanimous backing from all 15 council members, the weakened penalties reflected the power of Russia and China, which had objected to the original language and could have used their votes to veto the measure.

The American ambassador to the United Nations, Nikki R. Haley, reacted to the bomb test last week by calling for the fullest range of international sanctions, including a cutoff of all oil supplies, in a new Security Council resolution.

Those demands were toned down in negotiations that followed with her Russian and Chinese counterparts. Late Sunday night, after a series of closed-door meetings, a revised draft emerged, setting a cap on oil exports to North Korea, but not blocking them altogether.

Assuming Haley is acting under Trump’s orders, how is this a failure for Trump?

Kim would not be persuaded to drop his nuclear program even if the UN resolution forced him to walk naked through the streets of Pyongyang while the people threw rotten eggs and tomatoes at him. How many treaties and/or agreements regarding the nuclear program has he already breached with impunity.

It is a failure but not of Trumps or haley’s . I am not against the UN voicing disappral of North Korea I am against thinking it has any meaning. does anyone think one more resolution will do anything? For that matter one more resolution ABOUT anything . After rounds and rounds of sanctions and resolutions trade between china and North Korea have increased. Thanks China. One more thing about the UN in the past 70 years there have been genocides , There have been wars of aggression both of which under the UN charter should trigger expulsion No matter how egregious the breech no one has ever been expelled. The UN doesnt even follow its own charter. Its one of the few things they have been consistent about . The leage of nations is widely considered to have been a failure but they expelled counties….it didnt bother the Soviet Union but at least the league stood up . From the UN charter Article 6
“A Member of the United Nations who has persistently violated the Principles contained in the present Charter may be expelled from the Organization by the General Assembly upon the recommendation of the Security Council.”

I guess we will have to send Dennis Rodman to negotiate with the Fat Boy.

maybe but little boy might be more effective https://en.wikipedia.org/wiki/Little_Boy

Remember on this day in 2012, we were being told our embassy had been attacked because of a YouTube video.

The media pushed that narrative w/out question for 6 months.

Remind me again why I should be believe anything the media tells us?

“The administration’s requests for a full oil ban in addition to the freezing of Kim’s foreign assets did not survive negotiations, largely due to China’s fear that banning oil would result in the full collapse of North Korea.”

And one must wonder, if a “full collapse” were immanent, would the Mad God-King engineer a Korean-flavored Gotterdammerung as his final exit? These sanctions are unlikely to do much of anything and in any case North Korea remains China’s client, but, does anyone see endgame here that does not end badly?

It would be difficult to call this a failure, since there never was any expectation that China, or Russia would stop assisting the DPRK and helping it evade sanctions (whatever they included). This is just the standard diplomatic practice of making most things of this sort meaningless in order to get the various governments to agree to them. The only practical purpose for these sanctions is to be able to say that everything short of force has been tried, and open the option of using force — this has been achieved, to the degree it can be.