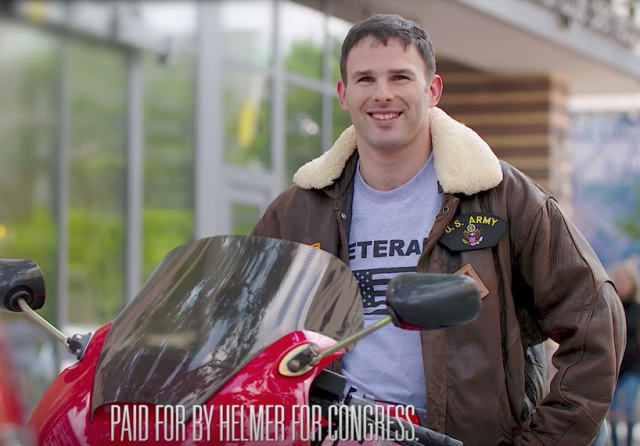 As we enter campaign season, we have an early contender for worst political ad ever. Though it’s no “I’m not a witch” (still my favorite), this one is so very terrible in other ways.

Helmer’s first ad is a pitiful over wrought reference to Top Gun. WARNING: By clicking play, the viewer acknowledges forfeiture of 1:47 of their life which they will likely regret spending; 1:47 lost forever.

Because the ad was mocked in every corner of the web, the Helmer camp released a slightly less terrible ad, attempting to make light of the first one:

One school of thought always suggests that all press is good press (with this I do not agree), but now you know who Helmer is, so I supposed there’s that? Too bad for Helmer he’s also “Helmer? Oh yeah, isn’t he the guy in the bad Top Gun homage?”

This is bothersome. I remember quite well what things were like the last time we had a Rhodes Scholar in DC!

notamemberofanyorganizedpolicital in reply to Walker Evans. | September 19, 2017 at 9:00 pm

He was about the dumbest Arkansas could produce….

Remember he never finished Oxford, because he was “expelled.”

Milhouse in reply to notamemberofanyorganizedpolicital. | September 20, 2017 at 2:50 am

That is bovine excrement. Just another stupid lie that stupid people repeat to discredit themselves. The only source for this idea is a story in the infamous Capitol Hill Blue, the same garbage site that made up the story that W Bush had described the constitution as “a goddamned piece of paper”.

Spare us the rant. If William Jefferson Clinton did indeed graduate from Oxford as a Rhodes Scholar, give some documentation. Put up or shut up, but don’t name call and rant.

Ragspierre in reply to notamemberofanyorganizedpolicital. | September 20, 2017 at 9:10 am

My understanding has always been that he dropped out. Totally in keeping with his character, btw.

Oxford is a real cut-throat place, and has been for decades. Dollar Bill might just have found it not to his liking. Didn’t make a junket into the USSR about this time? Memory fails…

agreed, that’s what I’ve always understood. Also that a significant number of American students given that honor (especially in the 60’s) looked at it as on opportunity for a 1 or 2 year vacation tour in Merrye Olde England, and never intended to do any actual schoolwork.

He also got the Rhodes Scholar gig to help him hide from the draft. Therapist was helped by many political connections to keep him from South East Asia at the time.

I’m sure the left thinks that’s just hysterically funny. Unfortunately for them, a great many of us don’t confuse being patronizing, humorless scolds with being clever.

I’m inspired. So his opponent is against Planned “baby butcher” Parenthood, and against Obamacare. Perhaps I need to send his opponent some cash. By the way, as noted on another site, his American Flag t-shirt has 11 stripes. Of what is he a veteran?

I totally missed the incorrect stripe count. Who designed that shirt??

Somebody somewhere else brought that to my attention.

I think this commercial is hilarious but at the same time, it tells the audience that under NO circumstances should this clown be elected to any office. This comes across as a fraternity stunt by kids who are in their teens.

Stopped watching when he started singing. It hurt.

All of his average Joe veteran gear looks like it just came out of the shipping pack the day of the commercial shoot. Not saying he’s not a vet, just that I doubt he normally wears his colors like he is portraying.

I particularly like when they moved the only black woman in the room right next to him and took narrow focus from the woman in front to her. This definitely sets the bar lower than ever.

Support for Obamacare is centrist? Now THAT is funny !!!!

C’mon, Kemberlee, this is MUCH better (read: worse) than the “witch” ad. The “witch” ad was cute, but this had much more effort put into it. Too bad that the subject was so bad. 8>)