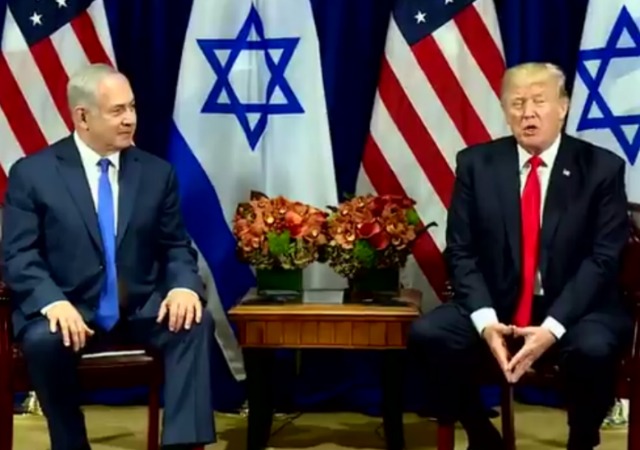 Prime Minister Benjamin Netanyahu at his meeting with @POTUS Donald Trump: "The alliance between US and Israel has never been stronger" ???????????????? pic.twitter.com/tStDKhs4pA

Trump hopes to find a way to assist in the brokering a peace deal between Israel and the Palestinians, saying it would be “a fantastic achievement”.

US President Donald Trump reiterated his commitment on Monday to reaching an Israeli-Palestinian peace deal, saying before his meeting here with Prime Minister Benjamin Netanyahu that “I think that there is a good chance that it could happen.”

Tellingly, Trump spoke only about the Palestinians during his very brief words of greeting to Netanyahu at New York’s Palace Hotel, and did not mention the Iranian situation – the issue which Netanyahu wants to focus on.

“I really believe peace between the Palestinians and Israel would be a fantastic achievement,” the American president said. “We are giving it an absolute go. I think there is a good chance it could happen; most people would say there is no chance whatsoever. I actually think that with the ability of Bibi, and frankly with the other side, I really think we have a chance.”

Asked at the end of the photo opportunity whether he wants to see a one-state or two-state solution, Trump said only, “We are talking about it a lot.”

His only reference to Iran came when a reporter shouted out a question about his administration’s policy on the 2015 nuclear deal, and he said it would become clear “very soon.”

Netanyahu opened his remarks saying that under Trump’s leadership the alliance between Israel and the US “has never been stronger, never been deeper.” This is the case “in ways people see, and in ways they don’t see,” he added.

The prime minister said he wanted to discuss with Trump “what you rightly call the ‘terrible nuclear deal with Iran,’” as well as “how to roll back Iran’s growing aggression in the region, especially in Syria.”

In a briefing with reporters afterward, Netanyahu said that the Iranian issue was dealt with in depth, and that both Jerusalem and Washington see the issue from a similar vantage point.

This, he said, was in contrast to the situation under President Barack Obama, who saw Iran as a solution to the problems in the Middle East. Trump, he said, sees Iran as the problem.

What negotiation can take place when the only thing the Arabs want is the destruction of Israel?

***Trump hopes to find a way to assist in the (sic) brokering a peace deal between Israel and the Palestinians, saying it would be “a fantastic achievement”.***

Watch your back, Bibi. He’ll do anything for a “win”.

as much as i back potus, the bug that infects ALL presidents, seems to have infected him as well. the DOS has always been anti Israel – tillerson is an oil man ’nuff said.

if the Donald can keep his own counsel, then this 2-state junk will just be a ploy.

as an aside, in 1948, HST voted FOR Israel in UN, because he had a Jewish friend who lobbyed him.

DOS – Dept Of State.
also denial of service attack.
applies to Israel in both definitions.

Bibi just remarked that Trump’s UN speech was the sharpest and bravest he seen in 30 years.

My bad I’m getting conflicting reports. The most recent quote is that this is the boldest and most courageous speech he’s seen in 30 years.