“…I think we will be back to business very quickly.” 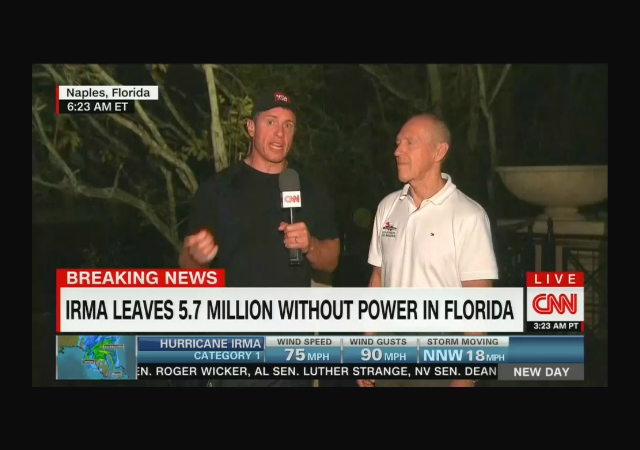 Naples was expected to be Irma’s bullseye, but first reports suggest the storm may not have caused the damage everyone expected.

On CNN this morning, Chris Cuomo interviewed Naples city manager Bill Moss. After the introduction, Cuomo said, “we didn’t expect what happened yesterday, making history in the wrong kind of way, with the gusts we got, and then that surge.”

Moss agreed that the storm initially was as fierce as expected. But he went on to say that the back side of the storm seemed to “peter out.” Although it was still dark, Moss said that so far they have seen “very little structural damage,” and that he doesn’t think the flooding of structures will be “very severe.”

Moss concluded that whereas getting power back could be a challenge, “all in all, I think we’re going to be back to business very quickly.”

CHRIS CUOMO: Right now we have the city manager of Naples, Bill Moss. We spoke to you before. You said you had a plan. But, we didn’t expect what happened yesterday. Making history in the wrong kind of way with the gusts we got. And then, that surge. We saw some of the pictures. We still don’t know what’s out there in terms of flooded homes. What are you worried about there?

BILL MOSS: Well, that storm initially was as fierce as I had ever expected. But the miracle was that the back side of the storm just seemed to peter out for us. And that was very, very helpful. We could have had much more damage as a result of that. So the negative side, we have almost all streets in the city are blocked because of tree branches and fallen trees. Some of the streets are flooded because of the tidal surge, storm surge. And it’ll take a while for those to recede.

But on the other hand, we have had very little structural damage that we’ve been able to see so far in the dark. Very little damage to businesses. I think there’ll be some flooding of structures in the low-lying areas. But I don’t think that will be very severe. So, all in all, I think we will be back to business very quickly.

Note: over on MSNBC, Willie Geist interviewed the mayor of Tampa, Bob Buckhorn. In contrast with Cuomo, who had teed up the Naples city manager to paint a grim picture, Geist asked a neutral question, wondering whether the storm was “better than you thought, worse than you thought?”

And similar to the assessment of the Naples city manager, the Tampa mayor answered, “it was far better than we thought. We thought it was going to be a punch in the face, but it turned out to be a glancing blow.”

Fair sailing ahead. Now to assess Irma’s impact and ascertain what Naples did or did not do to mitigate this historical and recurring natural event.

Our government can take a little bit of credit for this.

A great disappointment for the democrat media.

Nah, they sold a LOT of advertising over the last week.

Keep and eye on Jose now.

I would have said that a daylight evaluation of the city is necessary before making comment.

Over at The Conservative Treehouse, “Sundance” posts about the mess in central Florida. It won’t get as much press since it’s rural. Irma came in at Marco Island and then went north for a while instead of turning northwest sooner. That spared the Tampa area, and to a large extent Port Charlotte/Ft. Myers, but inland things are not so good.