He thinks what you want is big government, both local and federal 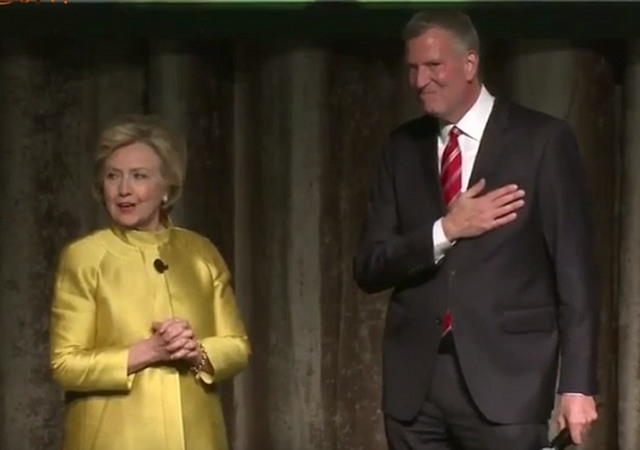 Steven Hayward of Powerline calls our attention to an interview given by New York’s Mayor Bill de Blasio. It’s quite revealing—not just about de Blasio, but about the leftist mindset concerning the role of government, our legal system, and what people themselves want [emphasis mine]:

Q: In 2013, you ran on reducing income inequality. Where has it been hardest to make progress? Wages, housing, schools?

de Blasio: What’s been hardest is the way our legal system is structured to favor private property. I think people all over this city, of every background, would like to have the city government be able to determine which building goes where, how high it will be, who gets to live in it, what the rent will be. I think there’s a socialistic impulse, which I hear every day, in every kind of community, that they would like things to be planned in accordance to their needs. And I would, too. Unfortunately, what stands in the way of that is hundreds of years of history that have elevated property rights and wealth to the point that that’s the reality that calls the tune on a lot of development…

…Look, if I had my druthers, the city government would determine every single plot of land, how development would proceed. And there would be very stringent requirements around income levels and rents. That’s a world I’d love to see, and I think what we have, in this city at least, are people who would love to have the New Deal back, on one level. They’d love to have a very, very powerful government, including a federal government, involved in directly addressing their day-to-day reality.

It’s not reachable right now. And it leaves this friction, and this anger, which is visceral.

There’s an awful lot packed in there, isn’t there?

First and foremost, we have the fact that de Blasio feels comfortable enough to express these sentiments openly rather than hide them. My guess—and it’s only a guess—is that he really believes that most New Yorkers, and maybe even most people in the US, agree with him about the function of government and how much it should dictate their lives. Sentiments and goals that just a few years ago were only whispered in private by any politician hoping to actually get elected are now declared openly by the current mayor of New York.

Next we have the scope of his vision. De Blasio would like the government to control as much as possible, and not just about real estate development. He says “[People would] love to have a very, very powerful government, including a federal government, involved in directly addressing their day-to-day reality.” And if Bill de Blasio and his cronies have anything to say about it, that’s exactly what would happen—for your own good, of course, because you know it’s really what you want. When Orwell wrote in Nineteen Eighty-Four “If you want a vision of the future, imagine a boot stamping on a human face – forever,” it was a dystopian and horrific vision. De Blasio thinks it’s what we all secretly—and maybe not-so-secretly—want. And he thinks that he’s just the guy to do the stomping, only he’ll call it a love tap.

Next we have the idea that government is capable of accomplishing this sort of regulation much better than the market ever could, and much better than free and autonomous human beings ever could. When he says that “[people] would like things to be planned in accordance to their needs,” he’s not only echoing Marx (“From each according to his ability, to each according to his needs”), but he’s also assuming that government is capable of figuring out what people’s needs really are and designing a world that meets them (although it’s possible that he doesn’t really believe that and he’s just cynically saying it in pursuit of power).

Then we have the contempt for the rule of law and for hundreds and hundreds of years of protection of property rights under it. Does de Blasio have even the remotest understanding of why our system is designed the way it is, and why property rights are so protected? I doubt it. He seems to see it as a little thing, a mere anachronism that should be pushed aside in favor of the great beneficent government he wants (“That’s a world I’d love to see..”) put in place. And he says he knows that you want it, too.

Lastly is the ominous phrase “right now,” found in the next-to-last sentence of the quote. We’re not there yet, folks, but if the de Blasios of the world have their way, we’ll be there some day soon.

Horrific vision, but to be expected from da Blah.

notamemberofanyorganizedpolicital in reply to CZ75Compact. | September 9, 2017 at 10:51 am

The problem with grandstanding, sanctimonious, self-congratulatory and holier-than-thou Dumb-o-crat career pols (who’ve never spend any substantive time working in the private sector producing goods or services of tangible value) is that the inherent hypocrisy vis-a-vis their socialist pandering and bloviating, as contrasted with the way that they jealously guard and seek to grow their personal assets, is so painfully obvious to all rational folk. It’s this

Crone Hillary, St. Obama the Infallible, Comrade Sanders, Chief Dropping Bull Warren, Maxine Waters, Nancy Pelosi and the rest of the contemptible Dumb-o-crat leadership all wax rhapsodic about “income inequality,” “spreading the wealth around” and, how, “at some point you’ve made enough money,” but, of course, their commitment to committing financial resources to advance the cause of the Proletariat Revolution somehow stops when it comes to dipping into their own substantial (and, undeserved, from a productive economic standpoint) personal real estate assets, investment accounts and defined benefit pensions. St. Obama didn’t turn over even a smidgen of his $60 million book advance to the people who have less than him, nor has he donated even a penny of his $400,000 annual pension to the same; ditto for the rest of the self-enriching and utterly worthless Dumb-o-crat clowns.

The embittered rubes who fall for the Dumb-o-crats’ playing to crass sentiments of economic jealousy and resentment of (most) Americans’ hard-earned and self-made economic success are beyond enlightenment when it comes to accepting fiscal realities regarding the American Dream. But, I will give the Dumb-o-crats credit for perpetually playing this well-worn tune come election time, because, it’s a seductive and effective one.

(Prophetic, written in 2013 when De Blasio was first elected, but still relevant today.)

So he wants the government to decide who gets to build, where they get to build, who owns it when it’s done, who gets to live there, and how much they get charged in rent. That’s no surprise; he’s a statist and collectivist (but I repeat myself).

But you’ll notice, he’s not subjecting any place he owns or lives in to such trivial regulations. His building won’t be rent-controlled and open to the poor working class.

No, sir. Laws and regulations are for the little people.

Precisely — when de Blasio offers to house the poor in his own spacious, multi-million dollar Brooklyn brownstone, then, I’ll at least give him credit for sincerity in terms of putting his personal assets where his big mouth is, notwithstanding his fiscally idiotic conceits.

De Blasio will happily invite all the poor, all the immigrants and all the criminals to move in—to your house.

And then call you a racist when you complain.

de blasio is an oaf.

New York should bear the worst of humiliations for electing this obama of an malignant moron as mayor.

I’m sure there’s more of a local story to his unfortunate elevation.

As I remember, New York City was just getting to the end of their rope with Michael Bloomberg and his nutty soda-wars, so, in comparison, De Blasio (not his real name), may have seemed less “eccentric”, perhaps?

de Blasio is a Jerry Brown on steroids.