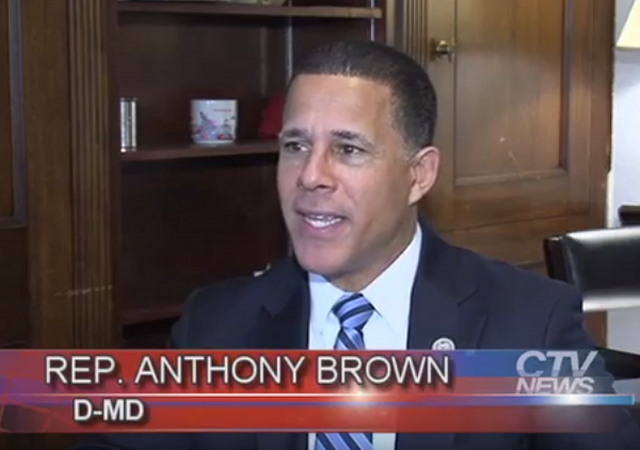 Who gets to define what counts as hate speech? I’m guessing it’s Brown and people who agree with him.

Maryland Congressman Anthony Brown announced last week a bill he plans to introduce that, if enacted, would seek to curb hate speech in higher education.

At an event at the University of Maryland – College Park, the Democratic congressman — who recently stated that President Donald Trump is “unfit for office” and blamed the president for an increase in prejudicial behavior on college campuses nationwide — said the legislation would mandate universities to demonstrate they have the means to define “what is acceptable speech and what is not acceptable speech.”

The “Creating Accountability Measures Protecting University Students Historically Abused, Threatened and Exposed to Crimes” or CAMPUS HATE Crimes Act would withhold federal funding to a university unless it demonstrates to the Department of Education that it has “adopted and implemented a program to prevent and adequately respond to hate crimes within the jurisdiction of the institution or by students and employees.”

Although the measure would state that the college’s plan of action should prohibit and define violence, vandalism, or other crimes which targets someone based on their gender, gender identification, race, religion, and other standard background identifications, there is no limitation on what the school’s standards may be in targeting hate speech, even if the school “should spell the difference between hate crimes and constitutionally protected hate speech and what makes hate crimes unique compared to other violent crimes.”

This headline and story appear, both from the excerpt posted here and from the description on Brown’s own web site, to be thoroughly dishonest. Brown’s proposed bill targets hate crimes, not “hate speech”. It says nothing at all about banning speech, and in fact specifically points out the difference: “Institutions of higher education would also be required to educate students about what makes hate crimes unique from constitutionally protected speech.”

It also calls for hate crimes to be reported to local law enforcement, rather than be dealt with internally, which is exactly what everyone here seems to think when it comes to sex crimes, so we should be applauding this, not condemning it.

A bill targeting hate crimes on campus is pointless grandstanding, because there is no crisis and the normal legal process is enough to deal with it. But if there were such a crisis then such a bill would be entirely appropriate.

As a conservative constitutionalist I want to thank you for clarifying the issue. Freedom of speech is essential whether it be in the private, public square, or collegiate arena.

I’m unsure of why college administrators should be required by another law to report crimes, including hate crimes or rapes. That should already be a given. refusal to report crimes should make colleges liable to civil action as well as possibler criminal action.

As we’ve already seen numerous times, colleges are unequipped to even internally handle cases of rape accusations. It’d seem they either have no clue or don’t care about Due Process. I could support a law forbidding colleges, especially student governments, from handling accusations of crimes, but rather requiring them to be reported to the appropriate authorities.

. I could support a law forbidding colleges, especially student governments, from handling accusations of crimes, but rather requiring them to be reported to the appropriate authorities.

Which seems to be exactly what this bill would do.

Pronouncements that could be termed “hate speech” are exactly what the ‘free speech’ section of the First Amendment is meant to protect! There would be no need to protect speech that was popular, would there?

I don’t expect today’s college students, or administrators, to understand this; they have shown that straight forward, simply worded English is beyond their comprehension. This leads me to wonder what is being passed off under the guise of language instruction these days. Apparently it is something less than I received in elementary school!

You’re so right. That’s exactly what the Framers of the Constitution intended. Yet a number of progressives have publicly said on TV that the Constitution, especially the Bill of Rights, DOES NOT apply to alt right, conservatives, libertarians, and Republicans. These Leftists are nothing less than Jacobins

All I can see that this bill does is add a layer of bureaucracy to what schools are currently doing. They have to send reports about their procedures for handling “hate crimes” to the feds if they want to keep some of the money taps open. Annoying, perhaps, but it doesn’t sound particularly nefarious.

The dear colleague letters that were sent out as part of title ix enforcement, with regards to sexual misconduct on campus, didn’t seem so bad at first either.look at how that turned out with the extra cost of administration on these campuses and the Orwellian structures for dealing with reports of sexual assaults on campus. Don’t give the bureacrats any more power.

And the cost of feeding all of those kangaroos.

I didn’t know we had that many Bogans in universities here. 😉

This is partially why college tuition is so high. There are so many administrative requirements for various programs that require a director of this or assistant of that that colleges are top heavy with highly paid paper pushers who make sure the government gets their due. It’s all tucked neatly under the guidance of Student Affairs. It takes a lot of money to keep the government happy.

I’d add to you great comment that the nature of government scholarships add to the cost of tuition. With colleges knowing there’s a government trough for students, they’re encouraged to raise salaries and other costs, adding to tuition growth.