London Pulls Uber’s License to Operate in the City

London Pulls Uber’s License to Operate in the City 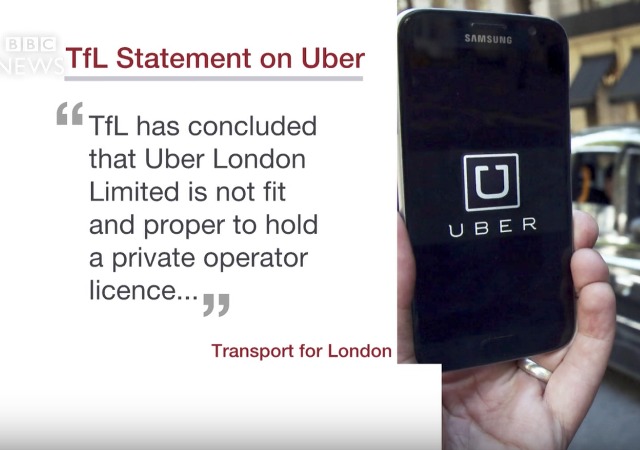 Regulators in London have revoked Uber’s license to operate in the city, which can affect 40,000 drivers. From Bloomberg:

Regulators in London faulted Uber’s safety and security practices in revoking its permit starting at the end of the month, concluding the company is not “fit and proper to hold a private hire operator license.”

The company has 21 days to appeal, and can continue to operate during the appeal process. “We intend to immediately challenge this in the courts,” said Tom Elvidge, general manager of Uber in London.

Uber has faced resistance in markets from Paris to the Philippines, but London’s ruling is one of the most aggressive to date. The decision pits the popularity of the free-wheeling company among millions of customers, against regulators and taxi drivers who want tighter controls over the company’s operations.

The outcome also has financial implications for Uber at a time when its backers are in talks involving a potential $12 billion stake from SoftBank Group Corp. and other investors. London is one of the most established and lucrative markets for the company valued at about $70 billion.

As Uber has upended the global transportation industry, it has also invited controversy. City officials cited Uber’s use of a secret software tool called “Greyball” that the company built to avoid regulators. Uber was also accused of failing to report crimes or conduct background checks on drivers. Authorities faulted Uber earlier this year for allowing a London driver who had sexually assaulted a rider to get back on the road.

Uber’s “approach and conduct demonstrate a lack of corporate responsibility,” the regulator, Transport for London, said in a statement.