Lawsuit Claims Warrantless Searches of Electronics at Border are Illegal

Lawsuit Claims Warrantless Searches of Electronics at Border are Illegal

“I felt humiliated and violated.” 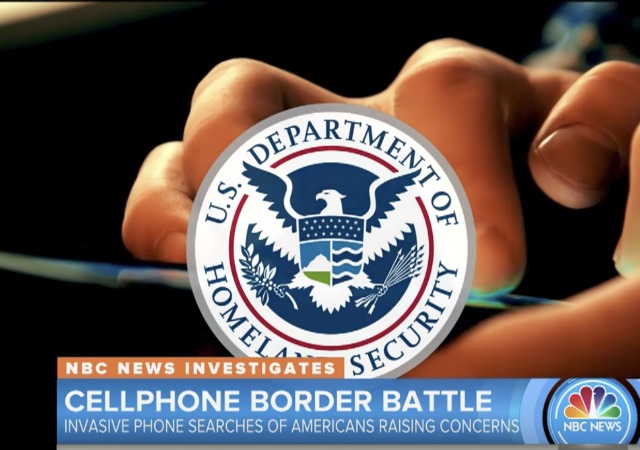 The Electronic Frontier Foundation (EFF) and American Civil Liberties Union (ACLU) have filed a lawsuit on behalf of eleven people against the federal government to end warrantless searches of electronics at the border by the Department of Homeland Security (DHS). From The New York Times:

The lawsuit, filed Wednesday by the American Civil Liberties Union and the Electronic Frontier Foundation, claims the plaintiffs’ First and Fourth Amendment rights were violated when United States agents searched, and in some cases confiscated, their devices without a warrant. The government has said those searches happen to fewer than one-hundredth of one percent of international travelers, and that they are authorized by the same laws that allow border agents to look through suitcases without a judge’s approval.

But privacy activists say the laws, which were crafted with luggage in mind, shouldn’t apply to digital devices that contain vast amounts of personal data related to the device owners and others they have contacted.

The Knight First Amendment Institute at Columbia University tried to find out how the government uses “its authority” with electronics by filing Freedom of Information Act requests, only has “heavily redacted reports.” The New York Times continued:

Jameel Jaffer, the institute’s executive director, said that the searches could have a chilling effect on journalists, lawyers and doctors, who often travel with their devices and have a professional obligation to shield the identities of their sources, clients and patients and the information they provide.

“It’s hard to see how the kind of unfettered authority that border agents have been invested with can be reconciled with the limits the constitution places on government power,” Mr. Jaffer said.

The lawsuit states that these searches violate the plaintiffs’ First and Fourth Amendments while asking “the court to enjoin border officials from confiscating or searching anybody’s tech devices absent a warrant based on probable cause, and to make them expunge any information they’ve collected from the plaintiffs’ devices.”

EFF wrote that the plaintiffs of the lawsuit “include a military veteran, journalists, students, an artist, a NASA engineer, and a business owner” and many “are Muslims or people of color.” EFF continued:

All were reentering the country from business or personal travel when border officers searched their devices. None were subsequently accused of any wrongdoing. Officers also confiscated and kept the devices of several plaintiffs for weeks or months—DHS has held one plaintiff’s device since January. EFF, ACLU, and the ACLU of Massachusetts are representing the 11 travelers.

EFF also offered comments and descriptions of the searches:

Plaintiff Diane Maye, a college professor and former U.S. Air Force officer, was detained for two hours at Miami International Airport when coming home from a vacation in Europe in June. “I felt humiliated and violated. I worried that border officers would read my email messages and texts, and look at my photos,” she said. “This was my life, and a border officer held it in the palm of his hand. I joined this lawsuit because I strongly believe the government shouldn’t have the unfettered power to invade your privacy.”

Another plaintiff was subjected to violence. Akram Shibly, an independent filmmaker who lives in upstate New York, was crossing the U.S.-Canada border after a social outing in the Toronto area in January when a CBP officer ordered him to hand over his phone. CBP had just searched his phone three days earlier when he was returning from a work trip in Toronto, so Shibly declined. Officers then physically restrained him, with one choking him and another holding his legs, and took his phone from his pocket. They kept the phone, which was already unlocked, for over an hour before giving it back.

“I joined this lawsuit so other people don’t have to have to go through what happened to me,” Shibly said. “Border agents should not be able to coerce people into providing access to their phones, physically or otherwise.”

According to the most recent data available, there were nearly 15,000 searches from October 2016 to March 2017, compared with 8,383 in the same period a year before.

Continue reading the main story
David Lapan, a spokesman for the Department of Homeland Security, said he could not comment on pending litigation but that “we absolutely believe the searches are lawful.”

Joseph B. Maher, the acting general counsel of DHS, penned an op-ed in USA Today to defend the searches:

These electronic media searches have produced information used to combat terrorism, violations of export controls, and convictions for child pornography, intellectual property rights violations and visa fraud. This authority is critical to our mission, and Customs exercises it judiciously. Electronic searches affect less than one-hundredth of 1% of all arriving travelers.

The Supreme Court has explained that the “government’s interest in preventing the entry of unwanted persons and effects is at its zenith at the international border.” Still, Customs has proactively developed a disciplined policy with proper oversight for searches of electronic devices.

Maher writes that courts have agreed with the practice, but he conveniently left out a 2014 Supreme Court decision:

The Supreme Court decision making it harder for the police to search cellphones without a warrant could change procedures around the country, police officials and legal experts said Wednesday.

In an opinion hailed as a major advance for personal privacy in the digital age, Chief Justice John G. Roberts Jr. wrote that cellphones are tiny computers that can be said to contain “the privacies of life.” And so the opinion concluded that the message for police in most cases is simple: “get a warrant.”

So when I fly the government has the right to stick their hands in my pants but can’t look at your cell phone….,I want a warrant next time before I’m groped!

When you fly commercially, you have entered into an agreement with a commercial carrier that you will abide by the processes and procedures required of passengers by the carrier. This includes subjecting oneself to the security procedures of the TSA. (If this agreement is not explicitly spelled out in the small print that comes with your ticket, it’s certainly implied.)

A US citizen crossing a border to get back into the country he has a right to return to is a completely different situation.

What are they watching for at the border? Disease vectors, dangerous weapons, narcotics, persons and animals which are not supposed to be here, smuggling (that’s solely financial, not a matter of safety).

In a technological environment in which the individual can upload all his data to remote storage, cross the border, then download the data back into a local device, anyone intending actual harm with said data can easily evade the Border Patrol. This raises a question: Does the Border Patrol/DHS have the authority to demand access to a traveler’s remote storage?

I’ve worked for companies where the standard procedure for crossing the border on a business trip was to image the hard drive to company network storage, pull the drive, and cross the border without it. Upon arrival, you requested a replacement HD from the local office and downloaded the image on to your new HD. The rationale was that with nothing to search, you wouldn’t get stuck at customs and miss your flight.

SO, you once accidentally caught something while on a fishing expedition, therefore all fishing expeditions are allowed? I don’t remember there being a “stopped clock” clause in the Constitution. Can someone please point it out to me?

Their complaint is valid, but their case is not. It’s well-established law that the fourth amendment does not apply at border crossings. Only the Supreme Court can change that. The government is simply taking advantage of this to search for things they never could do anywhere else.

This is how you displace “well-established law”. You push back against it.

“Huh, my password doesn’t work. Oh, well. I’ll just have to contact my IT support when I get to my destination to see if it can be remotely reset.”

I went to law school 40 years ago but I remember that back then the Constitution had limited application at the border. The 4th Amendment did not apply.

Well, technically it applies, but remember that it only forbids unreasonable searches. In the eighteenth century, just as now, border searches were considered reasonable, and are thus permitted with neither warrant nor probable cause. The mere fact that you’re crossing a border gives the government the legal right to search you for anything it likes.

I ran an international adoption agency for 20 years. We always told our clients that their electronics were subject to search when they entered any country, including the US on their return from their adoption trip. Many flatly didn’t believe us. Including some who got a rude surprise at the border. Whenever I traveled I always had a business only laptop that I took with me. None of my personal stuff on it. I didn’t like the idea of Feds going through family pictures, or how I really felt about certain relatives! I would also buy a disposable cell phone in the other country and cut up the sim card before I threw it away. But I am a privacy buff who generally refuses to give out my social security number unless legally required to do so. So it may just be me.

A point that has not yet been discussed: there may be a difference between a search of a US citizen at the border trying to return home, and a foreign national seeking to enter the country.

Could we agree that the former has certain rights at the border that the latter does not have?

Search of electronics of US citizen –> warrant first

Search of electronics of foreign national –> go for it

Search of luggage of either –> established law and procedure applies.

Legally there is no difference.

Customs has the authority to search any person, including any storage items [luggage, bags, etc] in his possession for contraband. Contraband is anything which can not lawfully be possessed in this country. So, it is probably legal for Customs to inspect your electronic storage media, including cellular telephones, tablets and laptops for contraband. What they can not do is to inspect the contents of or copy items which are obviously not contraband. This would include emails and documents which do not have any graphic attachments, common programs and apps, address books and assorted lists and equipment usage records, as none of these would be considered contraband.

It is likely that the courts will limit the extent of the inspection of the contents of electronic devices. But, I do not see it requiring any kind of warrant for Customs to ispect such items which are entering the country.

in an age where a phone can be equipped with Semtex or other blowuppable stuff examining phones is no different than a body search.
i no longer travel, but can’t understand the big Hoo-ha about this.
for business people and frequent travelers there is a simple solution have a cheap throwaway phone while traveling and your good phone at home or office.

i think that keeping an eye on objects that may be used to detonate is a safer option and though highly inconvenient.
————————————————-

Commercial passenger airliners and cargo aircraft have been the subject of plots or attacks by bombs and fire since the near the start of air travel. Many early bombings were suicides or schemes for insurance money, but in the latter part of the 20th century, assassination and political and religious militant terrorism became the dominant motive for attacking large jets. One list describes 86 cases related to airliner bombings, 53 of them resulting in deaths.[1]