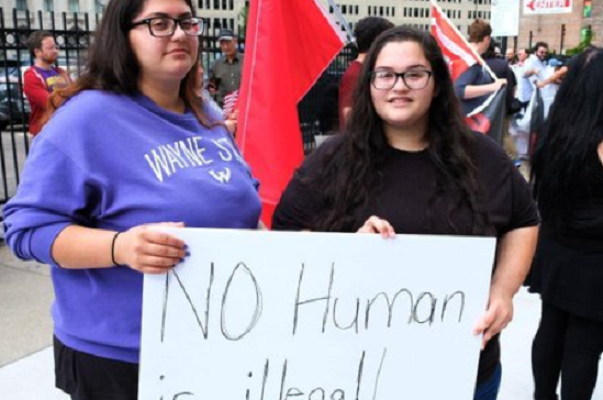 Iraqi nationals detained by ICE for deportation have gone on a hunger strike in a detention facility.  They are protesting their detention and their eventual deportation.  The federal government has said that these Iraqis are being deported because they have committed crimes.

Some Iraqi detainees swept up in immigration raids in Metro Detroit this summer are on a hunger strike, saying they would rather die closer to their homes than be deported.

Seven of the dozens of detainees held at the Northeast Ohio Correctional Center for more than three months have gone 72 hours without eating as of Friday afternoon to protest their captivity, officials said.

The seven have been placed under medical supervision, and seven more have since joined the cause, according to U.S. Immigration and Customs Enforcement.

“They continue to be offered three meals daily and provided an adequate supply of drinking water or other beverages,” ICE spokesman Khaalid Walls said. “Several other detainees have been randomly refusing the facility’s prepared meals over the last several days and are being monitored by facility staff.”

Families of detainees, meanwhile, say the center was on a 23-hour lockdown Friday because of the number of detainees participating in the hunger strike, which they believe has grown to about 50.

The families of the Iraqi nationals are complaining that the crimes for which they are being deported are “minor” or “happened years ago.”

The U.S. government has said the detainees are being deported because they committed crimes. Families say some of the crimes were minor and some were committed years ago, and that the detainees served their time.

Families of the detainees say they fear they could be persecuted in Iraq because of their Christian faith. Detainees and their families have sought to suspend the deportations so they can further argue in court that sending them to Iraq would be dangerous.

There is a hunger strike among Iraqi detainees being held in Youngstown. https://t.co/FRWdJE2WVd

Those ladies waited too long to go on a hunger strike.

You beat me to it! Oh, the irony. Somehow I suspect their hunger strike would last about two hours.

This could solve the problem with deporting them. Just sayin’.

the crimes for which they are being deported are “minor” or “happened years ago.”

Well, then, let’s list each of the deportees/ crimes before we ship their worthless asses out. Anyone can claim to be “Christian” and still commit crimes. I understood many of these are thug life gang-related. How is that Christian?