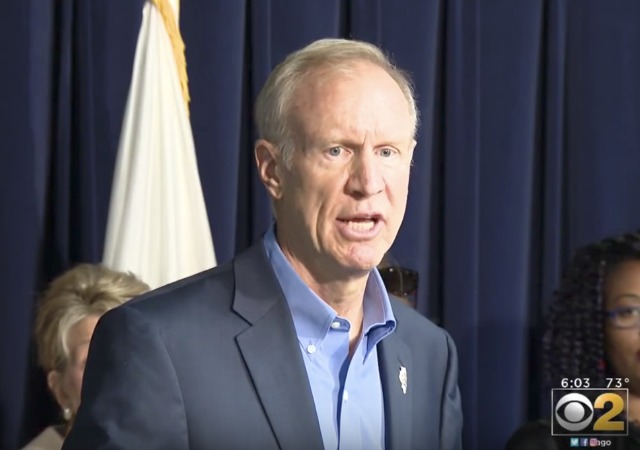 Republican Illinois Governor Bruce Rauner has angered the party and conservatives after he signed a bill that will allow Medicaid and state employee insurances to cover abortion.

The new law expands taxpayer-subsidized abortions for women covered by Medicaid and state employee insurance. The state already covers abortions in cases of rape, incest and when there is a threat to the health and life of the mother. The law expands the Medicaid coverage beyond those limited cases. Illinois Right to Life, which opposed the bill, projected that the measure could mean 12,000 additional abortions per year. Another group, however, put the figure at 3,800 a year.

The expansion of public funding for abortions is opposed by those who say it violates a longstanding principle that taxpayers should not have to foot the bill for a procedure that they might oppose on moral or religious grounds. But supporters of the legislation say the limits on abortions for women who are covered by Medicaid or state employee insurance create unfair burdens and hurdles.

In addition, the law would prevent a trigger in current Illinois law that abortion rights supporters contend would make the procedure illegal in the state if the U.S. Supreme Court overturned its landmark 1973 Roe v. Wade ruling.

Rauner’s decision should not shock the GOP or conservatives. First off, it’s Illinois (my home state) and Republicans are generally Democrat-lite. Secondly, Rauner has always supported abortion rights as he reiterated in his announcement:

Rauner, who has long supported abortion rights, said that in the end, he has “to be consistent with my values.”

“I also believe that no woman should be forced to make a different decision than another woman would make purely based on her income,” he said. “I believe that a woman living with limited financial means should not be put in the position where she has to choose something different than a woman of higher income would be able to choose.”

The Democrat-controlled legislature had the bill ready in the spring and passed it in May. At the time, though, the legislature and Rauner fought over a budget, which led Rauner to threaten to veto the abortion bill. He found the bill divisive, but said he would keep the portion that kept abortion legal in Illinois.

Back in 2014, Rauner told an abortion rights advocacy group that he did not like “the Illinois law that restricts coverage under the state Medicaid plan and state employees’ health insurance.”

So either way Rauner was going to break a promise.

Rauner made a courtesy call to Cardinal Blase Cupich, the archbishop of Chicago, before he announced his decision. Cupich told Rauner of his disappointment in the bill and that Rauner broke the promise he gave to those who opposed the bill that he would choose to veto it:

“I reminded him of the promise and also my statement earlier thanking him for that,” Cupich told the Tribune on Thursday evening. “He did break his word. He broke his word to the people, especially those who have continued to speak on behalf of the vulnerable child in the womb.”

The governor, at a news conference Thursday, discussed his change of position.

“I tried in the spring, and I’ve tried for months as this bill was debated and ultimately passed, to find common ground with both sides of this issue,” Rauner said. “We were unable to do that. The passions run too deep.”

Republicans in the legislature also lashed out at Rauner for his broken promise, especially since he recently upset them after he signed the Trust Act, which prevents authorities from detaining illegal immigrants based on their immigration status. The Chicago Tribune continued:

Perhaps the most stinging critique was leveled by Rep. Peter Breen, the House Republican floor leader from Lombard.

“I’ve had a front-row seat to a governor that is unable to adequately and competently administer Illinois government,” said Breen, a prominent anti-abortion rights attorney. “He is now lying to us. And so at that point, I can’t support someone like that.”

Breen also charged that Rauner had made his veto pledge to Cupich, and that “even the most corrupt Chicago machine politicians think twice before lying to a priest.”

However, Illinois Republican party Chairman Tim Schneider blamed the Democrat House Speaker Mike Madigan and the Democrats, who he claimed are trying to divide the GOP and get a Madigan-backed governor candidate in office. From The Chicago Sun-Times:

Time for voters to “abort” these Nazi Democrat Pols at the voting booth.

He’s a “Republican” who got elected in the state of Illinois, the flyover country version of California. What else would you expect from him?

What part did f him is Republican?

The part that is going to take the blame for decades of Democrat shenanigans.

(“See what happens when you elect a Republican governor? SEE??”

What part of him is Republican?

Sorry, strange things happen with this phone and my thumbs. Obviously need to do the preview more often, though that won’t help with the phone from h€££.

Illinois, where even the Republicans are Democrats…

“I tried in the spring, and I’ve tried for months as this bill was debated and ultimately passed, to find common ground with both sides of this issue,” Rauner said. “We were unable to do that. The passions run too deep.

Tried to find common ground? In abortion? There is no common ground. For it, against it. No small surprise he is for it. Why did I waste my time voting for him?

So, wonder who will be the biggest users of this legalized murder, huh?