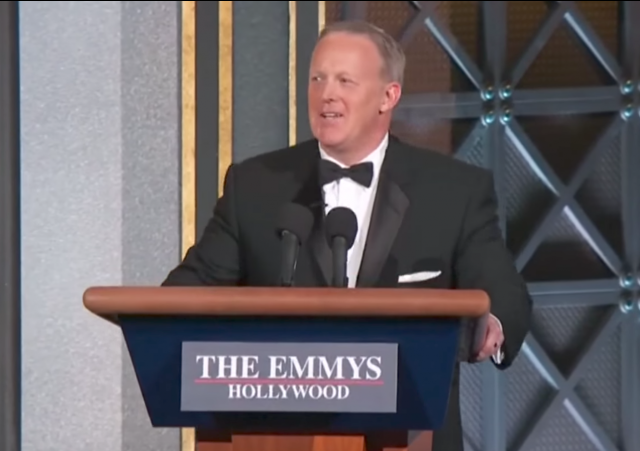 The award show, its attendees, and the media covering this self-aggrandizing party, which is now drenched in left-leaning politics, was shocked, SHOCKED! that Spicer would show his face in such a venue, let alone be somewhat funny.

Given the headlines, I assumed Spicer had a fairly lengthy sketch and said some relatively harsh things to have drawn the ire he received. And then I watched the clip. Spicer wheeled out a likeness of the White House Press podium and uttered one line. Just one.

“This will be the largest audience to witness an Emmys. Period. Both in person and around the world,” Spicer said, joking about his defense of Trumps inauguration crowd size.

And yet, here’s how his cameo was treated by the press: 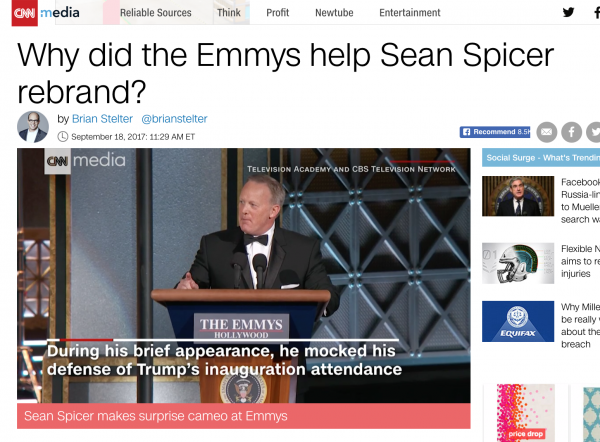 All the news that’s fit to print, or something:

DEMOCRACY DIES IN DARKNESS, YOU GUYS: 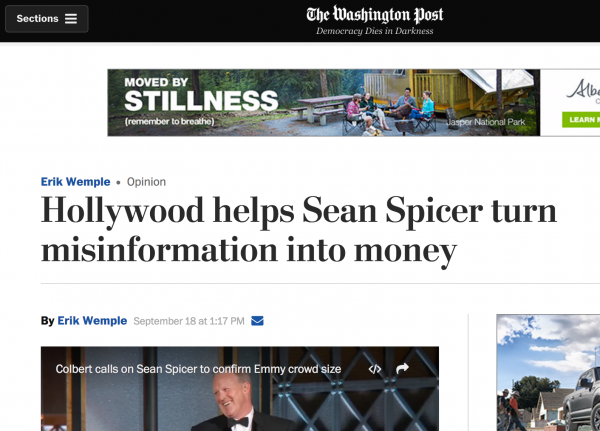 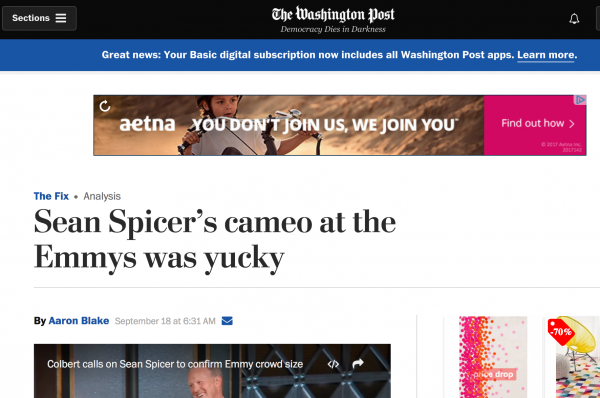 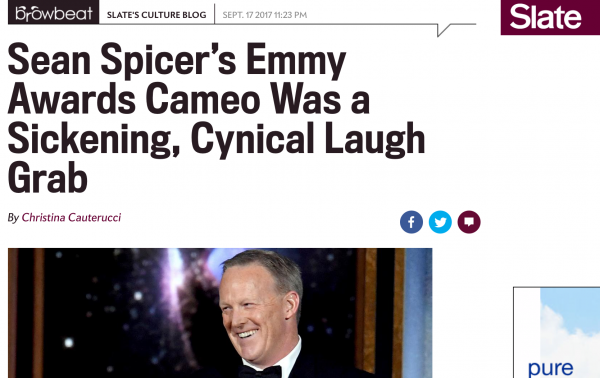 Not surprisingly, viewership of this year’s Emmys matched last year’s all-time low. But keep it up media bubbles. Nothing calls consumers to your cause like perpetually maligning, mocking, and crapping on half the country and hyperventilating over something as silly Spicer making fun of himself.

This, Dear Media, is why everyone hates you.

Humorless scolds don’t care if you don’t watch them or don’t like them.

They simply work take away all your other viewing options. Or any other options. Because humorless scolds know best.

And anyone who disagrees is a deplorable racist. They will come for the deplorables re-education soon enough.

If they come, they’ll leave in body bags.

The Left is acting like Spicer barged his way onto the stage and grabbed the microphone. They do realize he was invited to do that bit and if they weren’t so lacking in humor other than mean & nasty, they would have thought it sort of funny.

One of the prime sources of good comedy is being able to hold a mirror up to the world and mock the things we humans do that make little or no sense. Like Carlin and Stuff, or Chris Rock and being pulled over by the police. The comic’s goal should be ‘is this funny’ instead of ‘will this be accepted by my peer group.’

If you don’t offend somebody as a comic, you’re failing.

If you offend all the right people, you’re a success.

It was a bunch of leftists of the Hollywood tribe that booked him for the awards. Now other leftists in the media tribe want to rebuke that choice. Proof of how leftist tribal politics dysfunction.

Personally I’d rather have a Cow.