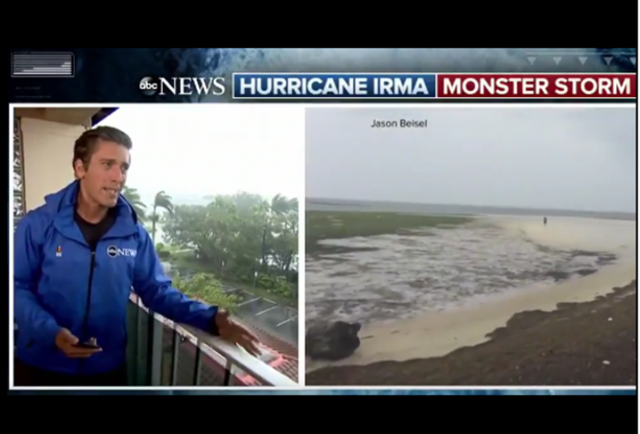 The nation’s eyes are on Florida this weekend, as Hurricane Irma storms through the Sunshine State.

Once rated as a Category 5 tempest, Irma has expended enough energy buffeting the coast that it now “merely” meets Category 3 criteria.

Naples and Marco Island will endure some of the strongest winds in the next few hours, the National Hurricane Center said.

Irma, now a Category 3 hurricane, is bringing 120 mph winds as it hugs the southwest Florida coast.

Even more dangerous than the powerful winds could be the storm surges that threaten to swallow Florida’s coastal cities.

“The threat of catastrophic storm surge flooding is highest along the southwest coast of Florida, where 10 to 15 feet of inundation above ground level is expected,” the hurricane center said. “This is a life-threatening situation.”

Social media has been keeping apace with the storm. Interestingly, the phenomenon of “negative surge” was documented as people monitored the beach areas as Irma headed their way.

WATCH: Incredible video of negative storm surge in parts of Florida, water being pulled out and away ahead of #Irma: https://t.co/hQqaXZp82s pic.twitter.com/foZvt4m1P3

Basically, Hurricane Irma is so strong and its pressure is so low, it’s sucking water from its surroundings into the core of the storm. It happened in the Bahamas on Friday and Saturday, and now it’s happening on the Gulf Coast of Florida on Sunday.

On Saturday, the wind on Long Island in the Bahamas was blowing from southeast to northwest. So on the northwest side of the island, water was getting pushed away from the shoreline.

It also may have been experiencing the effects of what I call the hurricane “bulge.” In the center of the storm, where there is extreme low pressure, water is drawn upward. Low pressure is basically a sucking mechanism — it sucks the air into it, and when it’s really low, it can change the shape of the surface of the ocean. As the storm draws water toward the center, it gets pulled away from the surroundings.

Unlike tsunamis, in which the water recedes significantly before the waves hit, the waters should return to their normal levels relatively slowly. However, remaining on the exposed sea bed is not recommended.

As with Hurricane Harvey, we are seeing the crisis bring out the best in people. Sadly, social media is also covering some of the worst.

So THIS is why they stayed behind.

People deciding that they want to experience a major hurricane up-close-and-personal, who need to be rescued.

A daring couple in Florida thought they could ride out Irma in a sailboat. They quickly had to be rescued. https://t.co/OJPpWNBqtV pic.twitter.com/GZUsmC8WjV

#Irma with regard to the 2 dogs left alone, check update from man who filmed them 2nd post https://t.co/OV6N9gRjyX pic.twitter.com/wnfjCfoYEh

And these aren’t pets who are just being left inside, Director of Animal Care Diane Suave said.

“They are left in a yard, in a pen they cannot escape from or tethered to trees or poles,” she said.

One of the lessons learned from Hurricane Katrina was the need for shelters that accommodate pets. In the panhandle area of Florida, which does not appear to be on Irma’s route at this point, there are shelters opening up for horses and humans.  Additionally, animal shelters across the country are preparing for an influx of four-legged refugees.

Americans across the country will be watching Hurricane Irma, and we will pray for the safety of Floridians and for a speedy recovery from this devastating storm.

Downtown Miami looks like a watery war zone. This is more than 100 miles from #Irma‘s eye pic.twitter.com/F71QYi0Vd2

Since this piece initially published, Irma has been further downgraded to a Category 2 hurricane and is expected to weaken further over the next 24 hours.

The National Hurricane Center said Irma’s winds were at 110 mph, just below major hurricane status, as the center of the still dangerous and wide storm moved farther inland late Sunday afternoon. It was smacking Naples after coming ashore in Marco Island at 3:35 p.m.

The hurricane center says “although weakening is forecast, Irma is expected to remain a hurricane at least through Monday morning.”

The center says the eye of Irma should hug Florida’s west coast through Monday morning and then push more inland over northern Florida and southwestern Georgia Monday afternoon.

It’s a Category 2 now (5:45 p.m.). Apparently it will stay over land, having come ashore at Marco Island, so that may limit the storm surge on the western FL coast.

Miami’s ignoramus mayor on Hurricane Irma: ‘If this isn’t climate change, I don’t know what is’
http://www.miamiherald.com/news/weather/hurricane/article172080587.html

Some reading for Miami’s ignoramus mayor:

You have to give him credit for speaking the truth.

Speaking the truth? Speaking ignorance and using a hurricane and peoples suffering and fears for political purposes. Vile man!

Read carefully – he said “If this isn’t climate change, I don’t know what is.” I take this statement on face value and would emphasize the latter half.

After a record quiet period for hurricanes, the US gets hit by two. Climate superstition and junk science immediately jumps up to category five.
https://www.youtube.com/watch?v=29sHzrz3r3c

Hurricanes are analogous to stirring bars in chemical reactors: their function is to re-balance variations in temperatures. Indeed, the use of stirring bars was likely inspired by observing hurricanes.

One interesting and common “experiment” made by inexperienced people in the lab is to forget the stirring bar (or boiling chips) until after the heating has already been turned on. This can result in a memorable splash of the contents of a flask all the way to the lab ceiling, because the sudden mixing releases ferocious gas bubbles.

This of course suggests some ways to tamp the power of these natural storms, using forced, low-intensity of mixing of our atmosphere. This would require some interesting engineering and large public works in the Gulf of Mexico. Only God knows what that would do to the rest of the world’s weather patterns.