Adding prayers for California to those for Texas. 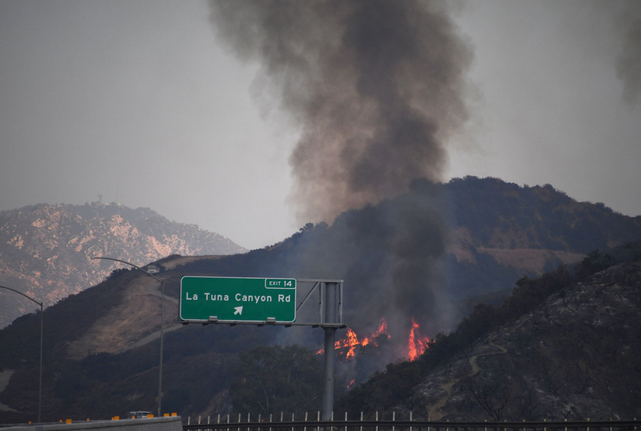 President Donald Trump has called for a national day of prayer in the wake of Hurricane Harvey.

Hopefully, my fellow Americans will direct a few prayers to California as well. Hundreds have been forced to evacuate as the largest wildfire in Los Angles history rages.

Firefighters assisted by water-dropping helicopters worked around-the-clock in an attempt to get the upper hand on the blaze dubbed the largest in terms of acreage within Los Angeles city limits, according to Mayor Eric Garcetti.

The fire has spurred both voluntary and mandatory evacuation orders for hundreds of homes in Los Angeles, Burbank and Glendale.

Authorities Sunday evacuated about 30 homes in the Castleman Estates area. Most of the evacuation orders for Burbank were lifted to residents late Saturday.

The fire broke out Friday afternoon, and the cause is not yet know. At nearly 6000 acres, the La Tuna fire is now the largest fire by acreage ever  in Los Angeles and a local emergency has been declared.

The entire state has been gripped in a heat wave, which has made the battle even more challenging for firefighters.

Salinas and King City each reached all-time high temperatures, according to the National Weather Service, of 107 and 115 degrees respectively.

Numerous records were set for the day Saturday, including in San Francisco, San Jose, Santa Cruz, Santa Rosa and at Oakland International Airport.

As the heat wave is continues Sunday, citizens are using social media for updates and to offer assistance.

????”@MarkSpatny: Interactive google map with the most updated info on the #evacuation areas & #shelters ????#LaTunaFire: https://t.co/HG5Hv5ULte

And, of course, many are offering prayers as well.

Our prayers are with all those affected by the La Tuna Canyon fire. #latunacanyon #fire #burbank #glendale #sunland #latunafire pic.twitter.com/9MTnQrcGeA

How much damage could have been avoided if effective brush clearance was allowed?

Forest fires are a natural and necessary occurrence, clearing dead trees and killing disease and eliminating vermin. Not allowing them to burn results in great fires that leave behind less seed sources. Smaller fires need to be allowed to burn to reduce the fuel for a conflagrations like this. Logging and grazing helps as well. But much of all three have been eliminated environmentalists since – can you guess – the sixties. Hence, the “megafires” infesting the United States, and making forest arson a weapon of choice for terrorists.
https://www.nifc.gov/fireInfo/fireInfo_stats_totalFires.html

The bad effects of liberalism march on.

At least in Oregon, all the fires are on U.S. Forest Service land … government-owned land, and not a single blaze on private land.

What’s more, the Indians used to use fire to do exactly what you described because, once the brush was removed, it improved (and probably simplified) their hunting grounds. Back when Yellowstone burned in ’88, environmentalists were aghast and furious and claimed that the Park was ruined. But in the spring, grasses and wildflowers arrived on schedule and–to environmentalists’ collective surprise–deer in the new meadows.

there has been, AFAIK, almost ZERO damage, just chaparral burning as it is supposed to, albeit after a loner period of time between burns than is optimal. this is the nature of things here, as it has been long before man, even Indians, came along.

A prayer for California? For the self-inflicted fires? Certainly! Borrowing from “Fiddler on the Roof”, bless and keep them FAR away.

the chaparral NEEDS to burn, and every few years at that.

it clears out the dead material, and causes many seeds to germinate, since they won’t otherwise. when it doesn’t burn on schedule things get stupid, and the upper soil actually gets incinerated, due to too much fuel on hand, when it finally does. fire prevention is stupid, as is building regular houses at the wild/urban interface.

last i heard, only one structure/home had burned.

as for the source, the LAFD says is started right next to La Tuna Canyon Road. Cigarette? hot chunk out the back of a car exhaust? who knows…

we were over in Glendale yesterday visiting the toy store for pick up, and saw the DC-10 just after it finished a drop. the 134, 5, etc, were a mess because everyone was looking, not driving.

it’s going to be a long, smokey, fall here in #Failifornia.

So cal native here – we are in New Jersey this week. I asked a friend in LA about the fire. She said the Station Fire in 2009 was much larger but that this one is within LA City
Limits, which is how they can say,’largest fire ever.’ Be careful of media hyperbole. I am not on the scene but I would be cautious of media exaggerations is all.

the Station Fire was a monster than burned for weeks…

this is nothing, surrounded on all sides by urbanization.