Asking feds to pay for damages 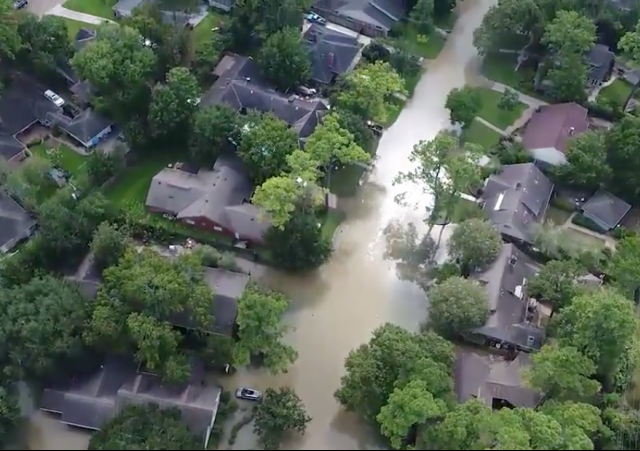 Most of the western Houston area remains under water, but not because of flooding caused directly by Hurricane Harvey.

A complaint filed Tuesday alleges the Army Corps of Engineers knowingly “condemned” homes and businesses when they released water from the Barker and Addicks reservoirs after Harvey had passed.

Residents in the west side of Houston who made it through the storm unscathed, woke up post-storm to find their homes filled with rising water. Interestingly, the attorney is not suggesting the federal government acted improperly, but is requesting they fork over cash to pay for damages.

Video from part of the flooded area:

“When they opened up the dams full blast, several hundred homes that were dry and not yet directly impacted by the storm — including mine —got flooded by the Corps’ action,” Banes said.

Banes doesn’t contend that the Corps did the wrong thing, only that the government must pay for the damages it caused.

“When they make a choice to flood one area to save another, it’s their responsibility to pay for the consequences,” he said.

Banes’ is one of three lawsuits filed Tuesday in state and federal court seeking to hold government agencies liable for flooding from the controlled releases.

A spokesperson for the U.S. Army Corps deferred questions about two federal lawsuits to the Justice Department, but a spokesman had not responded to a request for comment late Tuesday.

The third lawsuit, filed in state court, targets the City of Houston and Harris County Flood Control District for compensation for property losses downstream of the reservoirs.

We watched officials explain prior to releasing water from the Barker and Addicks reservoirs that the goal was to control flooding in some areas to prevent widespread uncontrolled flooding across the board. They also explained (on local news) they were fully aware that meant some residents in the wake of the reservoirs would flood.

In one of the two federal cases, Banes and his eight-person civil law firm, Neel, Hooper & Banes, filed a so-called “takings” claim in the U.S. Court of Federal Claims in Washington, D.C., on the grounds that the Army Corps made a willing choice to save some areas after the storm subsided.

Justin Hodge, an expert in eminent domain at Johns Marrs Ellis & Hodge LLP, said such cases boil down to knowledge and intent — whether the government knew what it was doing and intended to cause flooding that essentially amounted to “taking” of people’s properties.

“The government can’t accidentally take your property,” Hodge said. “If they accidentally opened the lever to the dam or the gates, that would not be a taking — that would be negligence.

“But if the government intentionally floods someone’s property there would be real merit,” he said.

Individuals can’t sue the government for an accident. But if the flooding was intentional and knowing, a person can file a claim. He said historically class actions have occurred in condemnation lawsuits but they’re very difficult to pull off.

“A lot of folks may be directly damaged by the dam releases but an investigation has to be made into each person’s claim,” he said. “I would caution property owners … not to try to jump in and file something without doing an appropriate investigation.”

He added, “I’d caution them to hire a lawyer that’s knowledgable in this area of the law.”

Hodge said in the press conferences in the wake of Hurricane Harvey the Army Corps of Engineers was straightforward about the fact that they knew homes were going to flood from the releases from the reservoirs. He saw statements on the Corps website indicating federal officials had knowledge that flooding would happen.
The government could make such a decision if it was acting in the public interest, he said.

As a sideline law watcher, I’m interested to see how this plays out. I’d think any remediation at all from FEMA insurance or Disaster relief funds, if procured, would also put a grind on their damages claim, correct?

It could, because there are cases from the Ct. of Claims and Federal Circuit that have held that a temporary invasion by the govt to do [something along the lines of] remediation and pollution control is a taking, but the remediation provided more than compensated the land owner. Thus, it resulted in a taking with no provable damages that could be recovered.

Had much the same happen here in 1993. Tuttle was full, the spillway was going at a good clip, and the rain had stopped (for the moment), but Tuttle is a *earth* dam, and showed a slight shifting. They were a couple of hours away from just opening up the spillway all the way, which would have topped all the levees and wiped out a huge chunk of Manhattan (but better than a dam collapse), but they watched and waited, and kept the spillway running at the godawful rate it was until the dam drained down to ‘Whew!’ levels.

Years later and a lot of money spent, and Tuttle is back to being fully stable again.

One major problem is that multi-purpose dams keep the water level high for recreation, which leaves them less space for flood waters. If we had accurate weather prediction, the Corps could open the floodgates a day or two ahead of the storms and gain an edge, but we don’t, so they can’t. The other alternative is to heck with the recreation part of the dam and just leave the reservoir empty year-round until there’s a flood, but that is never very popular.

The plaintiffs are apparently trying to travel on the 2012 SCOTUS decision in Arkansas Game & Fish v. United States. SCOTUS determined a taking occurred in that instance with the USACE released water to help farmers and coincidentally flooded public lands (state owned) and killed timber. But the court did not hold that every release of water by USACE that results in flooding would constitute a taking. Takings analysis is very fact driven and the cases can turn on small differences. Flooding that occurs when the Corps must release water during a natural disaster to avoid bigger problems, such as dam disintegration that might was away more and kill more, is not necessarily going to be a compensable taking. Particulary if defense experts can sufficiently demonstrate that due to reasons beyond anyone’s control, flooding was going to occur anyway, and USACE just made discretionary decisions in their best professional judgment of controlled flooding and when and how it occurred.

I’m pretty sure that the plaintiffs here will have to show that the water releases were “arbitrary and capricious”, and I’m equally sure that there is no way they’re going to be able to do that.

Particulary if defense experts can sufficiently demonstrate that due to reasons beyond anyone’s control, flooding was going to occur anyway,

Surely they’d have to show that flooding of the plaintiffs’ properties would have occurred anyway. The plaintiffs concede from the outset that someone’s property would have been flooded, but not theirs, and when the government decided to save those properties by sacrificing theirs it took them for public use.

The legal path for the Government to take (and the only logical one) is to say that of course they knew properties would flood, but they had no way, in the middle of an unprecedented disaster, to know which properties would and would not flood in the various scenarios.

What they did have was the duty to maintain the integrity of the dam, and when said dam was in danger of being overtopped, which can result in uncontrolled erosion and catastrophic failure (since it was an earthen dam, after all) then it was their duty to mitigate the danger to the population as a whole. And since that was their clear duty under the law, they cannot be found liable for carrying out their legally required duties to protect the general public.

That’s why it’s not a liability case, it’s a takings case. If “carrying out their legally required duties to protect the general public” required them to flood a property that would not otherwise have flooded, then they have taken that property for public use and owe just compensation for it.

idiots should not have built houses there.

Many of these homes are 15-20 miles away and have never before had an issue like this nor are they in a flood plane. And that’s why they’re suing.

Yep…part of this is an emotional issue because these people are dumbfounded that this could happen to them.

lot of issues I have never had happen to me either, doesn’t mean I don’t research stuff and plan/build accordingly.
there’s a reservoir there. there are only a certain number of gates. when certain ones opened water going in this direction.
doesn’t take being a rocket surgeon to figure out some crap.

What would you have them do? Build on stilts or raise the house? I’d be willing to bet many of them are not original owners…do you have any idea how much it would cost to do that?

simple.
don’t move in there to begin with.
no different then people buying or building houses at the end of a runway then complaining about noise.
if you build a house in a spot where opening a gate will flood you (even if its never been used) you are an idiot.

They had no reason to anticipate that the gates would ever be opened to deliberately flood them.

then they are fking idiots.
theres a gate there.
its not there for sh*ts and grins

I know you guys hate the NYTimes and I am not sure if the article below is relevant since the actions were taken to relieve pressure on the dam. But these homes, clearly, must have been close to a waterway. The Times claims that the flood maps for Houston are woefully inadequate(and this is not linked to any claims of Global Warming).

I am not passing judgment. I live on a river, too. But I am 100 feet above it. It doesn’t mean I won’t get eaten by a mud slide one day. I do sometimes wonder because the slope of the hill gets to 20%. For the moment, I do have a very nice view!

Under a bridge. We already knew that.

I choose facts over ideology.
I choose science over religion.
I choose truth over fantasy.
I will return respect for respect and disdain for disdain.

I do live in a beautiful house on a hill overlooking a beautiful river that is clean because of environmental regulations. I can. and do, swim, fish and sail on it. I can take a train that puts me in the center of the city in 26 minutes. I have easy access to museums, great restaurants, libraries, gratifying work and much, much more.

So FU, you redstate hick. What the hell do you have? Your guns? I can have those, too

I’m going to go with they flooded BECAUSE they were in a flood plain. They hadn’t flooded previously because the dam held water back and releases were controlled to prevent flooding. Their luck ran out.

Yep. They did a controlled release near my old home in Houston and flooded it. I feel bad for my old neighbors.

The government should impose a levy on the people whose homes were saved to fund the cost of restoring the homes that were intentionally damaged.

How do these people know that their houses would not have flooded if the dams were damaged?