Hillary repeats herself, first as campaign tragedy, then as Verrit website

Hillary repeats herself, first as campaign tragedy, then as Verrit website

Hillary endorses online platform for her voters, because she won’t just go away.

Karl Marx had Hillary ppegged: History repeats itself, first as tragedy, then as farce.

The Hillary tragedy was decades in the making (Bill philandering, Obama crushing her), culminating in the tragedy of the 2016 election where she lost despite having more votes and despite the entire mainstream media pushing for her. She also lost to the guy who had no chance of winning.

Now Hillary is repeating her humiliation. No, not the book, which is so mocked that even Trump retweeted this image: 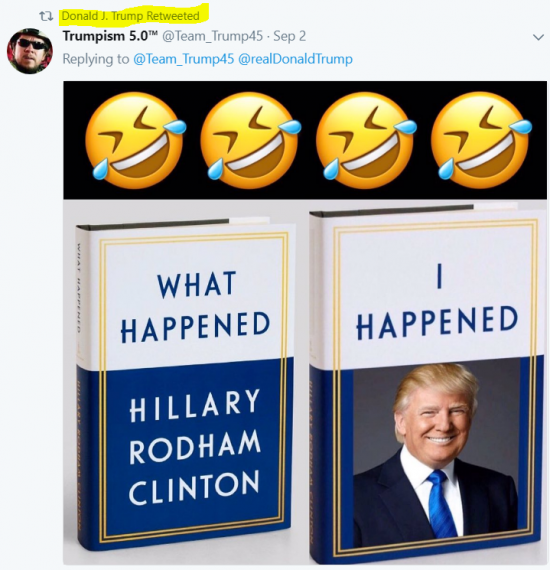 The farce of the day is Hillary’s endorsement of the new website Verrit, billed as the website for the 65 million Hillary voters: 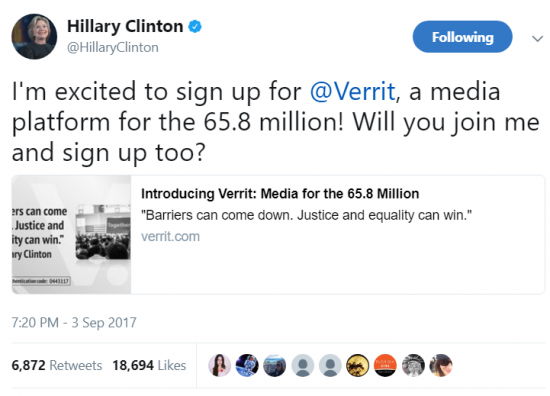 What is Verrit (as opposed to Ferret)?

Gizmodo explains, No One Asked for Verrit, but Here We Are:

On Sunday evening, former secretary of state and presidential candidate Hillary Clinton endorsed Verrit, a “media platform for the 65.8 million” who supported her candidacy, immediately creating a minor Twitter firestorm.

Clinton’s decision to hawk Verrit is regrettable for a number of reasons, including that this site looks like a terrible bet in an already over-saturated media economy which is shedding platforms and publishers left and right.

Verrit’s underlying concept is simple: Users are able to package quotes, factoids and other bits of text into easily shareable social media cards. The cards come with a seven-digit authentication code which can be verified on the website, supposedly ensuring social media users will be able to check to see the information contained within is accurate. 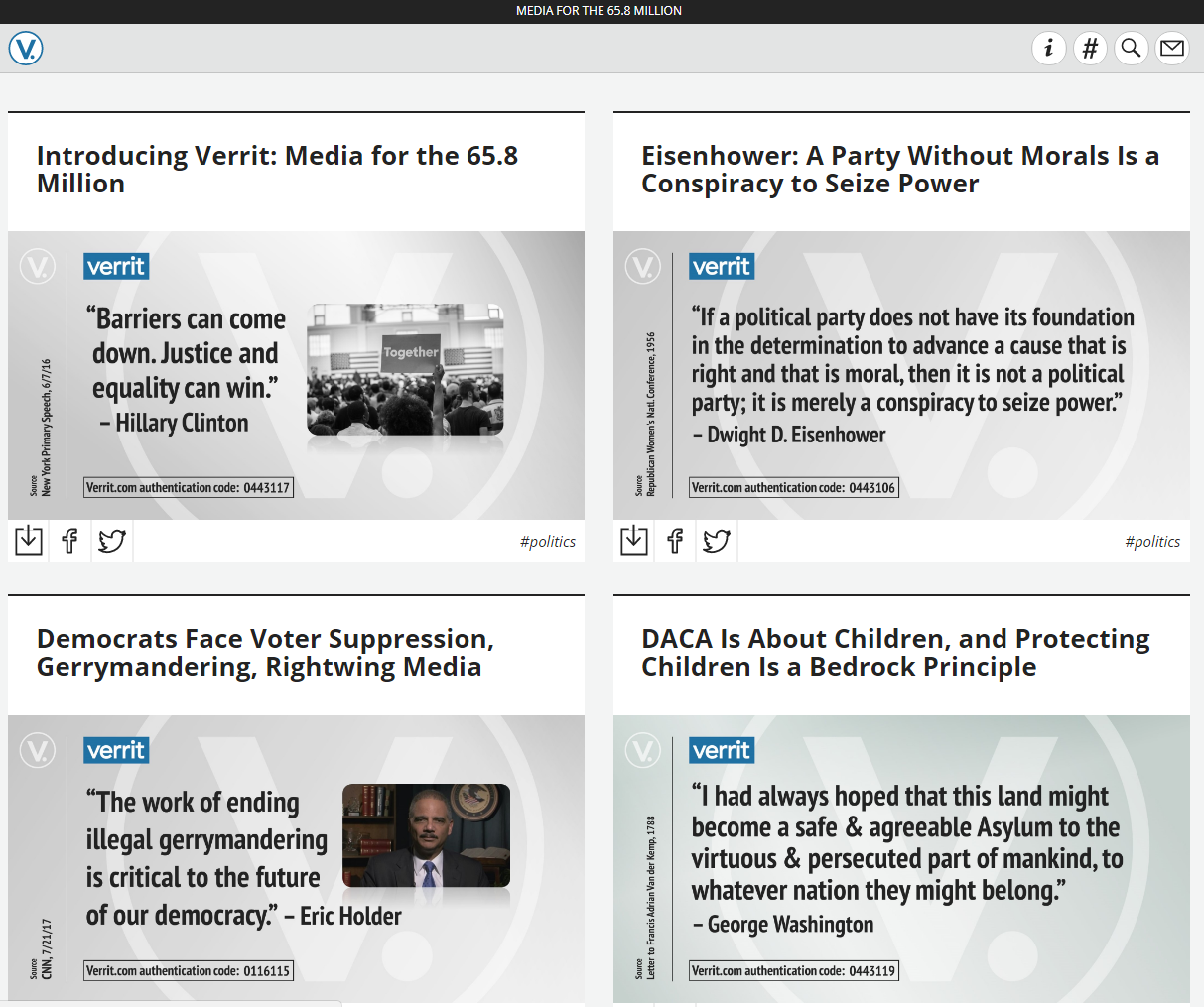 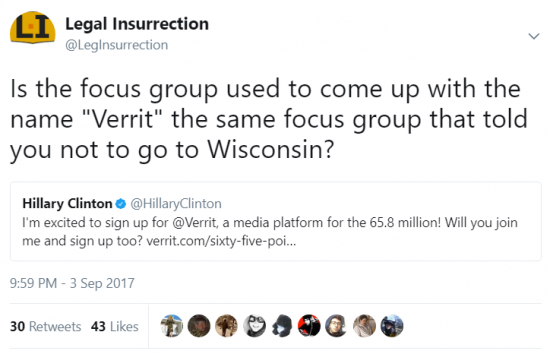 Who is behind Verrit? A die-hard Hillary booster, Peter Daou. Mediaite explains:

First off, the 65.8 million is a reference to how many votes Clinton received in the 2016 election.

Verrit was set up by Peter and Leela Daou. Peter Daou is a former Clinton adviser who has been incredibly vocal on Twitter since the election. After Clinton’s endorsement, Daou explained what Verrit is and who its audience is, saying that “Hillary Clinton’s voters… are unrepresented in the media” ….

Hillary supporters were unrepresented in the media? HILLARY SUPPORTERS WERE THE MEDIA:

The reaction to Verrit has been near universal mockery and derision. Twitchy and Mediaite collect the reaction.

Verrit seems like farce. Because tragedy already happened. The only thing that could make this better is if Hillary ran again.

“Hillary endorses online platform for her voters, because she won’t just go away.”

You can’t sell influence if you’ve got no influence to sell.

I think this is hilarious – Crooked Hillary as an arbiter of “the truth.” She wouldn’t know the truth if she fell over it in the street.

She is good at falling over in the street though.

Hillary, Hillary – how on earth can we miss you if you won’t GO AWAY?

Good lord, won’t someone just roll her into the corner and give her a bottle of gin?

Well at least she isn’t shilling some erectile dysfunction pills.

For her, it was elective dysfunction.

A recording of her voice and her picture are medically recognized as the treatment for priapism (“an erection lasting over four hours”). The anti-Viagra…

“That look… where boners go to die”

Peter Daou is a modern day Renfield – based on the “Dead and Loving It” template, of course.

Peter Daou is the kind of man who gives bootlickers a bad name.

So, the Democrats plan to sequester themselves.

They already have Democratic Underground for that.

Her behavior is becoming pathological! She seems to have reached a point in her life where there is no learning curve. She has flatlined and needs help.

Becoming pathological? She arrived there long ago.

I can guarantee the spineless GOP will be making this exact argument 6 months from now when they try to ram DACA Lite down our throats. Read Schlichter

Since when do we award children with the ill-gotten gains of their parents? If children brought into the country are granted amnesty, then more will follow. Just as if children of bank robbers were allowed to keep the stolen money, there would be more bank robberies.

You never mention the spineless Donald Ducks, who could have…and SHOULD have…ended DACA months ago.

Since it’s Hillary “Bring Your Checkbook” Clinton talking, it’s only wise to ask what this would cost me.

How can we tell when clinton final dies?

Doctors will put a hundred dollar bill next to her on the gurney she is covered on, and if the cash is still there in the morning, doctors can be certain hillary clinton is dead.

It is absolutely amazing this freak almost became the president of the United States – and on the heels of that other freak, obama. The bullet we dodged was a trillion caliber.

No, she didn’t. She’s done a lot of things, including serious felonies, but there is no truth to that story.

Yep, she sure did. She had the power to stop it in it’s tracks with bureaucratic red tape, but in choosing not to exercise that power she tacitly approved of the deal, allowing it to go through.

This, of course, was because the people involved in the deal had “scratched the back” of the Clinton Foundation to the tune of many millions for many years. To claim there was no direct, traceable, quid-pro-quo at the time of the transaction reveals a rank ignorance of how politics works, especially with corrupt scum like the Clintons.

Anyone who doubts the Sec State had the power to squash the deal should look at the way the State Dept stalled the XL Pipeline deal during Obama’s administration.

You don’t know what you’re talking about. She had no power whatsoever to delay by even a minute the purchase by a Russian company of shares in a Canadian company.

Not even 0bama could stop the purchase; all he could have done was tell the company that if it proceeded they’d have to sell their US mines. But that was his decision, not hers; she had nothing to do with it, she wasn’t even on the advisory committee that makes recommendations to the president on decisions such as this.

And no, throughout the period when this purchase was waiting on 0bama’s approval, there were no unusual donations to the Clinton Foundation from anyone associated with it. Even Ian Telfer gave less than his usual donation, not more.

Further, concern over who owns uranium mines in the USA is as silly as the concern in the mid-18th century about foreign investment in US canals. The same answer given to those concerns — the canals will remain exactly where they are no matter who owns them, and in the event of conflict we will be left with canals and they with worthless paper — applies here too. The US has the same control over the mines and their production no matter who owns them.

That transactions was a “covered transaction” under CFIUS. If you don’t think SecState could have scuttled that deal you’re delusional. And like I said previously, the Clintons play the long-game with their grifting.

Go put your “I’m with Her!” shirt on and run over to Verrit… they’re looking for people like you.

She can, of course, privately ask the president not to approve it, just as anyone with access to him can do; but he’d want to know why, and he wouldn’t agree without a good reason, and above all if one were trying that there are so many people closer to the president whom one would bribe instead of her.

Any bribe could not have happened before the transaction was pending, because nobody would have known there was anything to bribe her for. And it’s unlikely to have happened after it was over, because she’d have no reason to extend credit. Besides, if you consider all donations, ever, from anyone who had an interest in this transaction, to be bribes related to it then there’s no end to it, and anyone can be accused of this at any time. “President Trump approved this takeover? OMG, Mrs Smith, who has $100 worth of shares in the selling company, gave Ivanka a doll for her 5th birthday! Corruption! Bribery! Call the Enquirer!”

Riiiighhhhttt….. nobody could possibly bribe a Senator or Presidential Candidate or Secretary of State beforehand… how could they POSSIBLY know that the person would be able to scratch their back one day? How on earth?

How could the head of the State Department POSSIBLY tie something up in red tap ad naseum? HOW could it possibly happen? Lawd, I get the vapors just thinking about the difficulty of it!

For somebody so smart you sure are stupid sometimes.

Hoping that she’s “scratch their back one day” is not a bribe.

And no, there is no possible red tape she could have tied this up in. She literally had no connection to it. It wasn’t in her jurisdiction at all.

Besides, even if there some way she could have interfered, why would she need to be bribed not to? Why would it even occur to her to do so? And how can her failure to hold it up justify accusing her of having “helped Russia”? If I fail to rob someone, have I helped them?

The whole story is a fantasy from beginning to end. It has no foundation. She doesn’t need a defence, because there’s no reason to suspect her in the first place.

From its description, Verrit seems like a sort of fact-checker organization. But arbitrating the truth is the last job on Earth that I’d give to Hillary.

This will obviously become some weird quasi-cultlike bubble where Hillary can spout any bullshit she likes without consulting with reality.

If only they did things to actually address the issue, rather that to benefit themselves. They are so smart they haven’t figured out most people see right through the charade.

TheFineReport.com in reply to oldschooltwentysix. | September 5, 2017 at 2:56 am

It took long enough. Half the country still doesnt get it.

When is she being indicted??

To be blunt, shit like this is SCARY to me.

This is a terrible idea on every level because of only one reason – she lost.

Quite frankly, just like ‘fake news’, this feels to me like something that had been planned months before the election.

Where do I apply for my seven-digit authentication code for the Washington Post article containing this quote?

“I remember landing under sniper fire. There was supposed to be some kind of a greeting ceremony at the airport, but instead we just ran with our heads down to get into the vehicles to get to our base.”

Has this woman EVER looked excited?

Speculating here, but the choice of verbiage in the “verrit” name is interesting. She wants it to be like “reddit” except that the “information” shared will be “veritable” or “true”. IMO, foolish to set yourself up for failure by challenging reddit as a social media platform (according to wikipedia, the #4 US web site).

Farcical, indeed, that Hillary’s name could be associated with anything connected with true information!

Anyone signing up for “verrit” has to be a democrat bot, a troll or a seriously unstable person in need of a safe-space to believe Hillary’s fountain of impossible lies.

It seems to me that an echo chamber like Verrit will leave them blind in future elections, and when they lose they will be so disappointed they will again spend years pitching another juvenile hissy fit.

Well, that Eisenhower quote is an apt description of the Democratic Party.