Hillary Fancies Herself “Paula Revere” Warning the Russians are Coming

Hillary Fancies Herself “Paula Revere” Warning the Russians are Coming 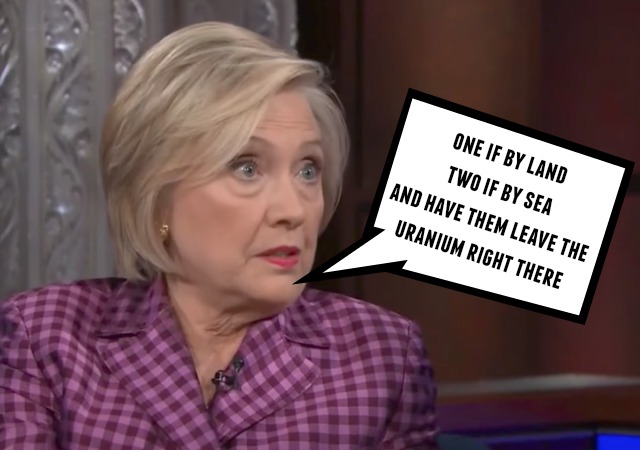 The longer she sticks around, the crazier she sounds.

Thursday night, Hillary joined Stephen Colbert’s late show, where she referred to herself (unironically, I might add), as “Paula Revere”, a heroine, warning us all of the Russian threat.

“I feel like I’m a bit of a, you know, Paula Revere. I’m trying to sound the alarm about this [Russian election interference],” Hillary said. “You’ve gotta understand what Putin’s strategy is — he really doesn’t like Democracy.”

Not that facts matter to the Clintons because while she might fancy herself akin to a revolutionary war hero of sorts made famous by a poem, the Clinton Foundation was wheeling and dealing, taking “donations” from a Russian bank in the form of $500,000 speaking fees along with an aggregate of $2.35 million in straight donations from Uranium One’s Chairman. This same bank was helping to broker the Uranium One deal. Remember that one? The deal struck while Hillary was Secretary of State that sold one-fifth of the U.S.’s uranium production to Russia? But by all means, lecture us on the evils of Putin’s agenda…

There was a very small post-election window when I genuinely felt sorry for Hillary. She spent her entire life wanting to be president and twice, she lost. Badly. That has to be embarrassing. But the woman doesn’t seem to understand exiting with grace. And in the words of Trump, that’s just sad!

“Clintons take $190,000 worth of china, flatware, rugs, televisions, sofas and other government property with them when they left the White House:
http://abcnews.go.com/Politics/story?id=121856

Paul Revere was a silversmith, engraver and early industrialist. On the other hand, hillary clinton is about as accomplished as barack obama.

Paul Revere was patriot. Hillary clinton is a traitor.

She’s more ‘benedict arnold,’ much like obama is, too.

“The Russians are coming”

Maybe so, but I’m more worried that the Democrats are here now.

Reading about Hillary used to make me sick. Now it makes me laugh.

Puzzle solved: hillary clinton has been banging her head against the wall since she entered into public life: she obviously has has advanced-stage CTE.

Democratic lawmaker Dawnna Dukes is accused of spending more $51,000 on an online psychic, and faces misdemeanor corruption charges for allegedly giving a taxpayer-funded raise to a legislative aide to cover gas money for driving her daughter to and from school, obstruction of justice and being impaired while performing legislative duties at the Capitol. Dukes was absent for roll call 65 percent of the time during the 2017 legislative regular session, and 36 percent of the time in the special session.
https://tinyurl.com/ycrsewak

Other than that, she’s qualified to be either Krazy Kamilla’s or Fauxchontas’s running mate in 2020.

You know the saying…you can lead a Russian to Uranium but you have to pay Hillary if you want to take it home!

It doesn’t matter how wacky it is.

It keeps her in the news.

She still believes she has a shot at the next nomination.

There was a very small post-election window when I genuinely felt sorry for Hillary.

No “Lamentations of de women” for you, huh?

Then there is the first-order forcing of Catastrophic Anthropogenic Planned Parenthood (CAPP) that is propagated with the establishment of the Pro-Choice Church (selective, unprincipled, and opportunistic) through denial of human evolution, intrinsic value of human life, and the twilight faith (i.e. conflation of logical domains) in a stork that delivers babies at a time of viability.

She’s more of a neo-Caesar.

She Chose. She conceived. She aborted.

With a male partner, Obama, of course.

Forget Hillary. What’s Willy Jeff up to these days?

notamemberofanyorganizedpolicital in reply to Anchovy. | September 23, 2017 at 2:00 pm

Remember the movie “The Producers”? A crooked producer finds a crooked accountant and “sells” 100 TIMES the profit of the show to different individuals. So if the show is a hit, people don’t get paid and they go to jail. So they try and make sure “the production” fails.

I think Hillary and company tried the same scam. They took THOUSANDS OF MILLIONS from BOTH SIDES of every situation. Sunni arabs and Shite arabs. Iran and Saudi Arabia. And if she had won the presidency, there is NO WAY she could make everyone happy.

So she lost ON PURPOSE! And as a going away present she is charging the faithful $400 for a “picture” with her and getting $20 million up front on a fake book.

“You’ve gotta understand what Putin’s strategy is — he really doesn’t like Democracy.”

Well that’s something Hill has in common with Vlad.

The pathetic state of liberal feminism. For decades they’ve been harping about electing a woman as president and this is the best they could come up with? The most corrupt politician in American history? A shrieking harridan, so deranged and entitled that she makes SoreLoserman look respectable. What an embarrassment.

How clever of Paul Revere to name his horse’s backside Paula.