“Americans are what those pictures are, selfless, color blind, inspiring.” 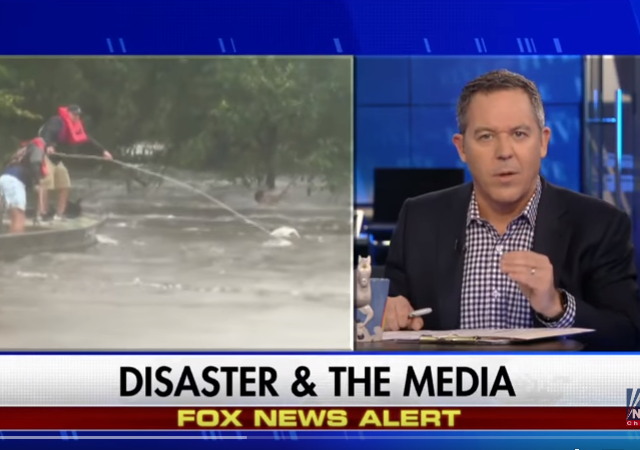 A few nights ago on The Five, Greg Gutfeld delivered a monologue that you really need to watch. Greg does an excellent job of reminding us that the real America isn’t the one we see portrayed in liberal media or on Twitter.

Real America is the one we have seen played out over the last week in Texas, where Americans of all kinds have come together to help each other in a time of need.

Gutfeld: Harvey Response Shows Americans ‘Aren’t What the Media Says We Are’

“So, you know else takes a hit when disaster strikes? Opinions slingers like me, who are sidelined as we become like you, witnesses to real news, not fake news, real news. When all you have are visuals of human misery and human spirit, who needs me? The only thing that matters is helping the helpless.

And as real news erupts, crud, like identity politics, MTV awards, Kathy Griffin, they return to where they belong, toys in the closet, suddenly outgrown and forgettable. Shallow minds can’t survive a flood, although some have tried. Slate, a blog, calls the heroism that we’ve seen a myth. Climate change apostles use crisis to mock skeptics. Academics joke about karma.

The media knocks Melania for her shoes, and knocks Mr. Trump for his lack of empathy. To that point, what did emotional expression get you in Katrina? Governor Blanco shed some tears while delaying National Guard troops for days. Mayor Nagin shouted emotionally on TV, but what about all of those buses left unused and then ruined by him? Or the Red Cross being delayed entry to New Orleans? Ultimately, Blanco went away. Nagin’s in jail. And President Bush won’t be remembered for turning the other cheek when both blamed him for their errors.

Now it’s too soon to judge Mr. Trump on this, but you know its coming. Just weeks ago the media used an evil act in Charlottesville to indite America. Now, Harvey arrives to repudiate that notion, writing a perspective that had been wronged for so long. We aren’t what the media says we are. Divided, hateful, evil, but the news has been telling us for years has been dispelled in just a few days.

There is no room for spin when you see those rescues with your very own eyes. Americans are what those pictures are, selfless, color blind, inspiring. The news may be bad. But for once it shows us who you are really in time of crisis, good.”

I’ve watched this a dozen times. Take a look:

As a country, we could use more reminders like this.

Our MSM purveyors of yellow journalism know how to manipulate people for “clicks and eyeballs”.

The class (e.g. race/color, sex) divisions are largely manufactured and progressed under political, corporate, and social institutions that are bitter and clinging to past glories in real and invented enterprises.

In reply to overwhelming evidence of societal and community cohesion, the left will simply say, “yeah, but it takes a national disaster to bring it about.. in a month you’ll all be lynching one another again.”

I wish to point out that the only people running lynch parties in the last century or so have been Democrats.

If you want to learn how Texas, and America, really operate, read this amazing story about the guy keeping as many H.E.B. grocery stores as possible open in Houston:

The media NEED the racist garbage. Texas is just getting it done without them.