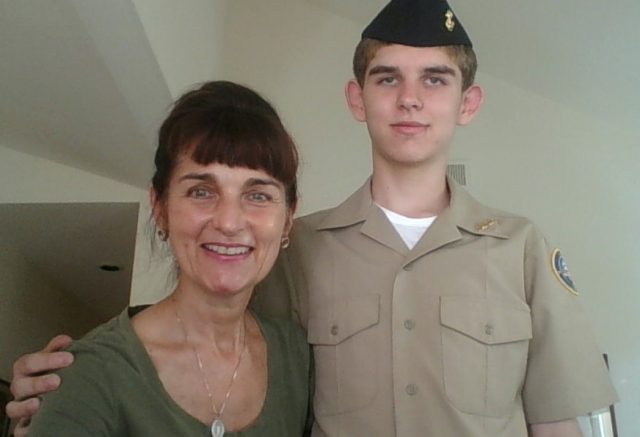 I am blessed to be able to send my son to a really superb institution: Junipero Serra High School, Home of the Conquistadors. Not only is the facility wonderfully counter-cultural, but the teachers I met during open house were outstanding.

I was truly impressed by his Junior Reserve Officers Training Corps (ROTC)/Navy instructors, who made a point of sharing with the parents the concepts they stress during class: Patriotism, leadership, and personal responsibility. The fact that President Donald Trump’s picture was prominently featured in the classroom was a delightful bonus.

During the open house, the instructors mentioned they were having a fundraiser. Though it is an annual fund-raiser, it seems extra monies are needed for their program this year, as the Navy had to divert funding to rebuild the Junior ROTC programs at schools in Florida and Texas that were devastated by the recent spate of hurricanes.

My son has really matured during the past few weeks, as he has participated in this program. I was hoping that Legal Insurrection readers could please help our Junior ROTC by donating AT THIS LINK. Any amount would be deeply appreciated by this cadet mother!

Here are the cadets themselves:

Some Legal Insurrection fans may want to directly assist their own school districts’ programs, or prefer to go “Army” or “Air Force”. I talked to Lt. Col. Chris Belcher, the US Army Cadet Command Public Affairs Officer, about how to do so.

“School districts establish and support individual Junior ROTC Programs. If someone wanted to donate to a school’s program, then they should contact the local school district to get the contact information. We appreciate the support.”

Those interested in learning more about the Junior ROTC programs or have additional contact details can find more information on these websites:

Though some Junior ROTC programs are in the process of rebuilding, others are helping out the victims of the hurricanes, such as the group from Coolidge, Arizona.

In the case of the Coolidge Junior ROTC program, that meant raising as much money for hurricane victims as possible.

On Saturday, the JROTC raised $300 for those affected by the hurricanes Harvey and Irma during a car wash held at the Coolidge Unified School District administration office.

“We like to go ahead and help any way we can,” said Cari Tolley, President of the MCJROTC Booster Inc. “We thought the best thing we could do was to raise some money to help those people.”

The funds will be donated to Habitat for Humanity, which plans on aiding in the rebuilding efforts.

Legal Insurrection covers so much insanity at American educational institutions, I am grateful for the opportunity so support our cadets and shine a light on their good works.

you’re sending your son to a school named after a genocidal racist? the horror!!!

is there a statue of him on campus? asking for a friend… 8)

I have bought all the school logo items I can!

The biggest thanks possible to all of you to Legal Insurrection readers who donate. Blake and I are very, very appreciative. The Serra High NJROTC program will be outstanding this year because of your donations.

Thank you so very much!