One has a possible eye injury. 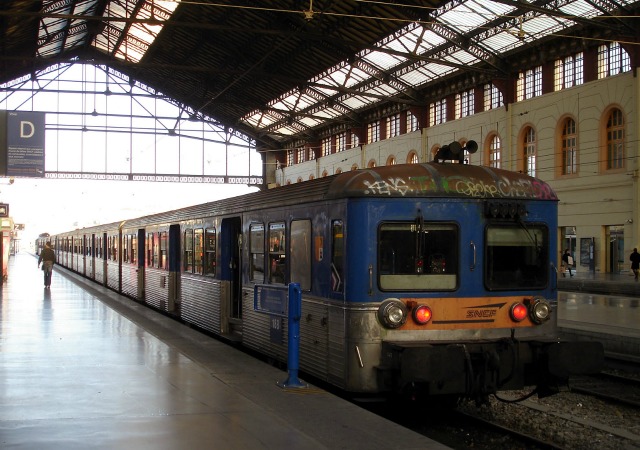 Two of the tourists were injured in the face in the attack in the city’s main Saint Charles train station and one of them has a possible eye injury, a spokeswoman for the Marseille prosecutor’s office told The Associated Press in a phone call.

She said all four of the women, who are in their 20s, have been hospitalized, two of them for shock.

The spokeswoman said the 41-year-old female suspect did not make any extremist threats or declarations during the attack. She said there were no obvious indications that the woman’s actions were terror-related, but added that officials could not be 100 percent sure about ruling out terror links at such an early stage of the investigation.

Marseille is located on France’s southern coast, about 490 miles from Paris.

Doctors treated one of the women for “partial loss of vision.”

France 24 reported that the attacker “justified her actions by saying she herself had been the victim of an acid attack when she was younger.” The police already knew the attacker for theft.

The AP detailed other attacks that have happened recently in Marseille:

In April, French police say they thwarted an imminent “terror attack” and arrested two suspected radicals in Marseille just days before the first round of France’s presidential election. Paris prosecutor Francois Molins told reporters the two suspects “were getting ready to carry out an imminent, violent action” on French territory.

In January 2016, a 15-year-old Turkish Kurd was arrested after attacking a Jewish teacher on a Marseille street. He told police he acted in the name of the Islamic State group.

*This is an ongoing story. We will update when more information comes out.

The victims have been identified. From NBC Los Angeles:

In a statement, Boston College said the victims were four students at the school who were in a study abroad program.

“The students were identified as BC juniors Courtney Siverling, Charlotte Kaufman, Michelle Krug, who are enrolled in Boston College’s Paris program, and junior Kesley Korsten, who is a student at the Copenhagen Business School in Denmark,” the school said in the statement.

It’s spreading. Last month (or so) we heard about acid attacks in England. Now France. Where next?

Gee, I wonder what the motive was, it’s so hard to decipher . Clearly she was not “white” because her face would be plastered all over the internet, I’m guessing she was a member of the religion of peace, but she’s mentally ill, so there’s that…excuses all deeds.

Tourism to Europe is about to drop dramatically. Where is the State Department warning about travel to nations where terrorists are carrying out attacks almost daily now?

Once we start warning Americans about terror attacks overseas, it admits that there are a) terrorists there, and b) eventually their identity will come out. Once that happens, over the objections of the State Department and the Left, it will become impossible for them to pretend that they should be kept out of our country. Thus, no warnings.

notamemberofanyorganizedpolicital in reply to Dave. | September 18, 2017 at 10:21 am

Tourism to Western Europe has already fallen off a cliff this past year.

A Mary Kay rep that snapped?

“The police already knew the attacker for theft…”

Boy, these French cops really can call it: kind of like closed circuit cameras protecting a subway station, instead of a cop: “Yup, we got it on tape.”

Europe is doomed. The US isn’t far behind, unless we take back our educational system and destroy the GOPe as well.

Acid attacks go way back in France. Read some of the classic crime literature. I seem to recall a Sherlock Holmes adventure where a villain used acid to disfigure a former lover. He was a Continental.

1) If it appears to be a possible terror attack, and no ethnicity or religion is mentioned, the perpetrator is likely Muslim.

1a) If it is shown that the perpetrator is Muslim, it is almost certain that the authorities had advance warning of some sort and deliberately failed to follow up in order not to be politically incorrect. This will not be criticized by the media.

3) If there is an act of political corruption discovered, and no mention of political party is made in the news reports, Democrats or their allies to the Left are involved.

4) If a White Male is involved in a crime or possible terror attack; pictures will be prominent and there will be wild conjecture as to his being a Nazi, a racist, or a drug dealer. Even if he worked for OFA or Occupy Wall Street.

5) The media regards the death or injury of anyone who is not an officially “protected class” as deserved and desirable and it will be deemed as being their own fault, especially if a “protected class” is involved in any way.

Pretty close. It reminds me of what former residents of the USSR told me about interpreting Pravda and Izvestia.

notamemberofanyorganizedpolicital in reply to Subotai Bahadur. | September 18, 2017 at 10:24 am

Get that list copyrighted, because it ought to be shared everywhere.