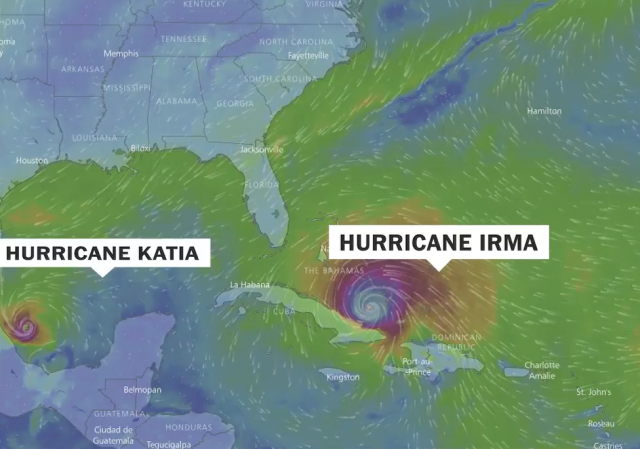 Down in Houston, we’re still dealing with the aftermath of Hurricane Harvey. And as bad as that storm was, Irma seems set on outdoing Harvey in every single aspect.

This monster storm has demolished everything in its path and it’s far from finished. Irma is headed straight for Florida like its intentionally trying to rid us of the sunshine state. Late Saturday, Irma is expected to make landfall on Florida’s southernmost peninsula. 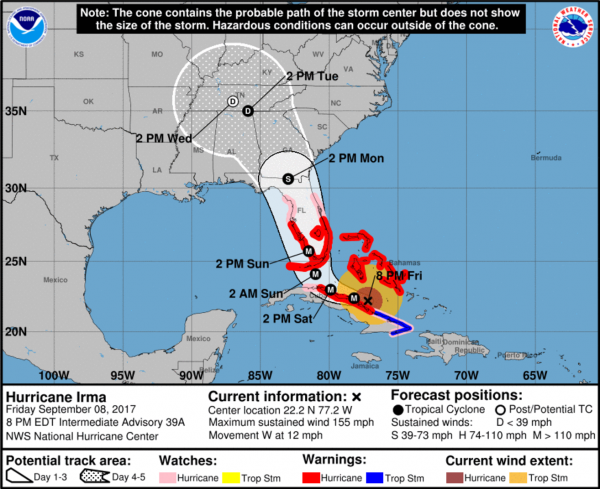 Now a category 4 storm, Irma has left parts of Cuba and the Caribbean in ruins. From the NYT:

Hurricane Irma pounded the Bahamas and the northern part of Cuba on Friday evening, before cycling toward Florida. It is expected to hit there late Saturday with wind speeds powerful enough to snap trees and power poles and tear the roofs off buildings. And Gov. Rick Scott said the lower half of Florida could face life threatening storm surge as early as Saturday morning.

Irma, a Category 4 storm, caused flooding in Cuba’s northeast on Friday and continued to move along the nation’s northern coastline, according to the National Hurricane Center.

In the Caribbean, where more that 20 people were killed, residents in Barbuda and St. Martin, islands that suffered excessive damage from Irma, wearily prepared for Hurricane José. The Category 4 storm that could hit those islands within the next two days.

In Florida, officials urged hundreds of thousands of people in the hurricane’s projected path to evacuate and to not underestimate the power of Irma. Governor Scott said it would be “way bigger than Andrew,” referring to the 1992 storm that was the most destructive hurricane to hit the state.

Everyone from Alabama to North Carolina is on alert and have been told to prepare for hurricane conditions. Florida’s Keys have been warned of “life-threatening inundation,” reports the NYT.

We’ve included a few livestreams that should have the latest on all things Irma. As more live sources become available, we’ll add them beneath as well.

Live feed from The Weather Channel:

And a live Irma tracker:

Florida is about to take what’s predicted to be one of the worst weather beatings we’ve witnessed. Watching Houston come together in the wake of Harvey gave me hope that our best days remain ahead, despite what media and politics suggest.

We pray fervently for everyone in Irma’s path. I’m sure if you’re like us, you have loved ones or know people who are potentially imperiled or maybe you’re hunkering down with ammo, tuna, and loads of bottled water. If that’s you, know you’re in our prayers. We pray for safety and grace to weather the storm.

Found on the Maggie’s Farm blog:

Interactive wind velocity and direction in the area (or across the globe) Very impressive.

My favorite site (I’m in Orlando).
Click on “earth” and experiment.
Time goes both backward and forward.
Click anywhere to find wind speed and direction at that point.
Click on units to change (e.g. from km/hr to mph).
Updates every 3 hours.

Daughter got out of Georgetown FL Wed. Just west of Daytona. Beat the rush.

Niece and babies bailed out of Charleston SC today.

All safe and sound here in the cornfields of Hoosierland now.

I hope and pray it is not as bad as predicted.

“Irma seems set on outdoing Harvey in every single aspect.” No way.

One reason I read Legal Insurrection because it does not follow the mass-media over-hype.

Rainfall is a major “aspect”. Harvey had 40-50 inches of rain in places. Irma is expected to drop 10 inches or less.

The historic flooding in Houston and other parts of Texas should not be forgotten a week later – that sounds like the history “experts” on CNN, et al.

Irma coverage, as with the coverage of Harvey is train wreck journalism. The media is like people standing on a hill watching two trains about to collide. They are fascinated with the idea of disaster and death.

Harvey was a mess. And it played out over several days. But, the media had little or no interest in Harvey, outside of Houston. And, now that there is little chance of anyone else dying there, the media has moved on. Irma is a powerful, dangerous storm. It will play out over a few hours. And, the media will move on by the end of the week.

These weather incidents are all hyped by the media to gain viewership, and in some cases readership.

I will finish dropping my hurricane awnings over the impact resistant hurricane windows of my 90 year old flat-roofed CBS house, when the winds come up. We have plenty of food, water, a gas grill and a generator for after the storm passes. We have battery operated lights, TVs, radios and phones. The vehicles are under cover. So, there is nothing left to do but sit down, relax and wait. Being on a rather high ridge [for Florida], flooding has never been a problem.

Could something disastrous still happen to me? Sure. But, that is life. All those people who drove from the SE Florida area to the SW Florida area didn’t do themselves any favors. If the point of terrifying people into leaving SE Florida was to escape the storm, then the media screwed the pooch this time.

Pardon the typo. That should read 60 year old house.