The disease claims a 17th life as the CDC plans to come assess the city’s response. 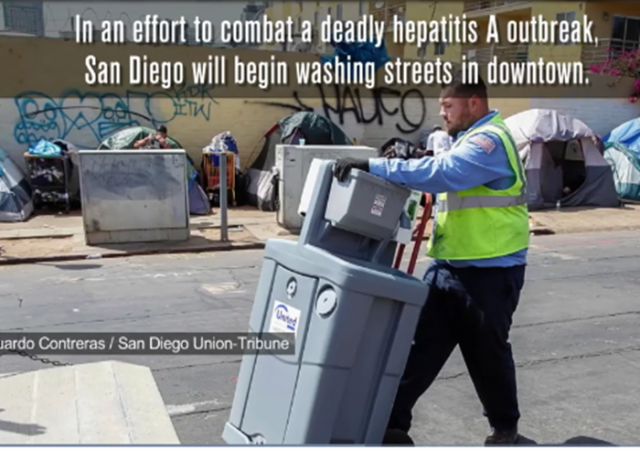 It seems the only law California follows is the one related to unintended consequences. In addition to voting overwhelmingly for Hillary Clinton, our state also approved a ban of single-use plastic bags being offered by stores to contain purchased items.

This move may have been one of the factors that has contributed to San Diego’s Hepatitis A outbreak. The virus is spread via human feces in San Diego, as those bags were a readily available sanitation article for the homeless.

“The reason the outbreak has spread so rapidly is because homeless are living in more concentrated areas,” said Dr. Jeffrey Norris, the St. Vincent De Paul medical director who has been managing the charity’s response to the public health threat. “They often have to defecate in their tent, or next to their tent, and that exposes their neighbors on the street. Hygiene becomes incredibly difficulty.”

San Diego banned plastic grocery bags last year, taking away a manageable alternative to defecating outside a bathroom. County health workers are now handing out thousands of “hygiene kits” that include plastic bags.

The disease has claimed another life this week, and The Centers for Disease Control and Prevention (CDC) will be in San Diego next week to assess the response to the outbreak.

Seventeen people have died and 461 cases have been confirmed, according to county officials. Of those cases, there have been 315 hospitalizations.

A third of the cases involved people who used illicit drugs and are considered homeless. Of the cases, 25 percent are neither homeless or drug users.

A few miles north of San Diego, Orange County officials are scrambling to determine how the second case in their region occurred. The CDC performed genetic testing of the person’s virus, which was found to match the strain seen in San Diego, but the unidentified individual was not homeless and not known to have visited America’s Finest City.

Meanwhile, some San Diego residents are on-edge when they use our public transportation.

Waiting in line to catch the San Diego Trolley on C Street on Friday afternoon, Wanda Hermes said she can’t help but think about the city’s ongoing hepatitis A outbreak in those moments when she’s touching the rails, seats and other surfaces that she encounters in the course of commuting to work in the morning and home at the end of the day.

…“It makes you think, maybe, you need to pay a little more attention more than you used to,” said Hermes, a city worker from La Mesa. “The people that are dirty, filthy, I don’t necessarily want to sit next to them.”

I was a guest on Canto Talk today, along with American Conservative Warrior Princess Teri O’Brien. We talked about California, the NFL, and Teri’s upcoming “Dangerous Minds” podcast program! Check it out…listening to us is infectious!

Well, it’s California, so of course they’ll try to pin it all on hardware, rather than on the people who are doing the actual spreading of their diseases.

Even so, it’s not obvious that putting their diseases in plastic bags would solve the problem. The disease bags still have to go somewhere, and you can’t just dump the stuff into the sewer system while it’s still in plastic bags. So, it has to go into the bags, then be transported, then be dumped out of the bags … and the whole thing is just not going to fly. And especially not in California.

Tom swift: you’re missing the point. If the bag been in use, there wouldn’t have been the outbreak and the number of infected bags would have been negligible.

For hardcore environmentalists, this epidemic is win/win: the ban reduces a physical hazard to the environment, and the consequence will be to reduce the number of toxic humans contaminating the planetary ecosystem.

For the rest of us who are sane, though, it’s lose/lose:
we have a public health menace on our hands and have had a convenient receptacle for waste turned into contraband.

That ban on plastic bags went into effect a year or three before we finally got the hell out of California (where I was born, so it was emotional for me as well as practical). People were starting to leave more and more dog poop around the property (a 90-acre sprawling development up against the mountains in West San Fernando Valley) after this happened.

A friend who goes to San Diego to escape the Phoenix-area heat every August came back and said it was dirty and awful and she won’t go back to San Diego.

Liberals literally destroy everything they touch!!

It gives old meaning to a new question, “Does a bum shit in the woods?”

Waiting for the earthquake and California sliding into the Pacific…Would we really lose much?

Just Leslie and a handful of others. I suggest they leave before the tsunami of disease takes over.

Why distribute kits when the city could deploy portable toilets? Oh, and this time lets not ‘privatize’ the crap work to ‘greedy’ outside
contractors- make city employees suck every last liter of poo from those compost honeypots.

I do hope the city uses organic cleansers, lets not forget about the enviroment.

As far as I’m concerned, the only ‘single use bags’ from the grocery store are the ones I’d have to buy to replace the free bags from the checkout line. I don’t throw them away until their are filled with used cat litter and similar.

California allows single use plastic bags for doggy poo, too. Our fine and freaky city provides plastic doggy bags gratis to freeloader dog owners walking their dogs in our city public park. They can’t be bothered to buy their own darn poo bags?

Simple example: Our bus stops have two small trash receptacles mounted on the frames of the bus shelters – tramps use the shelters to smoke, drink, eat, sleep, outhouse and shopping cart park. Trash everwhere. Trash everwhere but in the bins.

“It seems the only law California follows is the one related to unintended consequences.”

What a great statement! It sums up in a single sentence all the nuttiness that has been emanating from the Golden State, the only place even loonier than Seattle.

Travis Bickle: “All the animals come out at night – whores, skunk pussies, buggers, queens, fairies, dopers, junkies, sick, venal. Someday a real rain will come and wash all this scum off the streets.”