Chris Cuomo: If Dreamers become CNN hosts, will be “used like a Piñata” by Republicans

Chris Cuomo: If Dreamers become CNN hosts, will be “used like a Piñata” by Republicans

If a Fox News host had used that metaphor about Dreamers, heads would explode. 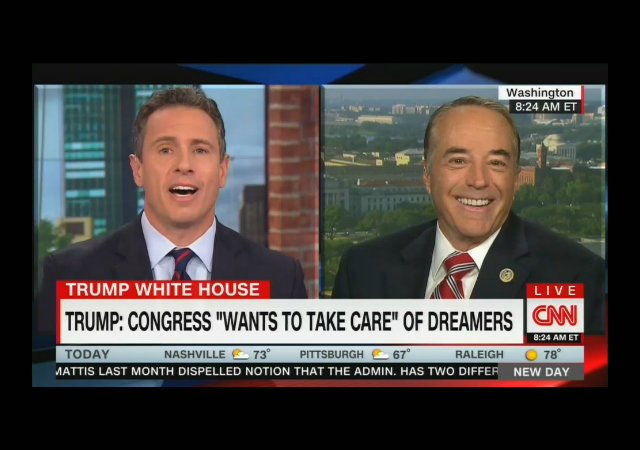 On CNN this morning, when Republican congressman Chris Collins light-heartedly suggested that Dreamers should be free to pursue whatever career they like, including “CNN host,” Chris Cuomo responded:

“That’s a low bar, Congressman. You should have higher hopes for people than to get into the media, be used as a piñata for guys like you all the time.”

Wait a second: Dreamers who become CNN hosts would be treated like a “piñata?” Stereotyping? Cultural appropriation? God forbid a Fox News host had used that metaphor. We’ll have to see what the PC police have to say about that!

Note: given their pro-amnesty politics, some of us were wondering if illegal immigrants were already serving as CNN hosts.

Note segundo: Even in such a lighthearted exchange, Cuomo found it necessary to complain of mistreatment. Poor Chris: only takes down a reported $2.5 million a year.

CHRIS COLLINS: We’ve got to have a pathway to legal work status for the adults as well as the Dreamers. And if the dreamers end in citizenship, again, I don’t have a problem with it. These are kids living just like our, going to school with our kids, looking forward to living the American dream, whether they’re going to be a teacher, an engineer, or whatever profession, maybe a CNN host, that they choose to do.

CHRIS CUOMO: That’s a low bar, Congressman. You should have higher hopes for people than to get into the media, be used as a piñata for guys like you all the time.

notamemberofanyorganizedpolicital in reply to mailman. | September 7, 2017 at 10:54 am

notamemberofanyorganizedpolicital | September 7, 2017 at 11:00 am

FYI – If you are not aware of this already, be sure to check it out.
Well worth your time reading and viewing.

“You Know Virtue Signaling Corporations are Losing When…
Posted on September 6, 2017 by sundance

Corporate moonbats also try to hide their defeat, particularly those idiots who cut off half of their customer base to virtue-signal to their preferred moonbat audience.

However, the market bottom-line is the overriding ‘end’ when the moonbattery ‘means’, bite them in the assets…..Not only did the marketing team need to target an audience the Moonbats abhor, Fox News, they also paid the highest ad rates to run on the #1 prime-time Fox show.

No Schemers, I mean Dreamers, should be allowed to have any benefits until they get fresh jumper cables for their parents pickup (the parents who illegally got them into this) and truck Ma and Pa back to Mexico.

The image does have a certain appeal. But it’s unrealistic. I suspect the public consensus is that nobody should be assaulted or injured; they should just be sent back home, whether home is Mexico or someplace like it.

What “the public” thinks is irrelevant.

Donald Ducks has already sealed the deal. He’s all in on DREAMERS.

Does the feckless GOP have a plan to fight back against this ridiculous double-standard or are they just gonna sit there and take it like they do everything else? Oh I forgot…these are the guys who can’t even answer a straight question about abortion without making themselves look stupid and slinking into a corner. Useless.

I hear all sorts of reasons for the “Dreamers” to stay in the US. Most every one skips over the part where their parents entered the US by breaking our laws.

“I want to” is not a good enough reason to break laws.

Why doesn’t Chris Collins just admit the truth and join the Democrat party?

Wow, Democrats are openly and pridefully embracing color diversity (i.e. racism) and selective (i.e. Pro-Choice, political congruence (“=”)) rule-of-law. This is a progression from Obama’s trail of tears from Tripoli to Kiev that left people behind under an emotional veil of deception.

I wonder if the Republicans will place principles before principals (i.e. domestic and foreign special and peculiar interests).

Chris Cuomo: If Dreamers become CNN hosts, will be “used like a Piñata”

notamemberofanyorganizedpolicital in reply to n.n. | September 7, 2017 at 4:38 pm

How dare he appropriate their culture!