Crews continuing to respond to a series of container ruptures and fires after Hurricane Harvey floods refrigeration equipment. 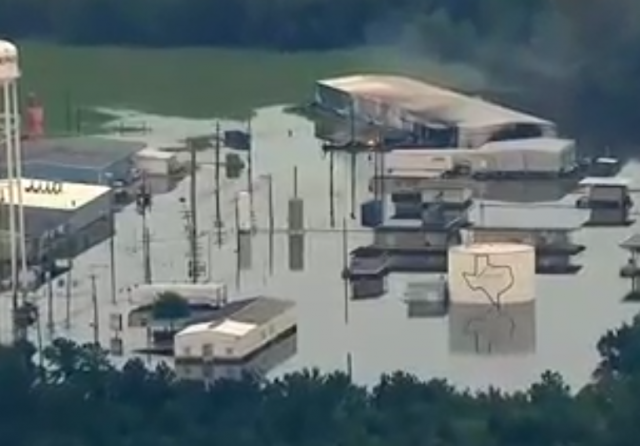 The Houston area is filled with heavy industry, including numerous chemical manufacturing and processing plants.

In the wake of flooding from the rains of Hurricane Harvey, one of the plants in Crosby (about 25 miles from the city) burned when trailers holding highly unstable chemicals used in the production of plastics and paint exploded, burning the flood-damaged plant.

While initial fire was quenched, the containers are continuing to rupture and ignite, and responders have had to fight a series of release incidents at this facility.

Thick black smoke and towering orange flames shot up Friday after two trailers of highly unstable compounds blew up at a flooded Houston-area chemical plant, the second fire there in two days.

Arkema says Harvey’s floodwaters engulfed its backup generators at the plant in Crosby and knocked out the refrigeration necessary to keep the organic peroxides, used in such products as plastics and paints, from degrading and catching fire. Arkema executive Richard Rennard said two containers caught fire Friday evening, and that there are six more it expects will eventually catch fire.

The fires occur when the compounds hit their decomposition temperature, generating enough heat to ignite. The black smoke are the combustion products of organic peroxides (carbon dioxide, water, and assorted carbon-containing compounds).

The typical response to a release of organic peroxides that have ignited is to contain and control the fire, allowing the chemical to be consumed while protecting the area, the environment, and the people in the surrounding community. After an aircraft was sent to test the atmosphere surrounding the Arkema Inc. plant, the Environmental Protection Agency reported that the data collected showed there were “no concentrations of concern for toxic materials reported at this time.”

“As agreed with public officials, the best course of action is to let the fire burn itself out,” France-based Arkema Group, one of the world’s largest chemical companies, said in a statement earlier Thursday.

Joseph Merola, an inorganic chemistry professor at Virginia Tech, said if the chemicals are able to burn out, they shouldn’t post any threat, although those close enough to it might feel an irritation in their eyes and throat.

The chemicals “don’t have a very long lifetime once they get in the air,” Merola said.

It appears as if responders are preparing for more fires that may be even larger, as it anticipated that the remaining containers will combust in the next 24 hours.

So far, three of the nine containers at the facility have exploded into flames, sending dark, black smoke into the air. The containers have about 500,000 pounds of materials inside, that without proper refrigeration, have become unstable.

Six remaining chemical containers at a flooded Crosby plant could explode at any moment.

At least 18 people have been injured since the first fire earlier in the week. One of the injured complained of a burning sensation in the eyes and throat and was still feeling the effects, days later.

Hopefully, this will be the Houston area facility that experiences chemical release emergencies associated with Hurricane Harvey. My prayers continue for a speedy recovery, and I am sending positive vibes that Irma does not follow in Harvey’s wake.

Not nearly as dangerous as this:

Where has de vos disappeared to? Same bunker as sessions and mconnell?

Same problem as in Houston, as in New Orleans, as in Japan: flood plain vulnerability.

I worked at this plant as a Senior Maintenance Engineer from 1993 to 2000. The buildings and emergency generators are elevated roughly four feet from ground level. Normally, that would be enough. However, this flood was a 1000 year event and the water level was about six feet about ground level.