Wake us when it’s over 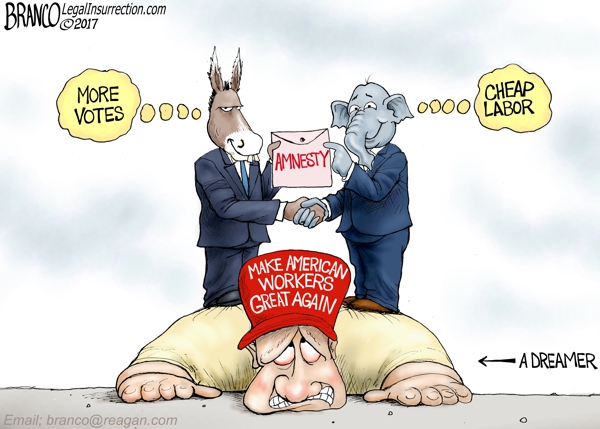 Wow! You hit the nail on the head with that one, Mr. Branco!

You should have T-rump in the lead role.

are you allowed out without a keeper ???
i hope not, especially if you drive ….

You need to catch up on the haps, dude. You’re the one who needs a keeper.

Donald Ducks has come out for legalizing the DREAMERS.

Just so we’re clear, down-thumbing me is denying objective fact.

Perhaps they’re voting on some other aspect of your LI persona – likability, gets along with others, respect for differing opinions, etc.

Oh. OK. So you think they’re Collectivist snowflakes who cannot abide the facts.

Does the GOPe really see illegal immigrants as cheap labour?

I think they are more along the lines of being spineless wimps because they don’t want to be unpopular or do things that cause a stink with the left.

IMHO, not just cheap labor directly. Large numbers of Illegals, willing to work for less, also contributes to lower wages for all workers.

DREAMERS are NOT “cheap labor”. One of the controversies around them is that they have a right to work here, granted under the DACA monstrosity.

Having worked in the trades and oil field most of my life, you won’t find illegals working for anything below the minimum wage, and often above it.

Probably a bit of both.

There’s nothing to support that they work cheaply.

Probably more true of Democrats since they keep using the cost to the local economy as a reason not to enforce immigration laws.

I think you would have been better off using a Jellyfish, given they are spineless like the GOPe.

“Kansas Secretary of State Kris Kobach on Wednesday defended President Trump’s decision to end a key Obama-era immigration program, saying that families of immigrants brought to the U.S. illegally as children should be deported.

“They came in presumably with a parent or parents, and so the correct policy is for us to enforce federal law and deport the whole family to the home country,” Kobach said during an appearance on CNN.

Kobach, who serves as co-chairman of Trump’s voter fraud commission and has been a fierce critic of illegal immigration, blasted the Deferred Action for Childhood Arrivals (DACA) program that Trump said Tuesday he would end.”
—TheHill

Apparently, Kobach did not read the POTUS-tweet.

New day, binky. Donald Ducks is all in for DREAMERS.

I wonder if Kobach will resign now.