Sadly, his home was reportedly destroyed by Irma’s fury 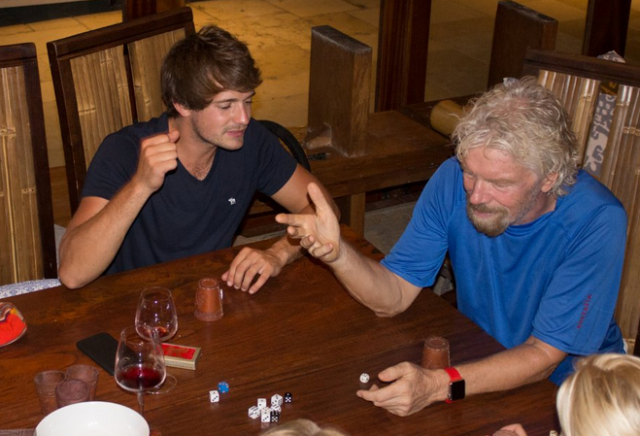 The last time Virgin Group billionaire Sir Richard Branson was featured in the news, he was bromancing Barack Obama during the former president’s Caribbean holiday after leaving office.

Now, he is entertaining an entirely different (but arguably as destructive) visitor: Hurricane Irma.

Sir Richard Branson, the billionaire founder of the Virgin Group, said he had no plans to evacuate his home in the British Virgin Islands, which lies directly in the path of Hurricane Irma.

Instead, Branson said he would hunker down with his team on Necker, his private Caribbean island, “as I have been on the three times we have had hurricanes over the past 30 years.”

“On Necker Island we have constructed really strong buildings (with hurricane blinds) that should be able to handle extreme weather pretty well, though with a Category 5 hurricane almost nothing can withstand it,” Branson wrote in a blog post, which also implied there would be no guests at his island’s private resort when the hurricane hits. “We had some lovely guests staying on Necker Island who have cut their trip short for safety reasons, and another group of guests have also postponed.”

Just experienced a night of howling wind and rain as Hurricane #Irma edges ever closer – everyone calm & upbeat https://t.co/tF84SPx7aB pic.twitter.com/lbM0bdHxCv

As a safety professional, I had to say I like his emergency response supplies:

Expecting full force of Hurricane #Irma in about 4 hours, we’ll retreat to a concrete wine cellar under the house https://t.co/tF84SPx7aB pic.twitter.com/wMUDoX3O4v

I encourage Branson to read my piece of the climate change fallacies associated with Harvey…which we can discuss together over a fine white vintage one day.

From #Harvey to #Irma, I think man-made climate change is a key factor in the intensity of hurricanes https://t.co/JxlBC3GRW5 pic.twitter.com/2oAsUGEB3i

Unfortunately, Branson’s Necker Island home experienced heavy damage, as has much of the region that has been hit by the Category 5 hurricane.

And as of 1pm local time, his home on Necker Island was in directly in the eye of Hurricane Irma and the storm continued to batter the area for several hours.

His son Sam Branson took to Instagram to tell his followers that his father and his staff were safe.

Unlike liberal haters, we at Legal Insurrection take no joy in the destruction of anyone’s home and property. We will pray that the Bransons and all others impacted by Irma continue to stay safe and recover quickly as possible.

I do not begrudge him his good fortune and a fine glass of wine.

and a glass of fine wine, too.

What about his bad glass of obama?

Is that a stock image of Branson boozing it up and playing liar’s dice or is that something they recently posted to instagram? No matter, they both look blotto.

“Unlike liberal haters, we at Legal Insurrection take no joy in the destruction of anyone’s home and property.”

I live outside the US, and while I certainly take no “joy” in the destruction of Branson’s home, neither do I take any joy in the destruction of poor rural people here by multinational interests whose proxies drive those people from the land by terrorism and murder, in order that elites like Branson might obtain the resources for luxuries like space tourism. There’s a dark side to the glittering future that Branson and his ilk dangle in front of our First-World noses, and it’s part of my daily reality.

Where is ‘here?’ Moscow?

Moonmouth is likely in Havana, taking care of business.

Isn’t this Dick Branson the multi-millionaire who STIFFED the U.S. Taxpayers several million dollars for us rescuing him from his FAILED hot-air balloon flight of fancy?

Yes, I believe he is the dead-beat, non-bill paying Globalist….

You forgot to provide an address where we can send donations to help this guy out.

Yes, Branson does enjoy showboating, which is all well and fine … and if one is determined to be useless in a high-profile sort of way, I suppose this is a good way to do it.

Except that the problem with whooping it up on a nice low beachy island during a hurricane is that the whole thing can end up underwater for a while. Now of course in popular mythology Obama can make the seas recede, and Trump can end an eclipse just by squinting at it without glasses … but how long can Branson hold his breath?

poor billionaire….
perhaps he’ll rebuild small & use the rest to assist those who didn’t have the luxury of a wine cellar bunker… don’t hold your breath…

as for the climate change ruse, maybe he should have had a dramatic reading of al gore’s latest flop while hunkering down in the booze bin… lots of hot air!

Perhaps St. Obama can return to Branson’s island to help re-build it, in the name of “income inequality.”

Just musing – can you imagine spending a weekend with Branson and Obama, stuck on an island? Me, either.

I’d rather be eaten alive by piranhas…

Is it like a game of Clue? Yes, yes I can imagine it.

The house was probably insured by American taxpayers through some program or another.

We just moved to the Tampa area, and I wasn’t nervous until the latest round of models came out saying the brunt of the storm is going to go straight up the state. To me, Branson and his antics are celebrity showboating. A “Look at me, I’m rich, so I can hunker down and take it” kind of action. At the end of the day, he’ll have a private jet fly him back to Europe and let the peons deal with the cleanup and rebuild of his island.

Hard to believe that someone with his resources and enough cleverness to operate a financial empire would be foolish enough to choose to remain in the path of a Cat. 5 hurricane. Arrogance?