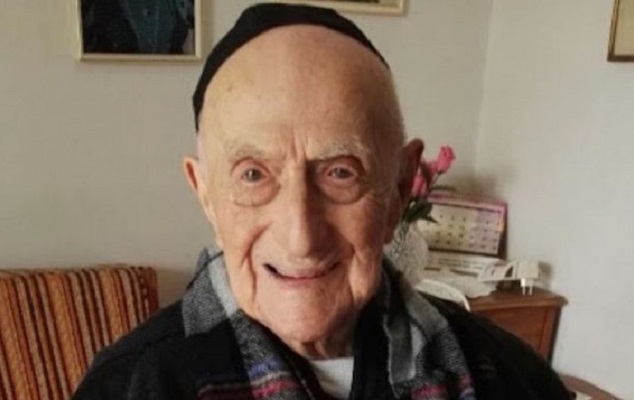 Born in Poland in 1903, Yisrael Kristal was verified by the Guinness Book of World Records as the world’s oldest man.  He had endured Auschwitz and the loss of his first wife and two children to Hitler’s death camps.  He died one month shy of his 114th birthday, may he rest in peace.

Kristal moved to Israel with his second wife in 1950.  Last year,  at the age of 113, he celebrated, at long last, his bar mitzvah.

The world’s oldest living man, Yisrael Kristal, died on Friday one month before his 114th birthday.

In 2016 Kristal, born September 15, 1903, had been recognized by Guinness World Records as the world’s oldest man.

Kristal, who lived in Haifa, had lived through both World Wars and survived the Auschwitz concentration camp.

Last year he finally celebrated his bar mitzvah — a hundred years later than usual. He had missed the original date because of World War I.

Kristal was born to an Orthodox Jewish family near the town of Zarnow in Poland. He was orphaned shortly after World War I and moved to Lodz to work in the family confectionary business in 1920. During the Nazi occupation of Poland he was confined to the ghetto there and later sent to Auschwitz and other concentration camps. His first wife and two children were killed in the Holocaust.

Kristal survived World War II weighing only 37 kilograms (about 81 pounds) — the only survivor of his large family. He married another Holocaust survivor and moved with her to Israel in 1950 where he built a new family and a successful confectionary business.

A devout Jew, he had wrapped phylacteries daily for the past century.

World's oldest man – Polish-born #YisraelKristal – the only member of his immediate family to survive the Holocaust, passes away at 113 pic.twitter.com/2JljQWik7t

World War I intervened, and Kristal was unable to celebrate his bar mitzvah.  This was rectified last year, as the Times of Israel noted at that time:

Born in Poland in 1903, Kristal missed his bar mitzvah — the Jewish coming-of-age ceremony celebrated when a boy turns 13 — because of World War I.

His daughter, Shulamith Kuperstoch, said his children, grandchildren and nearly 30 great-grandchildren gathered over the weekend to mark the occasion. She said he was very pleased as he recited the traditional Jewish prayer of gratitude while draped in a prayer shawl and surrounded by loved ones.

“Everyone sang and danced around him. He was very happy,” she told The Associated Press. “It was always his dream to have a bar mitzvah and he really appreciated the moment.”

H/t to an LI reader.