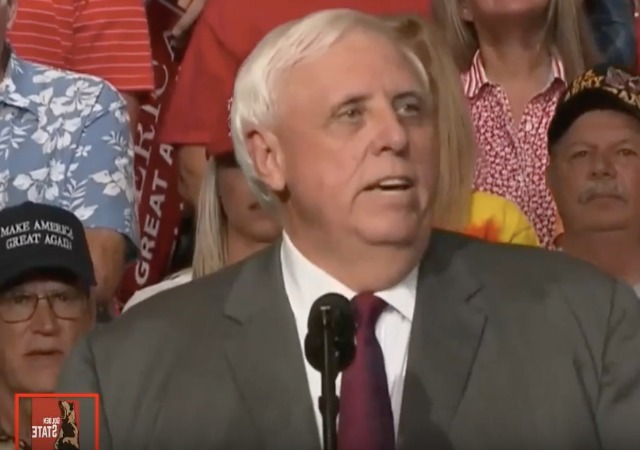 At a rally for President Donald Trump, West Virginia Governor Governor Jim Justice announced he will switch from the Democrat party to the Republican Party. From KGOU:

“Today I will tell you with lots of prayers and lots of thinking, I’ll tell you West Virginians, I can’t help you any more being a Democrat governor,” Justice said.

“The Democrats walked away from me,” the governor argued, and reflected that his late mother, who was a big fan of former President Ronald Reagan, was looking down on him thinking, “Jimmy, it’s about damn time you came to your senses.”

Justice won in November after he ran as a conservative Democrat. Justice has received comparisons to Trump before since he “is a billionaire coal and and real estate businessman.” From The Washington Examiner:

“I can tell you, this man and myself are not politicians,” Justice said, after being introduced on stage by Trump at the rally in Huntington, W.V. “We ran to get something done. We ran and gave up a part of our lives. We ran because we want nothing.”

He did not endorse Hillary Clinton for president. Justice has also “identified as a Republican and an independent in the past.”

During the rally, Justice also declared his support for Trump. KGOU continued:

On Thursday, Justice enthusiastically threw his support behind the president, saying he had already visited him at the Oval Office to talk about coal and manufacturing jobs. He praised Trump’s children, noting he’s gone hunting with his sons, and said, like him, the president isn’t a politician.

The Republican National Committee released a statement that pointed out Justice’s departure is another defeat for the Democrats:

“Governor Justice’s party switch is another blow to a Democratic Party that would rather obstruct than work to make our country great again,” said RNC Chairwoman Ronna Romney McDaniel. “Across America, voters have put their faith in the Republican Party because we are the Party fighting to give every individual the opportunity to achieve the American Dream.”

“With only 15 governorships and control of the fewest state legislatures in history, Governor Justice’s announcement is just the latest rejection of a party that is leaderless from top to bottom and unable to find a positive, unifying message,” the statement continued. “While Democrats continue to put politics before the American people, Republicans are working with President Trump to lead America towards a future with fewer burdensome regulations, greater economic stability, and stronger national security. Governor Justice, welcome back to the Republican Party.”

However, the West Virginia GOP wing is not as happy as the RNC:

“The ethical problems of this administration will soon become obvious,” the state GOP said in a press release just a few weeks ago. In February, they called Justice a “deadbeat” for still owing $4.4 million in back taxes.

“Justice wants to raise taxes, raise tolls, and put new tolls on every road he can while he is Governor,” Lucas, the West Virginia GOP chairman, wrote in a late-July post responding to a state tour Justice was about to embark on. “It’s our job to make sure he can’t do anything else to damage this state until we can get a conservative into the Governor’s Mansion where he refuses to live.”

Now that Justice is a Republican, the party has 34 governors in the country, the most since it had in 1922. It also means the GOP has “complete control of state governments in 26 states.”

“For what does it profit a man to gain the world but lose his soul?”

I don’t want Jim Justice in the Republican party. IMO, he is an undisciplined spender, tax-hiking, corrupt, publicity seeking grifter who doesn’t pay his own taxes.

Jim Justice isn’t even a James Webb, a moderate Democrat for whom the party has moved too far to his left to be viable.

He is someone who fully embraces the slime of Democratic politics, and switches parties only because the state has rejected his party and platform. The only good that will come from this is seeing the critical drubbing the press will give him on ethics, etc., now that he is an ‘R’.

The only thing Jim Justice will stand for is his own re-election.

Being the party of 34 out of 50 governors and 68 out of 98 state legislatures means having a big tent that includes “Republicans” who can get elected in states like Massachusetts and Vermont.

It’s still much. much better than being the party with 16 out of 50 governors, even if all of their 16 governors are true blue dyed-in-the-wool liberals without a single disagreeable position.

Welcome to the Grand Old Party, Jim Justice. (At least until the 2020 primary…)

Do they need 35 govan’s for that state convention thingy?

That needs 2/3 of the state legislatures, which is 34.

34 governors, 26 total control. I don’t know the number of split states, or more appropriately, how the others are split (D leg/R gov vs R leg/D gov).

And I don’t know if gov has to sign the call for the convention or not, or how that call is technically.

I do, however, guarantee that if 34 states do call for a convention, leftists will file suits in every court to stop it.

I think you are right BUT I don’t think it will ever get that far to start with. Too many people invested in selling their souls to retain power etc.

I guess he will be added to Mueller’s witch hunt now.

“While Democrats continue to put politics before the American people, Republicans are working with President Trump…

I believe the first part, but I’m struggling with the second part of that statement.

I’d even say that most republicans are working with him. The problem is the narrow senate majority. It just takes three republican senators to tank a bill or a nomination.

Who wrote that speech for Trump? It was great. Trump needs that person to write a speech that Trump can give from the Oval Office to explain why it is so important to fire Mueller, clean up Washington, and get the Congress to start to actually work and confirm all his nominees, judicial and otherwise.