Jihad in the UK a “generational problem”, won’t be going away anytime soon: ex-Director General of MI5 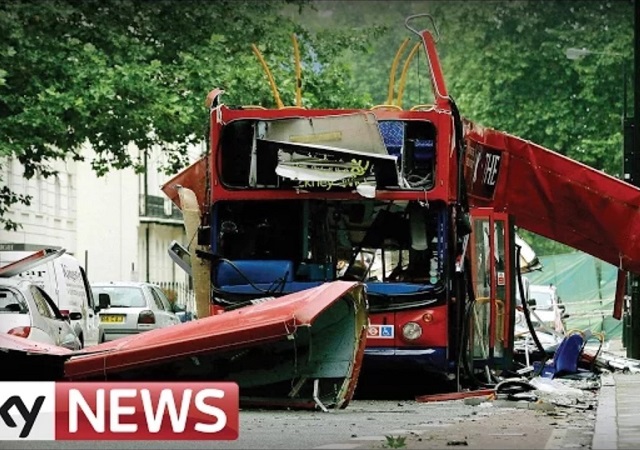 The UK might “face an Islamist terrorist threat for the next 30 years,” warns country’s former spy chief. According to Jonathan Evans, who resigned as Director General of MI5 four years ago, threat of Jihad to the country was a “generational problem” and won’t be going away anytime soon. “I think that we are going to be facing 20, 30 years of terrorist threats,” Evans told BBC.

Britain has been rocked by four Jihadi terror attacks this year. The worst of which took place at the London Bridge in the beginning of June, where three Islamic terrorists drove a van into passers-by and subsequently went into a stabbing spree, killing 8 and injuring 48 others. Most of these assailants come from Britain’s vast migrant Muslim population.

Jonathan Evans, who stepped down as director general of the spy agency in 2013, described the threat as a “generational problem” which will take decades to tackle. (…)

Lord Evans, who now sits in the House of Lords as a crossbench peer, told BBC Radio 4’s Today programme: “I think on the terrorism side we are at least 20 years into this. My guess is that we will still be dealing with the long tail in another 20 years time.

“I think this is genuinely a generational problem. When I left MI5 in 2013 if I had been asked I would have said that I thought that we probably were over the worst of the al-Qaeda threat. (…)

“I think that we are going to be facing 20, 30 years of terrorist threats and therefore we need absolutely critically to persevere and just keep doing it.”

The majority of the UK’s 3 million-strong Muslims population originates from the Indian Subcontinent, mainly Pakistan and Bangladesh. Islamist mobilisation that began in these countries in the late 70s and led to the formation of Islamic terror groups such as Taliban and Al Qaeda has radicalised parts of the country’s immigrant Muslim population.

Their growing demographic strength has encouraged the migrant Muslims to assert their political will on the country as well. According to a survey conducted by the UK broadcaster Channel 4 last year, 23 percent of  British Muslims expressed public support for the introduction of Sharia Law to the country. Though a third of them were totally down with male polygamy, over half of them wanted homosexuality to be made illegal.

Despite having to do without Sharia Law, which includes social pastimes such as public stoning of women and cliff-jumping for gay people—albeit without the safety cord, nearly 90 percent of the Muslim respondents agreed that “Britain was a good place for Muslims to live in”.

Well, at least Multiculturalism is working for someone. Maybe not so much for the female Muslim victims of child marriage, genital mutilation or ‘honour’ killings, but Europe’s political elite and media are too busy celebrating their imported diversity to care about such nitty-gritty.

The former MI5 chief is correct in calling Islamism a “generational problem” for the UK. Europe’s coming generations will be condemned to deal with the consequences of today’s unregulated mass migration from Arab and Muslim countries.

Why only 20 or 30 years? This seems disingenuous as it implies they are doing something to limit the problem to one generation. On the contrary, they continue to import the problem and let it fester.

Every act of terror should be met with very large numbers of deportations, and those should include all relatives of the terrorists.

Sounds like the same non-sense we are hearing here in Sweden. A suburb near where I live instituted an intensive program to make it safe by the year 2029 but it mostly consists of kicking the criminal immigrants out of and banning them from community housing. This just moves the criminals to other communities and the generational thing is not the bed of roses the Left propagandizes. The successive generations are even more radical. There are few deportations for criminal asylum applicants and a very short period required to become a Swedish citizen. Which of course leads to chain immigration. The worst is that we apparently do not have enough criminals. Many of the future problems could easily be avoided. If you are raping, robbing and murdering while you are seeking asylum your application should be rejected however this is considered Racist Wrong Think. There seems to be little hope here. Brexit sounded great, SwExit sounds even better but what is the point if your own government is infested with bureaucrats that are as bad or worse than those in the EU. smh…

“Safe Angered” – Gothenburg suburb Angered should be safe to live in 2029Published on May 11 2017 at 16:22
http://www.friatider.se/malet-angered-ska-vara-tryggt-att-bo-i-om-tolv-ar

I think that we are going to be facing 20, 30 years of terrorist threats

This strikes me as unwarranted optimism.

I took it to mean that by this time they would be conquered, the ball game would be over.

Although I’m an American now, I am originally from England. Every now and then, I think that it would be nice to go back for a visit, see my family and old friends, eat some of the food that I grew up eating, etc.

Except the dumb bastards in charge won’t let me bring a sidearm. And that puts me off. I’d be willing to meet them halfway and conceal it but, somehow, I don’t think they’d go for that.

That said, Ulster is the only part of the UK where people are still allowed to carry sidearms for personal protection. Perhaps I could write the leadership of the DUP (most of whom carry, I’m sure) and ask them to intervene on my behalf?

No way 30 years. Once the UK put on – volitionally no less! – the Shirt of Nessus by admitting Muslims, and in large numbers, it assured itself that it will never be free of terrorism since Muslims are commanded by their holy book to wage jihad until the whole world utters the Shahada.

This is especially on you, Labour and Blair.

This insufferable twit, Chief Dropping Bull Fauxcahontas Warren, desperately needs a makeover — she claims to speak for the “middle class,” but, she dresses in these ridiculous fashion jackets with upturned collars, as elitist a sartorial choice as you’ll ever see. Just like Hillary, with her garish, yellow “Chairman Mao”-style jackets. Both of these divas are as far removed — geographically, fiscally and emotionally — from the “middle class” as one can possibly get, and, their wardrobe choices amply demonstrate it.

Sorry. You posted on the wrong article.

Germany has strong laws against Nazis and they should equate Islam with Nazism. England has laws against slander and racism. There is no reason they can’t use these laws against Islam.

In 30 years Britain, Germany, and Sweden will be owned by Islam. I think it equally likely that a formal Islamic army, probably Turkey’s (who at a minimum want Greece and the Balkans back under their control), will have made an incursion into Europe by then.

Thank you, Swedish gentleman for giving up an update on what’s happening there.

America is going to turn muslim also if we don’t get real about the problem and adopt a constitutional amendment if necessary enabling us to strip muslims of citizenship if they so much as jaywalk. Of course, they usually do spontaneous murderous attacks so that they usually have a clean record until they murder.

So, we should look at banning the religion or enabling deporting all practicing muslims by constitutional amendment.

The way things are looking, America is going to consent to allowing them to procreate here and take over. The constitution isn’t a religion; we can amend it. It’s not a suicide pact. We don’t have to continue to allow a theocracy completely at odds with our way of life to continue to incubate here.

BIG IF..
If current UK Muslims Reject Islamism which is NOT Going to Happen..ever

If the UK does not rid itself of this disease, it will be forever.

the caliphate is proceeding apace.

what is the strangest part of all this, is that the so called liberals, who don’t procreate, are willing to commit mass suicide just so they can pay substandard wages.

this is not just a Eurabia problem.
In the USA, the same people that shout anti Cristian and anti Jewish philosophy are just fine and dandy about Islam.
Of course the truth is that they fear muslims – see charlie habdo cartoon rioting.

Islamic riots kill as Charlie Hebdo Prophet Muhammad cartoons …
http://www.washingtontimes.com/…/islamic-riots-kill-as-charlie-hebdo-prophet-muhamm/
Jan 19, 2015 – At least 10 people have died in protests and riots around the Islamic … Charlie Hebdo’s latest publication of a cartoon depicting the Prophet …

For as long as you have Muslims you will have terrorism.

People should be thinking about dilution of the gene pool in western countries.
A huge percentage of humanity’s advancements come from Ashkenazi Jews and Caucasians.
Also, American blacks average IQ (yes I understand that like other races they produce some with much higher intelligence).
I mention this because American blacks typically have between a third and up to two thirds Caucasian linage, which one would expect to have raised the average IQ higher than 85. The fact that it has not implies that genes driving higher IQ are not dominate.