U. Nebraska-Lincoln Profs Harass President of Turning Point on Campus

U. Nebraska-Lincoln Profs Harass President of Turning Point on Campus

Despite this, she recruited 56 students. 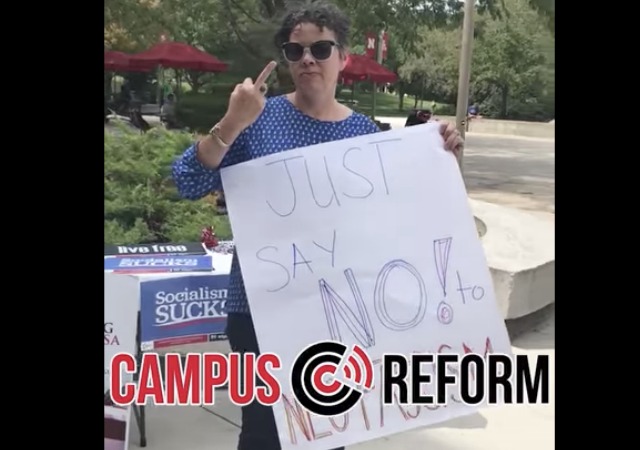 Turning Point USA, founded by conservative activist Charlie Kirk, is an organization aimed at teaching students about “fiscal responsibility, free markets, and limited governments.” Well, the president of the organization’s chapter at University of Nebraska-Lincoln received harassment as she recruited students on campus.

Worst part? PROFESSORS participated in the harassment. From Campus Reform:

According to chapter President Katie Mullen, at least three professors circled the table while carrying signs and yelling things like “f**k Charlie Kirk” and “TPUSA Nazis.”

Associate Professor Amanda Gailey was pictured holding a sign that stated “Turning Point: please put me on your watchlist,” even signing her name to the impromptu appeal.

Mullen told Campus Reform that a university administrator eventually came out and told her she could not table because she was in a free speech zone. Campus police were called, however, and after assessing the situation they informed Mullen that she had the right to stay and table.

“I was honestly shocked and scared. I was there for a couple hours and had no real issues but a couple debates,” Mullen told Campus Reform. “They came with posters screaming profanities at me and people passing by.”

“I didn’t even engage, but I kept tabling as I wasn’t going to let them silence me,” she continued, but conceded that after a while, “I got overwhelmed and scared and started to cry,” at which point the professors “screamed [that] I was crying for attention.”

“It shocks me that these are professors that are supposed to teach and support students and they were bullying me,” she remarked.

Despite the furor, however, Mullen claims that her TPUSA chapter attracted 56 new sign-ups over the course of the day.

I saw protestors but they weren’t harassing anyone. Faux news, Folks.

The right to free speech includes the right to be heard by willing listeners without being drowned out, yelled at, intimidated, etc.

Have you not ever been to a rally?

So you actually believe the end justifies the means, then?

You got one young lady sitting at a table to engage anyone wanting to talk to her, and three neofascists (by their fruit shall you know them) calling HER a fascist (totally self-unaware that they are the ones acting like brown shirts) screaming insults, making rude gestures, putting words in her mouth she’s not uttering, trying to scare off anyone curious about what the table is about.

Then to top it all off, a fellow traveler also working at the university shows up to (also) lie in her official capacity and tell her that SHE is violating free speach by being in a “free speech zone”. Orwellian to the point of absurdity.

Let’s try a little mental exercise to see if we can stretch the thinking processes of any Lefty who thinks harassment is not harassment if it’s in a “good” cause. If simular tactics were used to scare off anyone wanting to go into a Planned Parenthood Abortion Clinic and make those working there upset and afraid to the point of tears, how hard would it be to find a court willing to issue a restraining order calling in-your-face tactics like this illegal harassment, and curbing the protestors freedom to intimidate?

except your version doesn’t reflect what really happened. I don’t know who wrote this story, but it really doesn’t capture what happened. That a professor who was protesting comforted the student and the group toned it down when the young woman started crying suggests there was more going on that this article suggests. Others who knew her suggested they were “crocodile” tears. Who knows. But they were taken seriously. It seems a very mean-spirited person wrote this blog. Our country is at stake. Let’s take the time to verify what we read.

Just what’s on that video certainly counts as harassment. A rather pathetic form of harassment, but loudly calling someone a neo-fascist and a white supremacist in public looks like harassment to me.

Mullen told Campus Reform that a university administrator eventually came out and told her she could not table because she was in a free speech zone.

Also, can someone explain to me what this particular bit of Orwellian doublespeak means? Is “table” a verb now?

It looked just like a protest usually looks, not at all personal harassment. They weren’t calling HER a fascist, in fact I didn’t see anyone approach her . Comments were directed at the organization. It looked more like protesters milling around in front of the table with the intention of telling folks walking by. I think when we protest (on either side), it is about the group not the person standing at a table. In fact, I know one professor you mention in the article walked over to the young woman to console her and made it clear that comments weren’t directed toward her. It was really very touching. Very American.

Yea, I was a student there sometime ago and you had to get permission to bring a table and give out stuff. Public speaking is ok; it’s a public area but safety and security wants to control how many and where so as to not cause harm to anyone crossing the area (which isn’t that big).