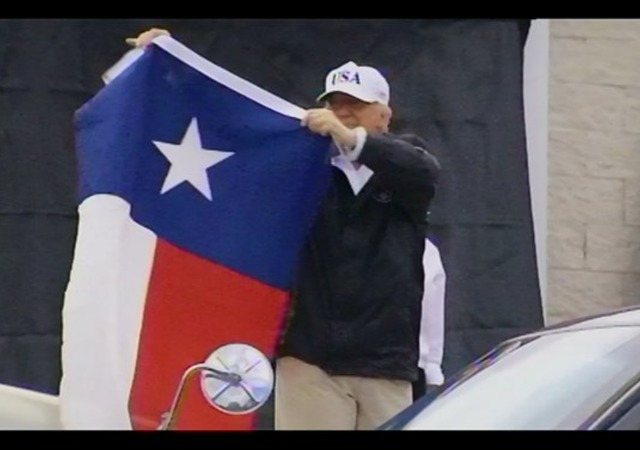 President Donald Trump and First Lady Melania Trump boarded Air Force One this morning (yes, I covered the left losing its mind over her freaking shoes) to survey the damage and speak to Texas officials about recovery. From Fox News:

“We want to do it better than ever before,” Trump said of the recovery. “We want to be looked at in five years or ten years from now as this is the way to do it.”

Speaking of the storm, the president said: “This was of epic proportion. Nobody has ever seen anything like this.”

The administration has also encouraged citizens to donate what they can to the Red Cross, Salvation Army, and the ASPCA. Do not forget the animals! They need food and shelter, too.

He also told the people that the government is “here to take care of you” and that everyone will get the cities “back and operating immediately.”

Pres Trump holds up Texas flag after addressing crowd outside his storm response briefing. “We love you. You are special,” he says. pic.twitter.com/BJAuScZi0D

By the time Hurricane Harvey ends, areas could receive up to 50″ of water. The hurricane has affected around 6.8 million people across the coastline and officials believe recovery will cost $30 billion.

However, a finalized schedule never happened because Trump did not want to cause disruptions. From The Texas Tribune:

Trump’s schedule in Texas does not appear to be entirely finalized. Sarah Huckabee Sanders, the White House press secretary, told reporters aboard Air Force One that Trump’s schedule is “a little bit more fluid today than a normal travel day” due to the weather and other storm-related circumstances, according to a pool report.

“The president wants to be very cautious about making sure that any activity doesn’t disrupt any of the recovery efforts that are still ongoing, which is the reason for the locations we are going here today,” Huckabee Sanders said. “As of right now, I don’t know that we will be able to get to some of the really damaged areas.”

“My wife and I will be in southeast Texas later this week, and we’re going to continue to provide all of the resources necessary to advance the efforts to rescue people that are enduring this storm,” he said.

But what was he wearing? Surely that’s the important part. How insensitive of him to wear a hat that says “USA” when these poor people are cut off from the rest of the country. And a white hat, at that. OK, I’ve got nothing.

And what kind of shoes, of course. That does seem to be all that the press paid strict attention to on this visit.

You may be right: insufficient color diversity. Trump is the anti-racist, the anti-Democrat, the anti-Liberal, the anti-Progressive. He probably recognizes the value and dignity of each individual piece of clothing, too.

We all need to pitch in.

Local VFWs will be busy, and will put any contributions to good use.

where are ALL countries that we help during disasters ?

what are they donating and helping out ?

or is just Uncle Sam who helps others ???

what about all SJWs ??
Fauxcahontas are you on the warpath ???

Just a quick up-date on Harvey…

Sunny sky here, NO chance of rain the rest of the day, 20% the next several days, and a N or NW wind that will help push water out into the Gulf…!!!

I am with you. We, in the NW of Harris county, got a gift. Water to the front step, pond to the rim…rain everywhere. Today, the front street is dry. The sun came out. Forever, how bad the storm was…we did not suffer.

To those still suffering…help will come…. To those helping from near and far…thank you. We are all here to help. Thank you for showing what people are supposed to do. For everyone else…please continue in your hope, prayers, and charity of heart.

One of the things I loved about this visit was that President Trump tried to be as non-disruptive as possible. Still, he and Melania showed their love for us all.

…unlike Obama. When he came to Asheville, NC – allegedly for some BBQ – he shunned the black-owned BBQ joint (Circle B Ranch) right across the street from the airport, and drove his entourage right through the middle of town to eat at 12 Bones on the opposite side of town. Asheville was basically shut down for several hours.