Trump endorsed Strange, but the Special Election should not be about consolidating Mitch McConnell’s power. 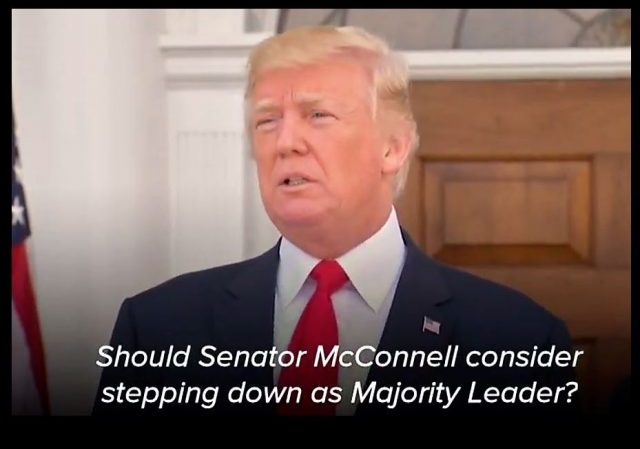 Next Tuesday, August 15, is an Alabama Special Election primary for the Republican nomination to replace Jeff Sessions in the U.S. Senate.

Luther Strange was an interim appointment, and is running. Congressman Mo Brooks and “controversial” former Alabama Supreme Court Chief Justice Roy Moore also are running. Since whoever gets the Republican nomination is all but guaranteed to win in the general election, the Republican Special Election essentially is the election.

If no candidate gets 50% of the vote, it goes to a September 26 runoff. According to polling released today, Moore is leading, with Brooks and Strange neck and neck for second place. AL.com reports:

In a hypothetical runoff between Moore and Strange, the judge would prevail over the incumbent senator, 45 percent to 35 percent, the survey found.

The polling was conducted in the middle of Strange picking up the endorsement of President Trump.

The last thing Majority Leader McConnell wants is yet another dissenter in the ranks, so he’s throwing the full force of his war machine behind the current and recently appointed Senator Luther Strange. McConnell hopes to keep contenders Rep. Mo Brooks (a member of the House Freedom Caucus) and former state Supreme Court Chief Justice Roy Moore out of a runoff for one reason — both have vocalized opposition to McConnell.

Most of what I’ve seen about the race prior the last couple of days has been the seemingly endless flow of emails from the Republican Senate Leadership Fund, effectively controlled by Mitch McConnell, attacking Brooks as not sufficiently pro-Trump, and as anti-Trump. Here’s just one example: 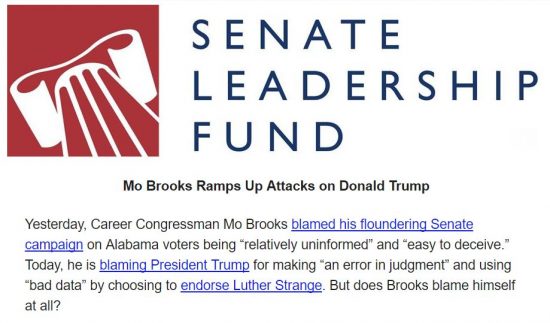 I began to pay attention to the race after Trump endorsed Strange, the McConnell-backed establishment candidate. Mark Levin expressed reacted:

Let’s put aside the fact that Luther Strange has been embraced by every lobbyist, special interest cartel, Mitch McConnell, and Karl Rove. This man has already been in office for six months and has quietly gone along with every last morsel of McConnell’s agenda. When Rand Paul, Mike Lee, and Ted Cruz were fighting to repeal Obamacare, Strange was never anywhere close to the fight. Indeed, he’s been in the witness protection program on every issue. Which is just the way McConnell likes it.

So now I’m paying attention. Alabama is a safe red state. There’s no reason to compromise in deep red territory. In blue territory, like Michigan, you don’t get that luxury so you go with whoever can win – and if that’s Kid Rock, so be it.

I don’t know a lot about the candidates in the Alabama Special Election, so I don’t know who the best conservative candidate is. But the interests of Mitch McConnell, conservatism, and Trump don’t necessarily converge.

Since his endorsement of Strange, Trump has started a mini-Twitter campaign against McConnell, after McConnell complained that Trump had unrealistic expectations as to getting things done in Washington.

Trump was coy when asked if McConnell should step aside:

As I’ve stated many times before, Trump needs to be pushed in a conservative direction whenever possible. Building a conservative caucus is one of the ways to do that.

The Alabama Special Election should be about building a conservative caucus in the Senate, not consolidating Mitch McConnell’s power. Trump could win by Strange losing.

This down-thumbing of my approval and agreement with the Prof. must be a proxy for disapproval of the Prof.

You really should have the guts to say what you feel in a comment to the Prof.

Trump is a salesman. If he sees his customers starting to pull away, he’ll switch positions. One way or the other, Strange has to lose. Send money to Moore, and keep telling Trump to stop endorsing the swamp!

To get Moore, vote for Strange in the first round.

I am not a Lawyer but Judge Moore has embraced Religious Freedom and Family values. Goto his Twitter page read the comments on anything he tweets
The left hates him. Elect him to the Senate then send him to SCOTUS. WATCH heads explode.

re: “Elect him to the Senate then send him to SCOTUS. WATCH heads explode.”

Seriously, a tingle just went up my leg! LOL I grabbed the kitty and screamed, “Yaaaaah”!

But…what difference does it really make right now? Judge Moore, whom I really respect, would not pass the interrogation by Congress. They would turn down his nomination in a heartbeat for the same reason he is eminently qualified – a Christian who loves America. Congress desires Harvard or Columbia atheists who identify themselves as intellectuals; “Professing themselves to be wise, they became fools…”

Then out in stocks for a week in the middle of the mall of america.

Then sent to cuba for their health care.

And if they’re still aluve, forced to listen to obama speeches for the rest of their rotten lives.

Boehner has been out of office for over a year. Why waste the time & effort?

Roy Moore obviously understands the Constitution, which is why progressives and RINOs removed him. Roy Moore for US Senate!!

According to polls, the way to make that happen is to back Strange in the first round. Trust Trump!

2 downvotes for a simple factual statement, nobody trying to show I am wrong.

McConnell has done everything he could for Trump’s agenda, as far as I can tell. He got all the nominees through, and also Neil Gorsuch, over unified Dem opposition, with a bare majority containing at least 5 Trump haters. That’s whipping, the job of the leadership, and he did it.

Who would replace him as Majority Leader? Who would do the job better? Maybe John McCain would win the election, he’s so popular after all. Or some other never-Trumper. It’s a big risk isn’t it?

This I think is why Trump wants to keep the status quo, which he has invested in by making McConnell’s wife a Cabinet member.

Mo Brooks shouldn’t come in from the lower chamber and immediately try to change the Senate leadership. What better idea does he have? Maybe to destroy what’s working and hand the victory to Charles Schumer.

Here is another theory. Trump publicly endorsing Lex Luther knowing that he probably does not win but he gave it the college try to appease Sessions and Mitch but gets Moore all along.

Nothing surprises me about Trump.

Roy Moore was Chief Justice of the Alabama Supreme Court and REMOVED because he wouldn’t bow to SCOTUS’s insane rulings.

Can’t remember if he was ultimately removed for not removing a 10 commandments monument or not approving gay marriage.

Moore is AMERICAN, not KENYAN, to his CORE.

He doesn’t bow to the false god of judicial supremacy.

Moore is THE man.

Brooks is a your typical “I’ll cave to PC a little so maybe I can slide some sensible things in” man.