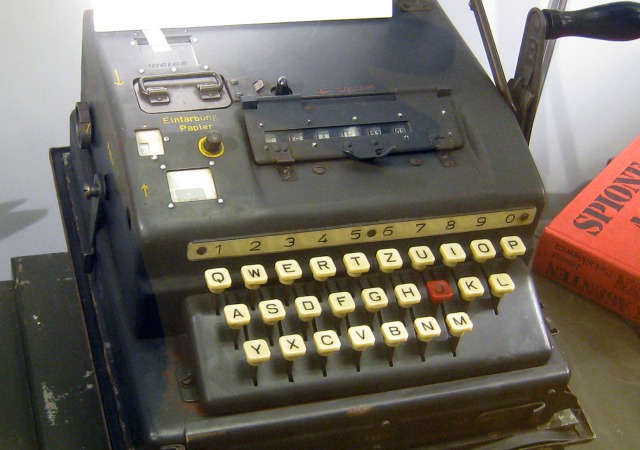 Two treasure hunters went out into the woods near Munich and came out with a huge discovery….a Nazi code making machine! From The Times of London:

The so-called Hitler Mill was intended to replace the Enigma machines that turned Nazi war commands into complex codes. The SG-41 encryption machine earned its nickname because it had a large handle on one side, which gave it the appearance of an oversized coffee grinder.

Only 500 were made by the Nazis and they were supplied to German army units in October 1944. The two treasure hunters, armed with metal detectors, came upon one in a forest at Aying in Bavaria.

Max Schöps, a carpenter, and Volker Schranner were alerted when their detectors began to beep. They dug 15in beneath the surface and found the rusting machine, caked in mud. “I took it to be a Wehrmacht typewriter,” Mr Schranner, 36, said. “It didn’t interest me, I was after gold coins and treasure. I told Max he could have it.”

Mr Schöps, 23, took the machine home and discovered it was actually the SG-41 developed by Fritz Menzer, who built a number of encryption coding machines during the war. The Hitler Mill was more secure as an encryption machine than Enigma, whose code was broken by Alan Turing and his team at Bletchley Park.

Carola Dahlke, a cryptography expert who works at the Deutsches Museum in Munich, said the discovery was an incredible stroke of luck because most Hitler Mills did not survive the war. The machine is to be restored and will go on display, having been donated to the museum by Mr Schöps.

According to Mavis Batey, a former codebreaker, the team at Bletchley Park knew that the SG-41 had six cipher wheels that moved very irregularly, sometimes even backwards. They were not able to reconstruct the wheel settings and the pin patterns.

She described the SG-41 as a “remarkable” machine. “Had it been implemented on a large scale, as intended, it would have posed a real problem for the Allied codebreakers,” the report stated.

I’m sorry, but there’s no way this machine was buried in soil for 70 years and still be in that condition. It must have been in a container of some kind, and even then… I’m calling fake news on this one.

The photo is not the one they found buried. Times story has a picture of it but you need to register. More interesting info. here about it:
http://scienceblogs.de/klausis-krypto-kolumne/2017/08/19/rare-ww2-encryption-machine-hitler-mill-found-in-bavarian-forest/

Now the unit at the top of the London Times article looked like it had been buried for 70 years. I guess Mary didn’t post that one because it was Copyrighted?

ever heard of illustrations? I saw the photo knew it wasn’t what was found, but knew that it was an illustration of what the found object would look like. sheesh

I may not fall into your lofty category of self-esteem, but feel like I can read English. The caption says “What a Find…” followed by the photo of a pristine crypto unit. My limited intelligence led me to believe that the photo under the caption was of what was found. Sheesh yourself…