The Pepper Ball Shot Heard Round the Internet

The Pepper Ball Shot Heard Round the Internet

Right in the crotch 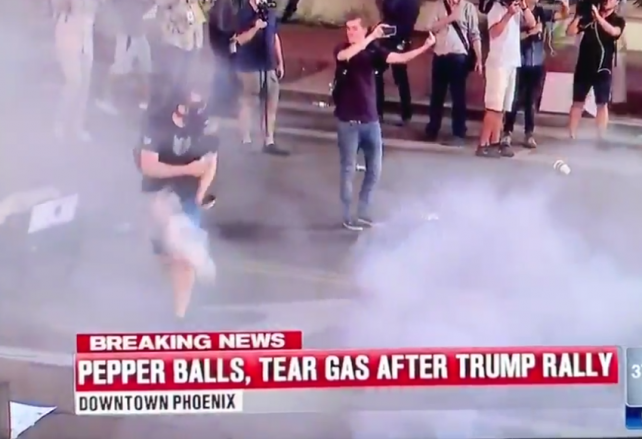 Phoenix protesters stirring up trouble after President Trump’s rally received a less than kind welcome from local police. Gas and pepper balls were lobbed into groups of hooligans in an effort to disband the juvenile chaos.

One protester got a little more than he bargained for and is now part of internet lore.

This athletic shorted gentleman, donning a gas mask was shot right square in the nads with a pepper ball after he kicked a gas canister back in the direction of law enforcement.

Making it the bright spot in an otherwise typical protest

In one's darkest hour, when hope is fleeting, this is the ray of sunshine that fills the heart with joy… pic.twitter.com/5NCfRyPdWh

Officer1: Did that little jerk just kick the gas back at us?
Officer2: Yeah!
Officer1: Hold my riot shield…#pepperballs https://t.co/i9xZ36ZrGU

Maybe it's because it's a week from football season, but every time I see #PepperBalls I hear "…here comes the BOOM!" in my head.

WATCH: I upgraded the video of the protester getting hit in the balls with a tear gas canister… with Celine Dion. #PhoenixRally pic.twitter.com/zVeHfUQz9C

The Simon and Garfunkel Treatment

Why do I keep thinking of Jerry Lee Lewis?

That or Jerry Lewis – it was great slapstick

I saw this last night shortly after it was posted. I’ve probably watched it two dozen times since then and it NEVER gets old.

I imagine the cop who shot him will never have to buy his or her own drinks ever again.

When training to use less lethal shotgun, the inner thighs were the primary target area. Never experienced it, but I was told it hurt like hell. And if you miss a bit and hit the “bullseye”? Oh, well. Too bad, so sad.

Kap jersey guy “rescuing him” is even better on the Irony Scale. As Ace sez: 100 MilliKohns

James Woods said: “In one’s darkest hour, when hope is fleeting, this is the ray of sunshine that fills the heart with joy… ”

Nothing I can say can top that.

First, I would like to admit we tend to complain about police marksmanship at times. However, to hit a target this small with one shot is quite an accomplishment.

My hat is off to you, Unnamed Police Officer.

The Phoenix PD needs to track this guy down and charge him with assault for kicking the tear gas canister at them.

Phoenix has a real leftwing jerk for a Mayor and I am guessing he will try to blame the police for injuring this gasmask wearing, bottle of piss carrying, canister kicking, peace loving, anti-violence citizen with the funny smelling crotch.

No, I must disagree. Getting shot in the ‘nads is IMO a suitable punishment, with the added bonus of public humiliation on YouTube. That’s not to mention the entertainment value.

You won’t see that happening in a deep blue city now will ya.
Come back REEEEEEL soon and thanks!

I looovvveee the Simon and Garfunkel treatment. So lovely, so delicious, so satisfying!

Ah yes, it’s the little things which make it all worthwhile …

There’s that great scene in “The Natural” where the third-baseman “catches” a line drive. “Gently rocking, rocking…”

Seem like the LEOs were much more prone to doing their duty than many here have predicted. Jes’ sayin’…

That video clip as a screen saver could possibly bring all work across the nation’s offices to a standstill, a lot more effective weapon against capitalism than ANTIFA. Quite Mesmerizing.

“the vision that was planeted in my brain still remains” HAHAHAHAHA

If there is any justice in the universe this #^*&^%$ can no longer reproduce.

The bigger question in all this: walking like that, how is he going to make it back down the stairs to his parent’s basement?

He probably needs to go up the stairs, to his dorm room at ASU, where he’s majoring in Womyn’s Studies, and has a Che poster on his wall next to Fairey’s Obama poster, and his “I’m With Her” bumper sticker from 2016.

Bum. Bum. Bum.
Another one bites the dust.

Truth be known, there are probably millions of people who wish they had made that shot.

The feelgood video of the decade (for everyone except the guy).

And that’s what you get for wearing jorts.

The libtard speaks from his hospital bed:

Yup, you heard that right – the OB/GYN doc is going to take a look at the injury to his nether regions.

These people get weirder by the minute.

An OB/GYN? Is this a male, or one of those pretend men?

WTF? You mean all those jokes about a mangina were true!?

According to the jerk hit in the crouch “We were just trying to resist the Nazis. Then he talks about how he was just minding his business and bam. “he hit me in my no-no.”

He does say that a OB/GYN is going to check the injury??

Watch the video at the above link. Guy seem to be a true wacky bird!

Nazis have their own pepper spray. Who knew? “New, IMPROVED, Nazi Spray!!!”

It’s way past time for President Trump to use the powers that took down the KKK and the evil Democrat politicians who supported them against the Progressive Fascist who are violating the civil rights of Americans and their Democratic enablers.

That’s the only kind of kneeling I can tolerate in any “Ball” sport!

The man hit by a pepper ball round in a video that has since gone viral following protests in Phoenix, Az. is now facing charges for aggravated assault on police.

Twenty-nine-year-old Joshua Stuart Cobin was seen kicking a round of tear gas at police officers during a riot on Tuesday night. Following his actions, police fired a pepper ball at his groin, prompting him to fall over in pain. He was helped up by another man wearing a Colin Kaepernick jersey.

On style alone the kick struggled. The pantomime that followed was priceless.