The fight isn’t over, though. 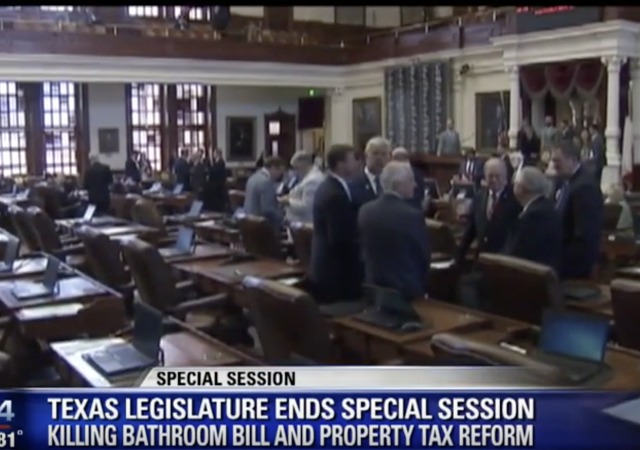 The Texas legislature failed to pass a bathroom bill that regulated the use of public restrooms for transgender people after a 29-day special session. There’s a possibility that Republican Governor Greg Abbott will call another special session to address this bill along with other issues. From The Associated Press:

When asked if the governor plans to call another special session, a spokesman referred to a Monday radio interview during which Mr. Abbott said, “Obviously, all options are always on the table.”

The bill also split the Republicans in the legislature:

The bathroom bill enjoyed unanimous Republican support in the Senate. But the Texas House killed any chance of the legislation becoming law, letting the bills die quietly by failing to hold a vote on the issue. House leaders responsible for the death blow, including Republican Speaker Joe Straus of San Antonio, said the measures were solutions in search of a problem.

Gov. Abbott even lashed out at House Speaker Joe Straus in his first public comments after the session ended:

In his first public comments after the session ended, Abbott on Wednesday morning blamed Straus for the failure of nearly half of his legislative agenda, including the bathroom bill, which he said he made a priority knowing the speaker was out to thwart its passage.

“The Speaker made it very clear to me personally that he opposed the privacy bill and said he would never allow it to be voted on,” Abbott told Lubbock KFYO radio host Chad Hasty. “There is absolutely no evidence he will ever change his mind on this issue.

Straus has sided with the numerous businesses who spoke out against the bill, including Apple and Hewlett Packard.

The LGBT community and groups have celebrated the failure of the bill. The Associated Press reported:

“This bill was a solution in search of a problem and would have put trans Texans at risk for discrimination and violence,” said Sarah Kate Ellis, president of GLAAD, an gay, lesbian and transgender media advocacy organization.

The activists know the fight against the bathroom bill isn’t completely over. From Dallas News:

Lou Weaver, transgender programs coordinator for the LGBT right group Equality Texas, said he was “cautious about any possible next steps by our elected officials” but “thankful for all the trans folks and parents of trans youth who kept pushing back.”

“Rest assured, the same eyes that watched Texas lawmakers this year will continue to keep a strong, watchful eye,” said HRC senior vice president JoDee Winterhof. “If the legislature attempts to attack our communities again, all of us will come out with the same level of force and strength.”

The fight is not over yet. Dallas News pointed out that the issue will probably come up against next year during the GOP primary, which means it could come back to the legislature in 2019.

Lt. Gov. Dan Patrick insisted that the bathroom bill will not go away. Republican Rep. Ron Simmons, who authored the bill, announced that it “will continue to be a source of debate in Texas until a statewide policy is set.”

This also means that Democrats will have to make a dent in the legislature or find a candidate that can defeat Abbott:

But the party still has not identified a credible candidate to run for governor, and Democratic U.S. Rep. Joaquin Castro reiterated Wednesday that it won’t be him.

“I’m convinced we’re going to have a strong slate of people who will step forward,” said Castro, whose party has not won statewide office in Texas since 1994, the nation’s longest losing streak.

“… that regulated the use of public restrooms for transgender people…”

No. Wrong. There’s no such thing as ‘transgendered people.’ The very term is anti-science. The facts provided by endocrinology, gynocology, genetics & basic biology tell us there are only 2 disctinctions in our species: male and female. There is no 3rd category of human being.

These so-called ‘trans’ people are mentally ill. Period. The fact that they are confused as to whether they should stand up or sit down too pee indicates a dysphoria and a desperate need for therapy.

As a limited government guy, I oppose government regulation of bathrooms on principle. Yet, the aggressive promotion to normalize these mentally ill crossdressers into society indicates a need to defend basic common sense and propriety against a deranged lobby eager to enable the public delusions of these mentally ill people.

Grow a spine, Texas, and defend common sense and propriety!

It seems to me the simple solution is to allow individual businesses to decide on their own how to handle bathroom access. There just aren’t very many trans-whatevers out there. I refuse to believe this is actually a real problem; people who don’t want their daughters to share a bathroom with a dude in a frock can simply ask what the establishment’s bathroom policy is and go somewhere else.

Given the relative number of trans-whatevers that actually exist and the number of parents concerned about such things, I suspect the market will resolve this situation in favor of normalcy pretty quickly.

Instead of passing more laws, can’t they just use obscenity laws, that are already on the books, to prosecute someone one if they are problem when it comes to the bathroom situation?

If some mental case walks into a female restroom and whips out his willie in front of a 5 year old girl, the only question should be casket or cremation and how to reimburse the mother for the bullet(s).

Full text of the bill (with annotations):
https://apps.texastribune.org/texas-bathroom-bill-annotated/

Remember the day when “gay”meant being in high spirits,
when “winning” was the opposite of losing
when “for better or for worse” was for real
when a broken oath of office broke the breaker?

THOSE WERE THE DAYS MY FRIEND

About 26 yearsago I was on a flight from Fl to Vegas with my attorney, an “Eastern LIBERAL, Harvard.

As an immigrant, and lacking a fancy education, I felt outgunned in our political discussion,in which I had declared, to his mild amusement, that I felt this country, and the West in general, was in decline, and slope we were on got steeper all the time, and would end ultimately with us going over the cliff, that was at the bottom of the slope.
His reaction was, well, mild, polite amusement, probably modified by the fact that I was his client.

I wonder what his opinion on this subject is today.