“The United States is prepared to take further action as necessary and as warranted.” 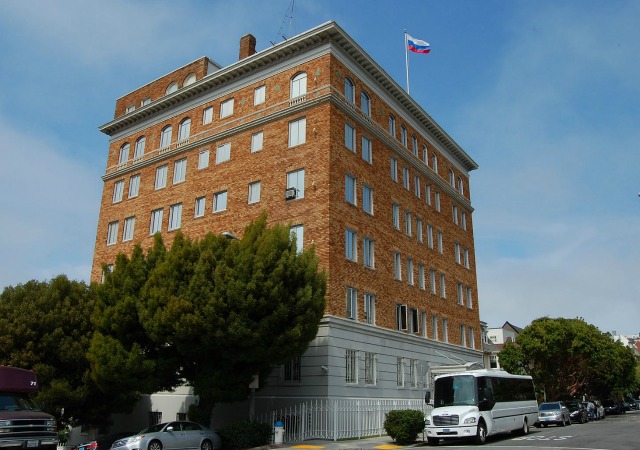 The State Department has told Russia to close its consulate in San Francisco, CA, by September 2. Yes, in only two days. The order also stated Russia must close a chancery in Washington, D.C., and a consular annex in New York City.

This is a direct response for Russia demanding the US to reduce its diplomats in Russia to 455 by September 1.

As the statement points out, this means Russia and the United States will each have three consulates. Josh Rogin at The Washington Post tweeted that a senior administration official said the administration is not expelling Russian diplomats at this time. I asked Rogin where the diplomats would go and he confirmed that they would go to “[A]ny of facilities in the US the Russians choose.”

A chancery annex “means the principal offices of a foreign mission (as defined in the Foreign Missions Act) used for diplomatic or related purposes, and any annexes to these offices or support facilities, and includes the site and any buildings on the site.”

Last month, Russia ordered that America reduce its diplomats to 455 in the entire country. The Kremlin also demanded that America shut down numerous properties around Russia.

“The passage of the new law on sanctions shows with all obviousness that relations with Russia have become hostage to the domestic political battle within the United States,” the Foreign Ministry said, adding that “the latest events show that in well-known circles in the United States, Russophobia and a course toward open confrontation with our country have taken hold.”

The Foreign Ministry also claims the sanctions create “unfair competitive advantage for the US economy” and consider the sanctions as “blackmail.”

Ministry officials ordered the closure of “a diplomatic retreat in a forested complex outside Moscow” and numerous “diplomatic storage sites.”

Russia made this demand even before President Donald Trump signed off on fresh sanctions against the country.

Trump signed that bill on August 2. These sanctions come from Russia’s aggression against Ukraine, which has been going on since March 2014 and includes the annexation of Crimea, and interference with our presidential election. From Fox News:

But a cornerstone of the legislation was a provision barring Trump from easing or waiving the additional penalties on Russia unless Congress agrees. The provisions were included to assuage concerns among lawmakers that the president’s push for better relations with Russian President Vladimir Putin might lead him to relax the penalties without first securing concessions from the Kremlin.

The 184-page bill seeks to hit Putin and the oligarchs close to him by targeting Russian corruption, human rights abusers, and crucial sectors of the Russian economy, including weapons sales and energy exports.

In recent days, though, Trump has suggested he’s tougher on Russia than many believe.

The bill underwent revisions to address concerns voiced by American oil and natural gas companies that sanctions specific to Russia’s energy sector could backfire on them to Moscow’s benefit. The bill raised the threshold for when U.S. firms would be prohibited from being part of energy projects that also included Russian businesses.

Booting them from SF?
He’s doing them a favor – further evidence of collusion with Putin//

Relaxing sanctions on Russia’s oil and gas sectors? The one significant area we can really leverage against Putin and the Rus oligarchs? Off the table? I’m glad to know our Top People are on the job making America great again! But we really ruined the Russian Milled Buckwheat futures market!!!

If 100 corrupt leftists are booted out of San Francisco, how can anyone tell?

notamemberofanyorganizedpolicital in reply to TheFineReport.com. | August 31, 2017 at 5:34 pm

Obama’s legacy as a global war/social justice president is secure, and, now, he may be credited with reopening the cold war, too. Progress.

What a loser, huh?

His ‘legacy’ will always smell bad.

His media diaper is full and smelly to capacity, and the history diaper leftist ‘historians’ will try to wrap around his middle will stink just as bad.

First glance, thought that was the Dallas/Texas School Book Depository!

But where will Pelosi worship now?

The Russians are going to turn a handsome profit on that building by condominium it. Its sits below Pacific Heights. (Some wags say, “Specific Whites”) in Cow hallow with killer-views.