“to avoid messages that are triggering, harmful, or harassing” 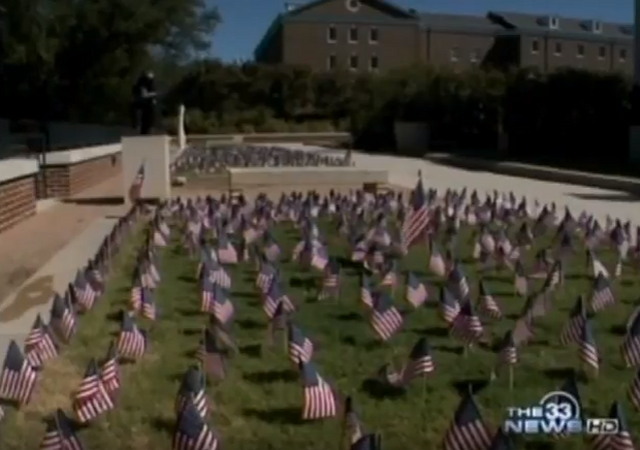 Every year, commemorating the memory of 9/11 is controversial on some college campuses. This has got to stop. Who exactly is offended by 9/11 memorials?

Southern Methodist University (SMU) is relegating a memorial to the victims of 9/11 to a secluded area of campus, rather than the central location it had occupied in past years.

Members of the Young Americans for Freedom (YAF) chapter at SMU recently filed paperwork for their annual display of flags honoring the victims of 9/11, but administrators denied the request in order to “respect the right of all members of the community to avoid messages that are triggering, harmful, or harassing.”

The SMU YAF chapter, like many across the country, participates in the annual 9/11 Never Forget Project by creating a memorial on campus of 2,977 American flags, each representing a person who lost their life in the attack.

At SMU, the event has previously been held on the well-trafficked Dallas Hall Lawn, a prominent location on campus.

When chapter leaders submitted a request to set up the 9/11 memorial in the same location this year, however, they were notified that they are no longer allowed to use the main campus lawn because the university had implemented a “new policy regarding Memorial Lawn Displays.”

The email explained that a memorial lawn display “is any type of visual recognition or commemoration of an event or political or social issue,” noting that examples “include, but are not limited to: crosses, flags, etc.”

The email also declared that SMU “respects the right of all members of the community to avoid messages that are triggering, harmful, or harassing.”

So, how long till the scool bans the display of flags on memorial day, because some is triggered?

“respects the right of all members of the community to avoid messages that are triggering, harmful, or harassing”

I wonder if they considered that making such a change might be ” triggering, harmful, or harassing” to those opposed to such a policy change. Or, if they did, it was a matter of who’s more vulnerable?

SMU is Exhibit A why federal funding of higher education should be terminated. All.of.it.

relocate the cretins who are upset (hopefully to Syria or Venezuela)

The memorial honors those who died. It does not attack or even mention who was responsible.

But because someone seeing the flags might “think” about who killed these people, it must be banned?

Everyday we read about sick actions by those in control of education – this shows there are no limits to their sickness.

Such is SMU, said by a TAMU Grad.