Hard to tell them apart, evidently 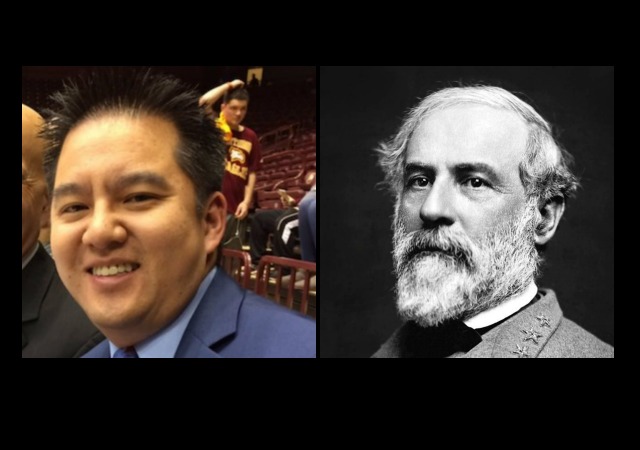 I’m truly at a loss with this one.

Last night I blogged about ESPN’s decision to reassign play-by-play announcer Robert Lee. Lee was scheduled to call UVa’s season opener in Charlottesville. As you’re probably aware at this point in the news cycle, Lee is Asian-American.

Rightly so, the people of the internet collectively rolled their eyes. ESPN had reached a new low.

Enter Reuters who, as I imagine this story unfurling, hiked up theirs pants leg and shouted “hold my beer!” 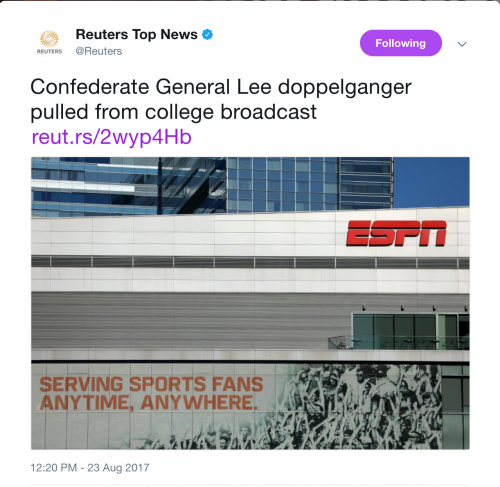 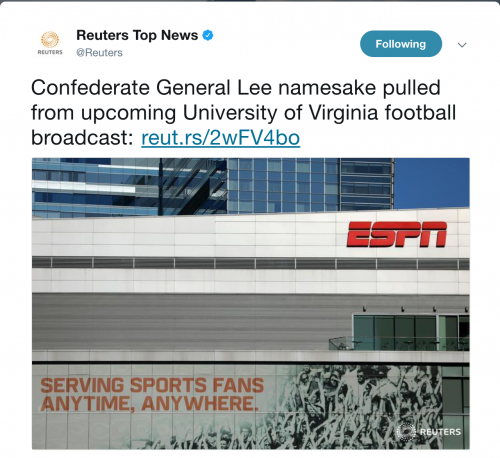 And in case you were wondering, there are not teaser tweets. Reuters used the same verbiage in their headlines: 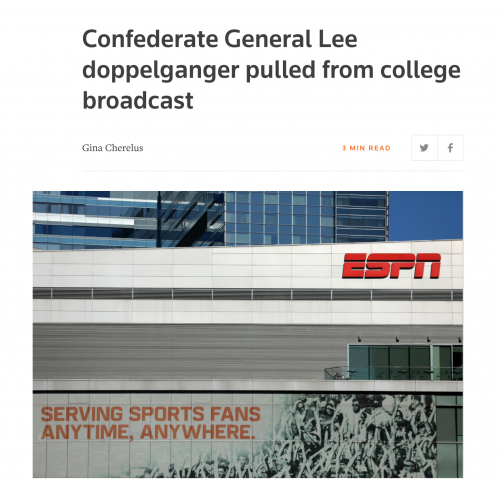 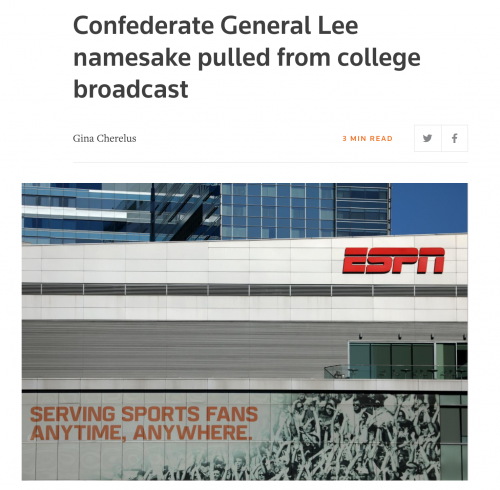 If you’re wondering when this anti-Trump, anti-statue, anti-history, anti-reality madness is going to end; I’ve got news for you. They’re only getting started.

Yup. And America’s rabid stupidity always finds fans up here in Canada. Indigenous peoples want Sir John A. MacDonald removed from public schools. In another thread I said it wasn’t going to stop at Confederate statues. It has nothing to do with justice or anything like that. It’s about the erasing of our history to make it easier for Marxism to finally take root. It’s our collective respect and knowledge of our Western classical liberalism that stands in the way.

I am sure an Asian-American family decided to name their son after a Confederate general. I guess Reuters’ reporter isn’t aware that Lee is a very common name in the Orient. But, there are a lot of things Reuters, AP and CNN reporters don’t know. Today Reuters referred to Antifa as “peace activists.”

Remember when you went to college and “J School” students were the dumbest kids on campus? Guess what? They still are.

Instead of calling the Asian Lee ‘Johnny Reb,’ the left will call him ‘Johnny Sparerib.’

And, speaking as someone with Far Eastern connections, they’ll say, “Whose racist? Surely not we!”

Oops. As someone with Far Eastern connections, I’m sure they’ll be unaware of how racist they’re being.

The prepositional phrase offset by a comma at the start of a sentence should refer to the subject. And I’m a grammar “nazi”!:(

Does he drive a Mustang named Traveler?

Close. It’s a Bronco, not a Mustang, and its vanity plate says TRAVLR.

I laughed so hard, I almost had to take a le–

All of your Lee’s are belong to us.
Further evidence of mental disease by the Left

This conspiracy goes all the way back. Even the great Hillel said, “If I am not Lee, then who is Lee?”

Good grief – for being so sensitive and “multi-culti,” these Leftists have beclowned themselves by their ignorance. Among Asians, the family name LEE is as common as dirt.

For those who are interested, the Chinese character for the family name Lee:

Not being able to input the Chinese characters directly in the combox here, this is the next best thing.

Yes, the name Lee goes back to the Klans of the Warring States period.

Isn’t that how Gen Lee (not the car) signed the surrender at Appomattox?

But is his full name “Robert Yee Lee”?

I agree with Mark Steyn. I can’t wait till they get around to Sheila Jackson Lee.

She’s a triple threat- Sheila is a Australian slang term for a woman, Jackson could remind people of Confederate General Stonewall Jackson, and of course Lee as in Robert E.

Lord knows she has the intellect of a stone wall.

Greenwich Village NYC: The famed Stonewall Inn is considering a name change to avoid being mistaken for a Confederate War Memorial.

If this isn’t ironic, don’t what else it could be

Obama to Name Stonewall Inn as First National Monument for Gay Rights
The Associated Press
May 04, 2016

(AP) New York’s iconic Stonewall Inn, where the modern gay rights movement took root, will become the first national monument honoring the history of gays and lesbians in the U.S. under a proposal President Barack Obama is preparing to approve.

Their food is so bad that enough people have died from eating it that they worry about becoming a memorial site? New Yorker City people (Obama ruined “folks”) never cease to amaze me.

On the bright side a young waitress used some Southern culture on me yesterday. First she called me Hon, then sweetheart, then finally honey. I wanted to tell her that I’m as dangerous at 70 as I was at 18, but didn’t get a chance. Of course, I wasn’t a very safe driver when I was 18.

And when put together, Shelia Jackson Lee is an idiom, meaning:
a woman dumber than anyone ever born in Australia, but smarter than Maxine Waters, and more competent than Hillary Clinton, and less disgusting than Michelle Obama.

Not a sports fan, and I have never even watched ESPN, but, I hope Robert Lee gets some kind of windfall out of this nonsense. He sure is getting publicity.

BREAKING: The Travelers Insurance Company is changing its name to avoid being mistaken for Robert E. Lee’s horse.

They’ve already cornered the market on the rear end of the horse!!

And cannot Trump Nationalize these monuments

Um, no, he can’t, any more than he can “nationalize” anything else. This isn’t some socialist country where that happens (much), and certainly not by presidential decree.

More federal government is not the answer.

Breaking news…..The Hawaiian Islands are renaming the lee side of all the islands.

What about the Leeward Islands?

Lord know we already have the WINDBAG-ward sides covered.

The music world is in trouble: It’s all over for David Lee Roth. Or Tommy Lee. Or John Lee Hooker. Or Lee Ritenour.

Ignore the malignant morons wasting all our time: help them go broke and disappear.

Not long ago a run was made at Atty General Sessions with a claim his given name of Jefferson was in honor of the first (and only) president of the CSA. It might have dawned on someone that it was a name he shared with Wm Jefferson Clinton, out first President from Dogpatch.

Next up… blanking out the Pickett fences in Norman Rockwell’s paintings….

the SJW are demanding name change for

The Leeward Islands, a group of islands in the West Indies. In English, the term refers to the northern islands of the Lesser Antilles chain. As a group they start east of Puerto Rico and reach southward to Dominica

Ok, just look at the freaks now working at espn. What else can anyone expect?

A “namesake” is generally someone who is _named after_ someone else, and not necessarily merely sharing the same name (https://en.wikipedia.org/wiki/Namesake), so Reuters comes across as even more absurd.