“What fuels it?… The anti-police rhetoric.” 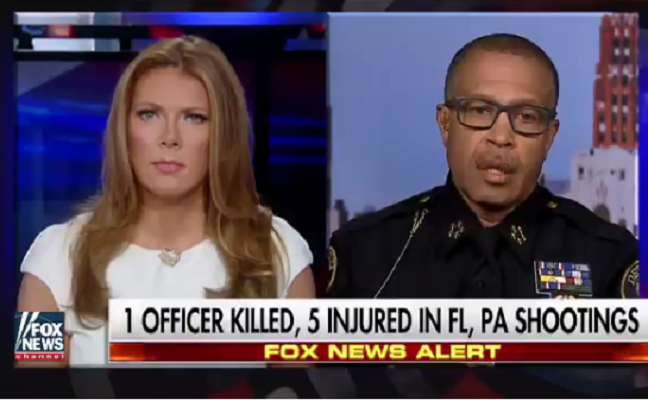 The circumstances of each of the shootings are not yet clear, but six police officers have been shot, one of whom was killed, in three incidents in Pennsylvania and Florida.

One police officer was killed and three wounded in nighttime shootings in two Florida cities where the officers were responding to suspected drug activity and reports of a suicide attempt, police said Saturday.

In Pennsylvania, two state troopers were shot outside a small-town store in Fairchance, south of Pittsburgh. State police say the troopers, both taken to hospitals after the Friday night shooting in Fairchance, were in stable condition.

One officer was killed and another gravely injured late Friday night in Kissimmee in central Florida just south of the theme park hub of Orlando. Kissimmee Police Chief Jeff O’Dell said at a news conference Saturday that a suspect, Everett Miller, was arrested several hours after the shootings.

He faces a first-degree murder charge. Authorities originally said they believed there were four suspects, but the chief said no other arrests are anticipated.

A police chief and commissioner from Detroit and New York City argue that the anti-police atmosphere that heightened under Obama and is being stoked by anti-Trump groups is to blame for these attacks on police.

Chief: "We've had 11 police officers in the city of Detroit shot or killed in the line of duty. What fuels it?… The anti-police rhetoric." pic.twitter.com/QQFuRJmvpr

Last night, a #Kissimmee cop was killed & another wounded; 2 #Jacksonville cops shot; 2 PA troopers shot. We need public w/ us, not against. pic.twitter.com/zilz8Za2ZA

The war on cops is moving ahead despite Hillary’s loss.