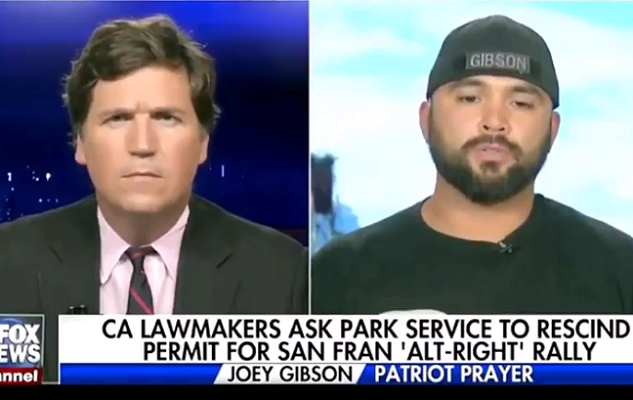 Having lost most of their political power, Democrats are desperately wielding their not inconsiderable social and cultural power. From colleges and universities to statues and flags, the regressive left is demonstrating an alarming anti-American sentiment that threatens to undermine not just our nation’s history but its very fabric.

Case in point: Californian leaders, including House minority leader Nancy Pelosi (D), have adamantly opposed a rally organized by the Patriot Prayer group on the grounds that it is “alt right” and “white supremacist.”  The problem, however, is that of the speakers scheduled to speak, only one was white.  Indeed, the group’s leader is neither white nor “alt right.”

Most people have not heard of the group Patriot Prayer until recently. The group claims to be for those who believe in free speech, love, freedom and truth. But from San Francisco Mayor Ed Lee, Congresswoman Nancy Pelosi and other local politicians, there has been strong condemnation for the group’s planned rally for Crissy Field this Saturday, August 26 in San Francisco.

KTVU spoke with the Patriot Prayer rally’s organizer Joey Gibson on Wednesday ahead of the event. Gibson says he’s being unfairly portrayed by politicians as a white supremacist and that that’s also not the demographic his group is trying to cater to.

Gibson says he’s absolutely not a white supremacist. “I’m Japanese. We have three black speakers, a couple Hispanic, an atheist, a transsexual. We’re extremely diverse. It’s really irresponsible for the leaders to call me a white supremacist. It’s completely unfounded.”

Watch Joey Gibson of Patriot Prayer explain this on Tucker:

Protesters opposing a right-wing gathering in liberal San Francisco claimed victory Saturday when the event was cancelled after city officials walled off a city park — a move that the event’s organizer said was more about silencing his group’s message than preventing a violent clash.

Civic leaders in San Francisco — a cradle of the free speech movement that prides itself on its tolerance — repeatedly voiced concerns that the event organized by Patriot Prayer would lead to a clash with counter-demonstrators.

Joey Gibson, who is Japanese American and leads Patriot Prayer, said his group disavows racism and hatred and wanted to promote dialogue with people who may not share its views. He cancelled a planned rally Saturday at a field under the shadow of the Golden Gate Bridge after he said his members received anonymous threats on social media and feared civic leaders and law enforcement would fail to protect them.

He said Saturday in a phone interview that he felt like San Francisco’s Democratic leaders had shut him down. Earlier in the week, San Francisco Mayor Ed Lee raised concerns that Patriot Prayer would attract hate speech and potential violence. U.S. Rep. Nancy Pelosi, a fellow Democrat who represents San Francisco, called the planned rally a “white supremacist” event.

Black-bloc- and antifa-backing Democrats don’t care if the intent of Patriot Prayer is peaceful, that the agenda is most assuredly and clearly not “white supremacist,” or even that these Democrat leaders are essentially and very publicly calling for the restriction of the First Amendment rights of Americans who do not agree with them.

In their hysterical efforts to block the Patriot Prayer’s rally, they either didn’t bother to find out what the group was about and who would be speaking or they did know and didn’t care.  They have apparently decided that free speech rallies by anyone, including non-whites, are automatically “white supremacist,” and this is alarming.

Counter-protesters were elated to have “them” “on the run” and chirped gleefully about their brand-new “social movement” and its victory against “hate,” a “hate” they completely fabricated.

Counterprotesters were keeping tabs on the fluid situation, responding to the change of plans by posting antihate posters at the new gathering site and vowing to turn up Saturday wherever the Patriot Prayer group landed.

“We’ve got them on the run, that’s for sure, but they’re still holding an event,” said Yvette Felarca, an organizer with the left-wing activist group By Any Means Necessary. “We’re still calling for everyone to come out.”

. . . . an organizer of the Berkeley rally, Amber Cummings, said in a rambling email Friday that she was urging people not to show up, because she feared violence by counterprotesters.

“It will be me alone attending, no one else please,” Cummings said. “In the event I am hurt or killed attending this rally, I ask you to please not retaliate on each other as a result of my injuries. Let my life be the last one lost.”

Prior to the cancellation of the Crissy Field rally, San Francisco and Berkeley officials urged residents opposed to the right-wing events to send a message by joining together for peaceful gatherings in locations far from the rallies. Many such demonstrations are planned this weekend.

“Y’all know that some people are coming tomorrow to our city,” Lee said outside City Hall on Friday, as hundreds of people gathered, stopping traffic on the street. It was a preview of a much larger counter-rally scheduled for the space Saturday.

“We are at the forefront of every new social movement,” Speier said of San Francisco. “Hate will not infect us and become a cancer in this city. Love will win.”

By painting with broad brush all Americans who are not progressive or sufficiently “woke,” Democrats are actively encouraging a deeply unsettling and potentially dangerous level of unhinged hatred not toward the relatively small number of neo-Nazis and KKK members that do exist in this country but toward the majority of America’s population.

Those of us not associated with the KKK or neo-Nazis and who ejected these types from Tea Party events are simply labeled “white nationalist,” “alt-right,” and/or “white supremacist.”   As such, we are deemed walking “hate” and are lumped in with actual white supremacists; therefore, any false charge can be made and any degree of violence deemed necessary can be applied to suppress and silence us.  You know, as the antifa and assorted leftist lunatics spread the love.

The post-modern inversion of the truth is strong here.

THIS is where a civil rights lawsuit should be filed, and an injunction sought.

ALSO, the military should be activated to protect people in expressing their rights to expression and assembly.

Nanny may be immune from a defamation suit, but I’d look into that, too.

Yes, there should be enough to get as far as deposing her on why exactly she believed what she said to be true, and getting her to explain how this could be distinguished from reckless disregard of the truth.

You might not get anything useful from such a deposition, but it would be a hoot to watch.

Expecting truth from Pelosi is like looking for nutrition from a Twinkie.

The left will keep beating the racist and white supremacist drum as long as they think it’s working. Then it will be some other lie.

They never give up. Fighting them is a full time job for all of us. Or they win just because we are too tired to fight them anymore.

I would fully expect to get more nutrition from a Twinkie, than truth from Pelosi.

White Supremacist = bad guy, therefore the violent mob behavior of the Antifa goons is justified.
Because the Antifa only beat up the bad guys who really truly deserve a beating…

Civic leaders in San Francisco….repeatedly voiced concerns that the event organized by Patriot Prayer would lead to a clash with counter-demonstrators.

So, if the ‘counter-demonstrators’ planned to hold a rally, would the civic leaders want it canceled because they were concerned it would lead to a clash with Patriot Prayer?

GOP in response: “Yawn, whatever.”

Anything patriotic is now reflective of white supremacy.

That’s why the statues of Washington and Jefferson are next to fall.

And after that, the “racist, white supremacist” document, the United States Constitution. It was written by slave holders and assorted haters/white people, so it is invalid and insupportable. These people are chanting “no more USA,” their goal is clear.

And Rags is a prime example of that inversion.

Take a bow,Rags. You are the example of the #NeverTrumpers who make antifa violence and Democrat encouragement possible, acceptable, and unaccountable.

How is Rags an example, because he has unapproved opinions and freely expresses them? Would Anti-1A and the Democrats close up shop and stay home if you could just get all dissenting conservatives to STFUA?

#NeverTrumpers are what give the Democrats and Antifa boys cover to say “Even his own party hates Trump.” That directly encourages them in blocking Trump’s agenda he was elected to implement. If you can’t see that, I can’t help you.

I have to wonder if, on the road to losing your rationality, there were stops along the way where you questioned what was going on in your head?

By this twisted “thinking” when I criticized Barracula, I was creating the Alt-Right.

I guess it’s all my fault… (But, really, you are irrational.)

I’m amazed at how easy it is for these clowns to get their way.

Hitler and Stalin are wetting themselves from the grave with envy.

That word has no meaning at this stage. When it used to describe the effects of a storm or eclipse, essentially projecting the intent ONTO the event, then you know there is no thought behind it.

I remember when my kids were 4, 5 and 6. They would routinely yell disparaging names at their sibling (like poopey head) whenever they were frustrated. I’m finding it hard to find a difference with the silly and overwrought behavior from progressives currently.

By painting with broad brush all Americans who are not progressive or sufficiently “woke,”
I would say they forcing people to be woke is not what your average American will respond to. The progressives came to power on the “Hope and Change” and Obama never using terms like this and thus he was able to bamboozle voters. Reality has set in now on utopia and the public is learning when Utopia doesn’t arrive it can’t be blamed on the progressive leaders but instead must be blamed on the people in the country. That won’t go over and add on the fact they are trying to suppress free speech to discuss it and you have a formula for Democrats to have a majority of the country