Morning Joe: Trump Transcript Leak Could Be “A Set Up” by White House to Damage Press

Morning Joe: Trump Transcript Leak Could Be “A Set Up” by White House to Damage Press

Mika: “This is what Trump is Good at” 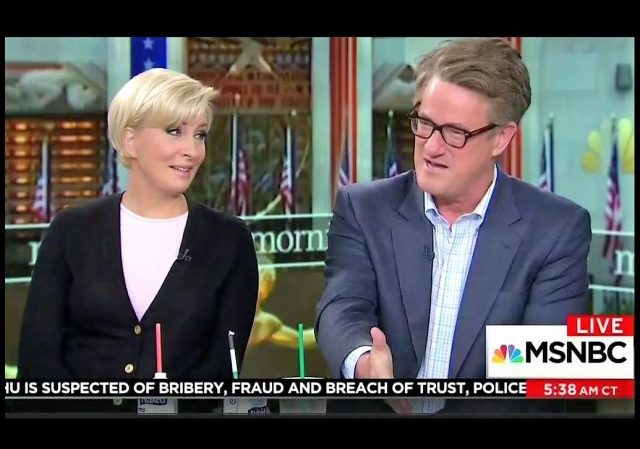 Joe Scarborough and Mika Brzezinski are suggesting that the Trump White House might be behind the leak of the transcripts of President Trump’s conversations with the leaders of Mexico and Australia.

On today’s Morning Joe, Joe and Mika floated the notion that while the leaks might have been mildly embarrassing to the president, they were “really damaging to the press.” In support of their theory on who was behind the leaking, the pair pointed to the fact that when the Washington Post informed the White House that they had the transcripts, Trump administration officials did not ask the paper not to publish them.

“It’s starting to smell a little bit here,” said Scarborough. Joe also repeatedly suggested that “we’ve been Nunesed.” That was a reference to the situation in which it has been alleged that the White House furnished Republican Rep. Devon Nunes with intel info that he in turn briefed President Trump on.

JOE SCARBOROUGH: Here’s the operating theory that we heard people talk about last night. And that —

JOE: Some might say that the fact that here you have this extraordinary leak that is supposedly damaging to the White House, and damaging to our allies —

MIKA: — but really is damaging to the press in some ways.

JOE: — but really is damaging to the press, because everybody came out yesterday going: this is a shock! You saw it on TV: this is a shock! Suddenly people started saying last night: wait a second. Did, did the Trump administration do a Nunes? Where Nunes announces: I’ve got this information and I’m going to tell the White House. But he had nothing so he went to the White House, the White House gave him information, and he came out and said: I’ve got this information! I don’t know — it’s starting to smell a little bit here.

JOE: It could be, like what happened, Clint [Watts], with Nunes. Where it was a set-up. And again, the most extraordinary thing that we learned from Greg Miller at the Washington Post was, everybody agrees on Capitol Hill and the media that this was extraordinary —

JOE: This was a leak, unprecedented, damaging, and yet the Washington Post —

JOE: The Washington Post went to the White House and said: what should we do? No push-back at all. Go ahead with it.

CLINT WATTS: You would at least give a response normally.

MIKA: You would at least say, please don’t release those private conversations. This is wrong.

JOE: Any White House, would they not, have fought this, hard?

MIKA: Unless, you wanted this to happen!

MIKA: Personally, I think this whole leak thing, where everyone was played, and this was actually orchestrated by the White House, some might say.

MIKA: This is what Trump is good at.

I hope it was a setup…an I hope they got who they wanted!

Proving to the American people that the Media will do anything to hurt Trump, even hurting America is just a bonus!

When I looked into the contents of this leak, I asked myself …

Did I hear about this before ?

This leak is old news, and the fact that the networks ran with it show just how short their memories are.

The WH doing something that could damage the press? Like I would need to do something to get a pile of manure to draw flies?

Funny how quickly the media ran with the story wasn’t it? Why, its almost as if the media isn’t actually checking anything in regards to the Trump Presidency and are just posting stuff willy nilly…without any controls or checks what so ever.

No surely not…our media wouldn’t do such a thing would they???

If there are different levels of ‘delusional’, they must be getting close to ‘peak delusional’.

Publishing those transcripts damages the Presidency, but they leaked them deliberately?

Biggest CYA move ever. Let’s publish some key leaks to damage the confidentiality of Trump’s conversations with others, and then blame Trump! That’s it.

MJ, you have no credibility. 100% spin 100% of the time. This is all part of the spinning. Not buying what you are selling.

The Lie-Stream Media is learning something?

Was the media coerced into publishing the transcripts against their will and better judgement? The devil made them do it.

Look how well our made up theory of Russia worked out so let’s make one up about these damaging leaks. Now how can we spin this so Trump will look bad? I know, we’ll say he is damaging our image! We’ll sue him for damages because every one looks to us for truth telling and……………

I was told that Trump was an incompetent buffoon. Have we moved on to the evil genius phase already?

Let’s see if Joe and his Mickey, or any of the Lie-Stream Media cover this.

Daiwa in reply to notamemberofanyorganizedpolicital. | August 4, 2017 at 12:17 pm

Congress needs to remove all the impediments to full-time employment they’ve managed to erect. There were (at least among some) good intentions but the law of unintended consequences is immutable.

Big project, but they need to tackle it. They have to unravel Obamacare somehow and scale back the OT rules, just for starters.

Most mentally ill people have their psychotic episodes on a small scale.
These two managed to have it on cable TV, with potentially hundreds of viewers.
There are medications that can help.

Reach out for help! People care!

Yes, Mika and Joe.
This is the stuff the Trump Administration is working on all day and night – ways to get back at the press…

Every time I hear or read anything from this duo I’m want to reach into the TV and slap the cr*p out of both of them.

This is what it’s like to have an adversary whose thinking is ten steps ahead of your own. Suck it.

The dumb blonds (but I repeat myself) is just now coming to grips with the fact that she’s been played. Joe better dump her…quick!