Jordan: I have “really tired of the Jared and Ivanka spin machine” 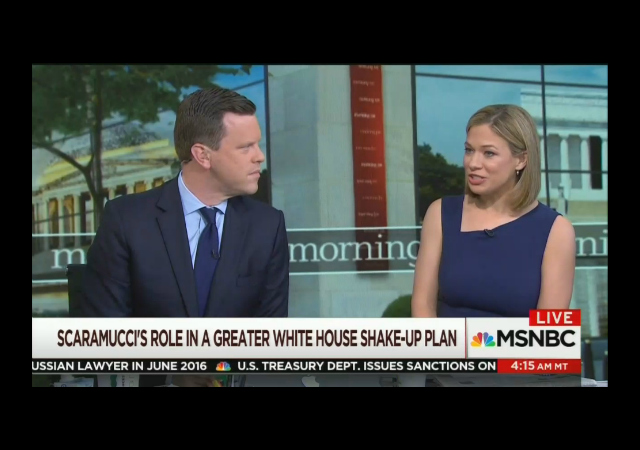 There are many vitriolic anti-Trump regulars on Morning Joe. Elise Jordan ranks right up there with the “best” of them. Interesting, considering that Jordan is a Republican, having worked for President George W. and on the Rand Paul campaign. Perhaps that explains it: bitter aftertaste from the primaries?

In June, as our friends over at NewsBusters noted, Jordan compared Trump to a “suicide bomber.” In July, Jordan tried to revive the discredited Russian “dossier” to use against the president.

This morning Jared and Ivanka Kushner were Jordan’s targets.

Jordan first mocked their “sterling political judgment” in having advocated bringing Mooch into the administration. Elise then launched a particularly nasty attack against Ivanka:

“I was really disgusted by Ivanka’s tweet today saying she looked forward to working alongside General Kelly. Alongside? Respect the chain of command in the White House. Respect someone who served half a century in the military. Maybe you could learn something.”

Jordan is a good example of the kind of Republican that MSNBC likes to feature: the sort that can’t stand Trump. Jordan takes the place on the Morning Joe panel of Nicolle Wallace, another Trump-detesting Republican who has since been given her own MSNBC show. And then there’s panel regular Rick Tyler, a former Cruz campaign aide, who rarely has a kind word for the president. Not to mention Steve Schmidt, a go-to guy for Trump criticism.

And of course Mika long ago banned Kellyanne Conway from the show. Even CNN has Jeffrey Lord. Can anyone think of a Morning Joe regular representing the Trump position on issues?

ELISE JORDAN: Oh, Jared and Ivanka! This was another example of their sterling political judgment.

I quite frankly have really tired of the Jared and Ivanka spin machine that is constantly trying to portray them as somehow all-powerful yet powerless. And they have so much control yet they have no control and can’t control anything.

JORDAN: And I was also really disgusted by Ivanka’s tweet yesterday, saying she looked forward to working alongside General Kelly. Alongside? Respect the chain of command in the White House. Respect someone who served for nearly a half a century in the military. Maybe you could learn something.

We’re really disgusted with Elise Jordan. So what?

I’m with Elise Jordan re: the sainted power couple who were never on the ballot.

Obama had his close group of advisors, who were not elected. I don’t remember much wailing from the MSM about Val Jarrett and other people.

I wonder if the problem is that MSM thought these two would be pushing Trump to the left and their favored positions and that does not seem to be happening fast enough for them.

Valerie Jarrett still lives with the Obama’s. what’s that about? She needs to be in their house, not 5 minutes away? She can’t afford her own place?

Elise Jordan is a blithering idiot.

Does that mean the peacock is homosexual?

What it means is that the GOP-e, centered on the Bush family and their apparatchiks, has always hated Trump even more than the Dem’s do, and will do anything to take him down.

Trump is the most serious threat to their ongoing profit opportunities they have ever seen, especially with that crazy “get rid of all of our cheap labor by cracking down on illegals” talk. The only plan they ever want to see for dealing with illegals is Amnesty for All.

They’ll do anything they can to get rid of him.

The famous peacock is a color test pattern.

When you see a rainbow, do you automatically think, “Ooohh, how gay!” ?

LOL! When you say gay, do you mean happy?

Unfortunately, the rainbow color spectrum has been co-opted by a small demographic. I loathe anything with rainbows now, because of it.

(Jordan’ comment on Ivanka) “Alongside? Respect the chain of command in the White House.”

Um. Jordan? She’s the President’s wife. She’s not *in* the chain of command, quite unlike Clinton, who thought she was and rammed her nose in everywhere she could. Ivanka will be working *alongside* the new chief of staff, just like she said, not over, not under, but beside.

We now resume your normal left-wing rant from MSNBC, already in progress…

I agree with the thrust of your comment, but let’s note that Jordan was talking about Ivanka, not Melania.

of course you are right, Melania is not obviously being political.
Ivana may and probably does talk with DJT about issues of the day, but as most European wives, does not criticize DJT in public and there seems not to be many leaks stating otherwise.

Last I heard, neither Ivanka nor Jared were Trump. Aren’t we allowed to criticize Trump’s newspaper boy?

This isn’t exactly an innovation; the Mika and Joe Show is already thick with Republicans. Starting with Joe himself.

Chowhound is NOT a Republican any longer (if he ever was one).

OK, the one thing we know without a doubt is that MSNBC despises the Trump administration. Each day we get another Trump hater to spew their extreme hate. If you are a republican on MSNBC you hate Trump. And the democrats… well I don’t have to say anything about that. The left has gone full bore bonkers and it show’s every day.

Frankly this is getting old after 6 months. The same old hate game from the wacky left.

Trump is president Morning Joe, deal with it!

one additional comment, Ivanka is the First Daughter and advisor.
COS Kelly speaks for POTUS and Fathers speak with their daughters, hopefully.

I don’t understand this site’s fixation with Morning Joe. Who gives a hoot in hell what people on that show say or think? Why elevate the importance of the show by constantly blogging on it here?

I think someone may have a quota of blog posts to meet, and watching this stupid show and commenting on it is the easiest way to meet it.

I am surprised that Elise dislikes them so much. They’re liberals! They should adore those two at NBC/MSNBC? I actually don’t trust either one because they are liberals.