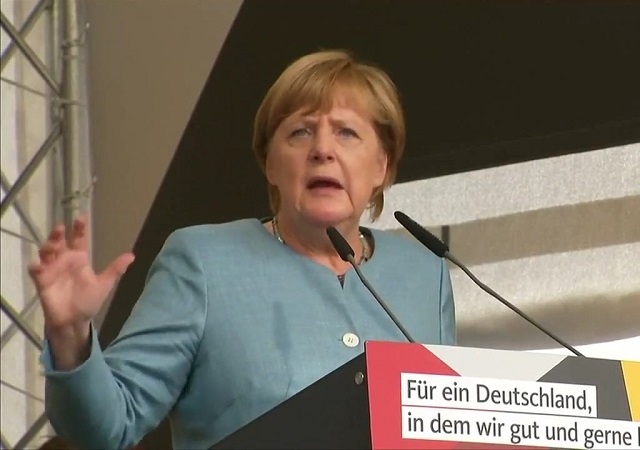 Just weeks until the September election, Merkel government is threatening “legal measures” against large German companies that fail to implement a ‘gender quota’ by putting more women on their executive boards. In what could simply be cheap antics to garner votes from women, the Merkel government is waging a war against “male-dominated” corporate boardrooms.

Germany’s Women’s Affairs Minister Katarina Barley has “threatened legal measures if the firms fail to fix the problem within the year,” German public broadcaster Deutsche Welle reported on Wednesday. The Women’s Affairs Minister presented a report on the “Corporate Gender Imbalance” to the Merkel-led cabinet this week. According to the report, large German companies had 27.3 percent of women on their supervisory boards. This still isn’t good enough for the Merkel government. The State wants large companies to allocate more than 30 percent of seats on their boards to women.

[Women’s Affairs Minister] Barley put the German companies on notice in an interview published on Wednesday, slamming them for having too few female executives.

“I’ll give businesses one more year to take care of the issue themselves. If nothing has happened by then, we’ll have to intervene,” she added.

Women still make up only 6.5 percent of executive boards in 106 largest German businesses, according to economics think tank DIW.

Since 2016, over one hundred largest German companies are obligated to have at least 30 percent of women on their supervisory boards. However, German lawmakers have not yet introduced such a quota for the executive boards, which include all executive directors and the company head.

Despite the last-minute window dressing by Merkel and her coalition partners to win over women voters ahead of the September 24 vote, the Merkel-led government has failed to address the issues of safety and wellbeing of women in Germany.

Thanks to Merkel’s open door policy for illegal migrants from Arab and Muslim lands, child brides are on the rise in the country. Government figures put the number of child brides at 1,475, out of which 361 are under the age of 14. Instead of calling for ‘legal measures’, as the Merkel government did in dealing with the private firms, Germany’s Justice Minister Heiko Maas proposed a ‘culturally sensitive’ law that aimed to recognise child marriages in Germany.

According to the proposed migrant-friendly law, German newspaper Bild Zeitung concluded that “a 13-year-old child bride would have to testify against her husband, saying that her well-being as a child is under threat. If neither the child nor the Child Welfare Service lodges a complaint, for all practical purposes the marriage would be declared legitimate.” The law didn’t take into account the possibility of coercion, let alone the very real prospect of ‘honour’ killing prevalent in Europe’s migrant community.

The perpetrators of mass-sexual attacks, in Cologne and other German cities on the New Year’s Eve of 2015/2016, have largely gone unpunished. In Cologne alone thousands of migrant men — exclusively from Arab and Muslim countries — raped, robbed and assaulted at least 1,200 women. According to the government’s own admission, most of those attackers have managed to walked free.

The Interior Minister of North Rhine-Westphalia, where Cologne is located, admitted earlier this year that “most of the cases [of rape and sexual assault in Cologne] will remain unsolved.”

According to the Germany’s Federal Crime Bureau (BKA), there is more than 50 percent rise in migrant crimes compared to the figures of last year:

These new entrants make up less than 2 percent of the German population, but constitute 9 percent of Germany’s criminal population. They not only indulge in petty crime but have come to dominate serious and violent crime in Germany. Nearly 15 percent of all suspects charged with serious bodily harm, rapes and sexual assaults come from this group, the police crime report reveals. [Gatestone Institute, May 2017]

This crime wave has been accompanied by a string of terror attacks committed by illegal immigrants with Islamist affiliations that have rocked major European cities, including Berlin, where a Tunisian ‘refugee’ drove a truck loaded with 20 tons of steel beams into a busy Christmas market, killing 12 shoppers and injuring 48 others.

The barbaric practice of their female genitals mutilated is also on the rise. A recent report published by the women’s group Terre des Femmes claims that the mass-migration is driving the practice of genitals mutilation among women and minor girls in Germany. The number of victims could be as high as 58,000. Additionally, 13,000 minor girls were at the risk of undergoing the genital mutilation — a practice forbidden in Germany.

Merkel government worrying about the plight of women in higher echelons of German economy can hardly be taken seriously. If Merkel really cared about the life and safety of women in the country, she would be securing the borders.

Given the difference in preferences and interests, are you going to also force women who don’t want to do these jobs to take them in the name of equality?

When I look at “Progressive” women like Merkel with no kids and nothing feminine about her, I kinda wonder what the difference would be between her and a man on the board.

On an even more ironic note, Western governments have moved out of your bedroom and into your boardroom…

notamemberofanyorganizedpolicital in reply to buckeyeminuteman. | August 17, 2017 at 4:03 pm

The German federal government and the various German states maintain large shareholder positions in some of Germany’s largest corporations. As in the US, it is shareholders who vote for the directors who sit on the board. Board seats cannot be allocated. Where cumulative voting is allowed, a 1/3 ownership can control the company. All Merkel can do is ensure that government shareholder interest nominate and vote for female candidates, unless she also plans to enact greater national control, short of outright nationalization, over corporations.

It’s like the “talented tenth” strategy for blacks in the United States, espoused by the communist W. E. B. DuBois. It causes hatred all around, whites complain justifiably about affirmative action quotas and hate blacks, meanwhile most blacks get no benefit from it, only that “talented tenth” on whom the benefits are laid liberally and endlessly. It causes numerous cracks and tensions in society.

Now they’re going for to inflame male-female and rich-poor divides, meanwhile the Muslims are admitted to take full advantage of every weakness.

“Divide and Conquer” ought to be the Left’s new campaign slogan.

On the 9th day of tug-a-war with my not really that smart phone came the stark realization that it is not infested with gremlins, it is not Skynet trolling for kicks before exterminating the human race, it is not distracted by that flirty NASA probe orbiting Saturn.

No. My smart phone makes even the Three Stooges facepalm because it’s creator’s company is run by Social Justice Warriors who would set their car on fire trying to change a flat.

This is how civilizations fall. We are forgetting how to make things that don’t need a warranty 6 months after purchase.

SJW: “But it has electrolytes. It’s what plants crave’.

Yes, look how well putting a woman in charge of the country has worked.

As a woman, would you rather your government give you a diversity quota or protect you from Muslim gang rape squads.

I no longer understand these people. I may have to give the Reptilian Overlord theory a second look.

If you object on social media you risk being banned by Google, Youtube, Twitter, Facebook, etc and additionally may be visited by the police and prosecuted.

It isn’t in my experience that no woman wants the job but that the system of promoting women based on being women instead of merit breaks down the quality as one goes higher in merit system. By the time you get to the top management positions you have a handful of men who worked 80 weeks for years being compared to women who were excused from this as they went from entry level to middle management and then above. You then have very different skill levels to be the top manager and it is reflected in the ratio of women to men. I would explain it if you had to have 3 woman on a football team in high school how good would those three women be if they were the required ones at the NFL level? The would just be token job holders who were put where they had the least effect and then the best of these that developed no skills being untested would be promoted more above their head and the process worsens.

Merkel: An once of image is worth a pound of performance.

Merkel is returning German to its Fascist roots it seems.

Looks like reasons for Dagnar Danneskjöld to take to the seas are progressing unabated.