Melania Trump’s Office Lashes Out at Criticism Over Her Stilettos

Melania Trump’s Office Lashes Out at Criticism Over Her Stilettos

Give me a break…… 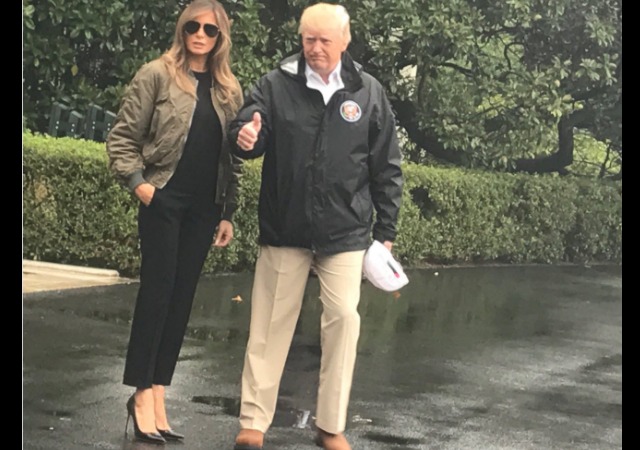 STOP THE PRESSES!!!! First Lady Melania Trump had the NERVE to wear stilettos as she boarded Air Force One to head to Texas with President Donald Trump.

The way people acted you’d think she’s the one who ordered Hurricane Harvey to devastate the Gulf Coast of Texas.

“It’s sad that we have an active and ongoing natural disaster in Texas, and people are worried about her shoes,” the first lady’s Communications Director Stephanie Grisham told Fox News via email.

I posted the pictures and someone told me that the last thing people in Houston want to see is a billionaire’s wife in f*ck me heels. As someone who has gone through hurricanes and tropical storms in Texas and tornadoes in Oklahoma, when you’ve lost everything, the last thing you care about are the shoes the First Lady is wearing.

You care about one thing: SURVIVAL.

Our very own Kemberlee is in the storm and I can pretty much guarantee she doesn’t care about Melania’s shoes. I’d ask, but she has lost power and I don’t want to text her and use up any of her phone battery.

Nicole Gallucci at Mashable took the words right out of my mouth:

But alas, the stupid unleashed their stupidity:

And forgive me but gotta say it: Dear Melania, wearing those shoes is like saying to Houston “Let them eat cake.”

Melania taking off for Houston on AF1…in stilettos.

And here we have Melania Trump modeling what NOT to wear to a hurricane: 5-inch stilettos.

How out of touch can you be? pic.twitter.com/tZR8o3dYxY

Melania headed to a disaster zone in stilettos is my Halloween costume. pic.twitter.com/BWhUSKWVQ8

Thank God some had common sense:

Team, the Trumps aren’t going to Houston so it doesn’t matter what heels FLOTUS wears. Also she can always change on AF1. https://t.co/3su0YpK4Ck

Anyone talking about Melania’s shoes has clearly never been to Russia or Eastern Europe in the winter get over it ????

There’s a ton of legitimate shit worthy of outrage right now. The shoes that Melania Trump wears on a flight to Texas isn’t one of them.

Maybe policing the clothing choices of a woman in politics ISN’T the way we want to go as feminists or progressives. Just a thought.

OK everyone, look.
Melania Trump is capable of changing her shoes.
Can we stop now?

Yes, Melania Trump can change shoes, but did SHE change her shoes or did she have a starving Ethiopian child change them then have the child thrown down the trash chute of AF1?

Fake news isn’t just false news; it is stuff that really isn’t “news” at all.

This is incredible! When she arrived in Houston she was wearing a white top and tennis shoes. Is she not allowed to get on the plane and change? This is what social media is doing to America. We are now a nation of idiot gossips who have not one ounce of gray matter!

Our society has gray matter but it is mushy and lacks any fortitude whatsoever. A mind is a terrible thing to waste, and it’s there for the wasting, which is somehow even more tragic.

She is too hot to be a First Lady.

Let me get this straight, they chewed her out for wearing shoes before boarding the plane, located nowhere near Texas?

That is correct. She boarded Marine One with the shoes which departed to Andrews Air Force Base and from there she boarded Air Force One to take a flight to Corpus Christi International, a 5 hour flight.

Based on media logic, there was absolutely NO TIME whatsoever for Melania to change in flight.

I’ve run out of ways to express how idiotic the press/left have become. So from now on, my standard response will be:

I believe the only proper and traditional reply is, “Someone with no life.”

You may want to check your testosterone level.

The leftist men probably lust for her. (Probably can say the same thing for the leftist women, like dykes on bikes – though Melania doesn’t go for bigots.)

Imagine if michelle obama wore those? She probably fall through the center of the earth, and emerge in China.

Hmmmm, lemme get this straight:

The Democratic mayor of Houston looks a large, wet, slow-moving hurricane in the eye and not only fails to implement the evacuation plan that was already on the shelf, but encourages the populace to stay in place, and furthermore refuses to take the governor’s calls, and all the press can talk about is the shoes the First Lady wore in Washington?

There’s actually a lot of news that could be coming from Houston, including injury and sorrow and loss and narrow escapes and heroism and human kindness, but our national press is shallow and lacks good will.

Meanwhile, it is still raining. The storm is not even over, yet. The water will continue to rise.

She rocks it! The USA has a beautiful, well educated, first lady. She even looks great in the white tennis shoes that she switched out to during the flight.

There is a word for the critics of the Beautiful First Lady: MEOW!

Excuse me, but didn’t people come under heavy criticism for negative comments about Michelle Obama’s wardrobe choices? Her choices had nothing whatever to do with administration policy. Nor do Melania’s. And didn’t someone lose her job for a mild comment about the Obama daughters’ demeanor and attire at a White House event? If Melania wore flats no doubt they would say she was doing it to make her husband look taller.

Liberal feministas criticizing a woman about the shoes she is wearing. Oh the irony.

I’m just proud to have a President and First Lady that can handle their own umbrellas.

oboy. This is the person criticizing Melania’s shoes.

Fer real. Somebody went and double-checked.

For anyone that thinks this is a troll, it’s not.
This is her page on Vogue: http://www.vogue.com/contributor/lynn-yaeger
There’s a picture of her in the upper left corner of the page.
You can also see an entire compilation of her pictures:
https://duckduckgo.com/?q=lynn+yaeger+vogue&t=ffsb&iax=1&ia=images

I am officially appalled.