No way to win… 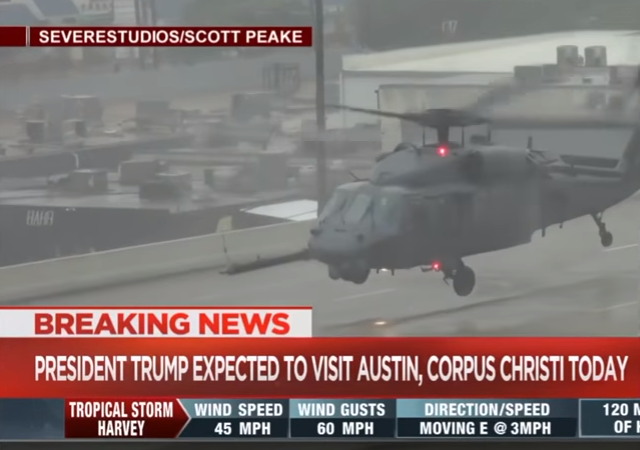 In the aftermath of Hurricane Katrina, Democrats and their many media allies successfully created an unfair narrative which blamed George W. Bush for acting too slowly.

When it became clear this week that President Trump planned to act quickly in the wake of Hurricane Harvey, they tried to make that the new narrative.

No Shame: MSNBC Whines That Trump Is Going to Texas Too Quickly

Proving they are the opposition party, journalists completely switched complaints when it comes to the subject of Republican presidents and Hurricanes. While reporters spun George W. Bush as callously staying away from Hurricane Katrina, MSNBC’s Katy Turn on Monday whined about Hurricane Harvey: “[Donald Trump is] going to Texas tomorrow and there’s real concern that his going there is going to have to divert, at least a little bit, some resources away from the rescue effort and toward him.”

Talking to ex-Congressman Tom Davis, she chided, “The President is going to Corpus Christi and he will be diverting at the very least some resources away from them. There’s an ongoing search and rescue effort underway in Houston and the other areas that have been devastated so far by these floods that could only intensify and get worse by tomorrow. Do you think it’s the right thing to go?”

On CBS News, Bernie Sanders was pressed repeatedly to say Trump was going to Texas too soon. Jack Heretik reported at the Washington Free Beacon:

The hosts of “CBS This Morning” on Tuesday pushed Sen. Bernie Sanders (I., Vt.) to criticize President Donald Trump’s visit to Texas in the wake of Hurricane Harvey, a critique Sanders was reluctant to make.

Gayle King was the first to ask Sanders if it was a good idea for Trump to visit. Sanders said “I don’t know” as he fumbled over his words.

“Well, there’s one school of thought—they’re still in the middle of it,” King interjected…

“Is it too soon for a presidential visit?” co-host Maurice DuBois again asked.

If you watch the video below, you can see even Sanders was uncomfortable with this line of questioning:

These were not isolated incidents. David Rutz, also of the Free Beacon, created this compilation which includes other examples:

The liberal media is playing a political game with this tragedy and they’re doing their best to make sure Trump can’t win no matter what he does. It is further proof that they have learned nothing since the election.

The media is like a harridan just before the husband kicks her out. She nags and criticizes and he can never do anything right. It’s time for a divorce.

Exactly. If Trump’s plane would have touched down 1 hour later, the media narrative would have been “Trump arrives too late!!!”

notamemberofanyorganizedpolicital in reply to Tom Servo. | August 30, 2017 at 7:56 pm

“CNN Called Out By Distraught Flood Victim For “Vulture Journalism”…

“Narrative Engineering – This is what happens when you put arrogant and condescending Jim Acosta at the CNN media desk and tell production journalists to stimulate and capture the highest level possible of ramped-up anxiety. Why do this? Simply to push a crisis agenda, lead news with stories of desperation and create toxic narrative, that’s why.

One distraught Houston flood victim has enough, and righteously calls out CNN for their “vulture journalism”. Watch…”

They did this during the primaries and the campaigngn. It’s a big factor in why DJT won.

The media is way to self important. NO ones cares what they happen to be babbling about. Every time they play fast and loose they play right into President Trump’s hand!

Everyone knows it does not matter when or what Trump did it would be wrong according to our lying friends in the media!

No surprises. The “reporting” is based on the narrative. Facts have no standing except for those selected to support the narrative.

We need to stop pretending the MSM is about news which is their mask. The MSM has a mission and it is propaganda.

Up next: Trump Visits Devastated Houston – Leaves Too Soon

notamemberofanyorganizedpolicital in reply to Tom Servo. | August 30, 2017 at 7:59 pm

If now and there isn’t the time and place to wear high heels, then just cut the MSM off completely!

Plus, this morning I saw an ABC News headline saying Trump spoke to emergency responders but not enough to flood victims. No matter what he says or does, they will find some way to criticize.

God bless the lady who put CNN in it’s place.

notamemberofanyorganizedpolicital in reply to tarheelkate. | August 30, 2017 at 8:01 pm

I was trained as a journalist and spent 30 years in media. We were taught to report facts, not opinions. The narrative should be Trump visits flood victims — period.

Unfortunately, the unbiased media (if it ever truly existed) has long departed. These days, I question every report and try to sift through the spin to get the facts. It’s not easy.

Navyvet, I’m right there with you. Was in the newspaper business for 30 years and can’t believe how today’s “journalists” have abandoned all ethical and professional standards in reporting. No facts unless it advances the narrative. Makes me sick and sad! Like you, I check and cross check everything to try to minimize the spin.

The IMPORTANT issue is:

How can the Wall be built without Harvey being used as a tool to derail it?

Trump should reverse the narrative to point out the hypocrisy.
At the next press conference, pick a prominent reporter and when they ask what is Trump doing about Houston, ask them what *they* have done – have they donated anything to the Red Cross or other charities?

I used to do this all the time with paid telemarketers calling to ask for a donation. Most were too stunned to answer.

Now, to do this, Trump should quietly give something to the Red Cross and not crow about it. So if they ask him, he can say he did give. My bet is that the reporters think Houston should be rebuilt with other people’s money.

And I don’t think this necessarily opens the door for them to ask about his tax forms. He can bypass this, and look in the camera and ask the American people to give generously, especially the media.

PDT will never win with these idiots.

The President wins every time the media fails to report the truth.

It must be exhausting being so angry and bitter. I almost feel sorry for them. Almost.

If they were being chased by pissed off Grizzly bears, I’d feel sorry for the bears.

I thought the new narrative was that he wasn’t empathetic enough.

“He got here too soon” is the new narrative!!!

Tomorrow, there will be another narrative…
Ah…”Trump didn’t take his hat off during the press conference”