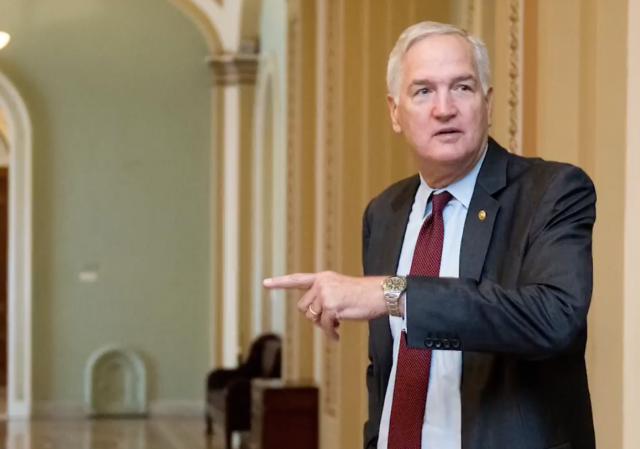 Welcome to our live blog of Alabama’s special Senate election primary. Our site doesn’t auto-update, so be sure to refresh for the latest. Newest info will be up top.

Strange and Moore will head to a runoff:

Moore had 41 percent of the vote and Strange — who was backed by Trump and McConnell — had 32 percent when the Associated Press called the race. Rep. Mo Brooks trailed at 20 percent. Alabama election laws call for the top two primary finishers to compete in a runoff if no candidate gets a majority.

The runoff is scheduled for September 26.

If you’re just jumping into this election, here’s a good primer

There are nine Republicans running in the primary, but three candidates have drawn the lionshare of attention. Incumbent Luther Strange has been endorsed by Senate Majority Leader McConnell and President Trump.

Luther Strange of the Great State of Alabama has my endorsement. He is strong on Border & Wall, the military, tax cuts & law enforcement.

After weeks of ads, mostly on behalf of incumbent Senator Luther Strange, the votes start rolling in tonight after 8pm EDT. Strange faces strong competition from former Alabama Supreme Court Chief Justice Roy Moore, who has led him in the polling average by about 5-6 points, and from Huntsville Congressman Mo Brooks, who has trailed Strange in the average by a little over the same margin. If polling is correct, Strange and Moore will advance to the September 26th runoff. We anticipate the first results will roll in within thirty minutes of polls closing. We’ll have comparison charts and a county-by-county display above as those numbers roll in.

Voter turnout had been projected to be about 20-25% of eligible voters. (It was 38% for the presidential election.) The Alabama Secretary of State John Merrill has said it might be lower, in the 10-15% range.

I just find the endorsement by Mr. Establishment of the McConnell voter Strange….

Yes, but it answers the question ‘could there be a moore strange runoff?’

Stick it to Mr. Establishment and McConnell…!!!

What a pity Brooks is out. I guess the only person left to cheer for is Moore, who will at least provide entertainment value. I’m not a fan of his, but he sure makes all the right heads explode.

I agree – it seems that often in these 3 way primary races, the candidate that I think is by far the best man (or women) for the job ends up placing third.

What makes me nervous about Moore is that if he’s elected, the entire gay marriage fight comes back with a vengeance. Having fought that fight and lost convincingly, I hate to see it opened back up again.

How could we lose any worse than we did? And SCOTUS is getting better now. Might be worth reopening. We have to protect Christian bakers who don’t want to bake them wedding cakes, and other obvious things that are current travesties.

Yeah, if nothing else he will provide entertainment value. He wouldn’t have been my choice but since I don’t live in Alabama, its up to them to decide who they want.

I am glad Brooks is out. His idea to push out McConnell would have been a big mistake. McConnell may not be the flashiest or most effective, but he is loyal to Trump’s agenda. Don’t want to risk that, don’t trust someone who would.

“Strange and Moore will head to a runoff:”

Best headline of the week.

If white privilege really does exist, then Roy Moore must get Michael Moore’s endorsement, right?