Sponsored by the SEIU!

Anti-Israel, Sharia law loving activist Linda Sarsour sparked outrage after she asked her followers on Twitter to donate to help Hurricane Harvey victims, but the link takes you to a political activist group. 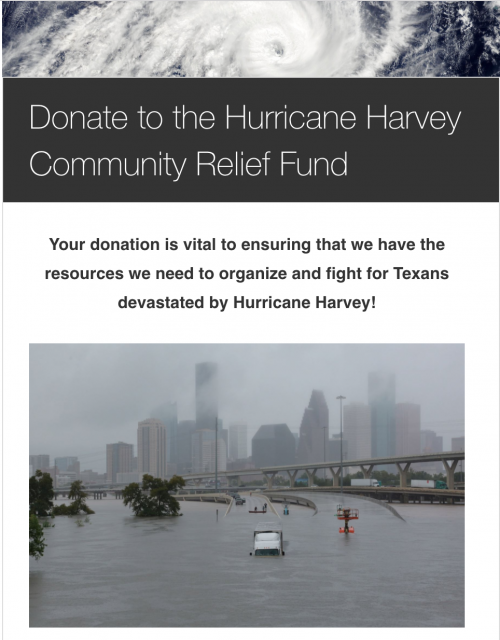 It looks innocent enough, right? But here’s the print underneath: 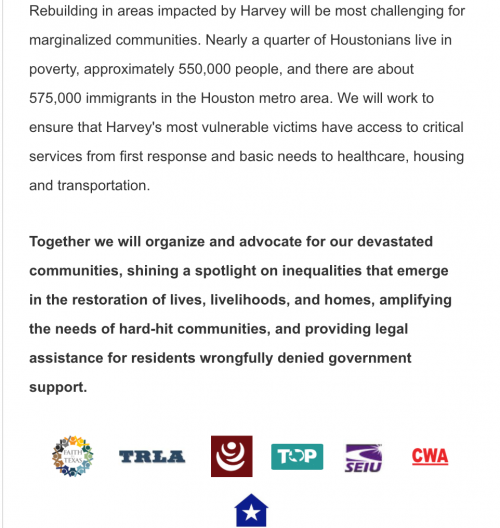 It doesn’t sound very much like relief, does it? Especially in the second paragraph, which is littered with references to political organizing. That’s because TOP is a political activist group:

The Texas Organizing Project (TOP) works to improve the lives of low-income and working class Texas families through community organizing, and civic and electoral engagement. TOP is a membership-based organization that conducts direct action organizing, grassroots lobbying and electoral organizing led by working families in Texas.

In addition, we provide training, leadership development, and public education, putting community organizers on the ground in working communities throughout the state. These organizers identify issues of common concern; recruit, develop and train leaders; and build partnerships with community, labor and policy groups to strengthen neighborhoods across the state of Texas.

With every campaign we run, every issue we fight for and every neighborhood we organize, we focus on creating effective ways to ensure that voices of low income and minority communities are not only heard, but that they have sufficient power to advance their issues.

Look at the groups at the bottom of the picture. Anyone shocked? Yeah, me either. Not shocked at all to see SEIU, Texas Rio Grande Legal Aide, Communications Workers of America, and Faith in Texas listed as sponsors…all left-wing groups and unions.

LawNewz reached out to TOP in order to clarify–and break down exactly–where funds raised for the Hurricane Harvey Community Relief Fund are headed, but a full response was not received at the time of publication. This post will be updated as soon as TOP replies. A request to Ms. Sarsour was not answered either.

Sarsour insisted that she didn’t mislead anyone, even though the way she worded her tweet, any sane person would think she meant immediate humanitarian aid…which is exactly what Houston needs right now.

People immediately caught onto the scheme and realized that the tweet does mislead people, tricking them to donate to raise awareness:

This is a political PAC not #Harvey relief. You’re literally stealing money from these people.

This is really quite ghoulish. Even for Linda Sarsour, who is not known for her moral probity. https://t.co/l47A9ztNN4

.@lsarsour You’re raising money for a PAC under the guise of “hurricane relief.” You’re a FRAUD (but that’s old news) pic.twitter.com/5yq98KdQzb

The people in Texas need actual relief, NOT political organizing. Here are some ways you can actually give humanitarian aid:

This is low… even below the left’s usual basement level standards.

1. She can’t be deported, no matter what she does. This is every bit as much her country as it is yours. Maybe you should be deported.

2. I don’t believe naturalization can be conditioned on future events. The constitution explicitly requires equal protection of the laws for all citizens, whether natural or naturalized.

3. Even if such conditions could be imposed on naturalization, their native-born children are citizens by right, just like you, and nothing but a constitutional amendment can ever change that.

Which brings us to the issue of birthright citizenship. We need to block the anchor baby loophole by requiring at least one parent to be a citizen.

Both of your proposals are explicitly banned by the constitution. You’d need to pass amendments, and it’s impossible to do so without bipartisan support (it’s difficult even with that). Therefore not happening.

1) I guess that capital punishment will be necessary:) Perhaps for treason?

This is one of those moments when DC Republicans should be on the capitol steps denouncing a democratic party fraudster. But nope. Cuck John McCain is fetching ‘dossiers’ for democrat party cutouts.

And, not to put too many dots together, but isn’t “tiki” suggestive of “Tiki torch”?

You can disclaim this, of course. But you are on the radar here.

Radar for who exactly? Has this site ever even banned anyone?

I can recall at least one.

Ah, the spirit of AntiFA, right here on LI.

There are always vultures who are drawn to crisis.

Make wise choices about where your help goes.

Scum like Sarsour will always be with us. Like bad weather. No reason to get worked up about it.

I’m shocked that a terrorist-loving piece of shit would do this.
No, wait. I’m not.

Everything about this Sarsour character is despicable.

Yeah Linda, it’s only the “alt-right” that thinks you’re a fraud.

Media outrage at Dems not condemning her fast enough, and clear enough, and with no caveats in 3.. 2..

Leftists often favor “advocacy” rather than really helping anyone.

That’s just not really true, is it? Just look how the Clinton’s help Haiti in their hour of need! They raised millions of dollars to help that poor depressed nation. The left always rise’s to the occasion; every disaster presents a new opportunity for the left to ‘help’!

She’s a natural born American so we cannot deport her, and she’s got no shame, so shaming her is ineffective. Perhaps her tweet will turn out to be actionable fraud? God I hope so.

Thanks Comrade Bernie….the red cross may not be perfect but as with any very large charity it will have to spend money to support the weight of its massive infrastructure. If you don’t think charities should get large, then don’t donate…that’s free market forces at work.

CEOs get paid a lot to hold big entities together…tired of the BS, if you have criminal fraudulent activity to report, that’s different. If it’s the internet taking pot shots again, the internet can go eff themselves.

In terms of the percentage of your donation that actually goes toward relief (versus the percentage that goes toward administrative costs), there are other charities that do better in this regard than ARC. (This is not to deny the legitimacy of administrative costs – merely saying that some orgs do a better job at keeping the lid on expenses than others.) That’s why we donated to Samaritan’s Purse. I’ve also heard that the Salvation Army is good about this aspect as well.

Nothing wrong with trying to stretch your donation dollar as far as possible.

Oh I agree with that part completely and, in some cases, bloat of a large organization may be a problem, which is why an informed charitable donor should vote with their dollar, as you have suggested.

Disclosure is key, and the Red Cross does disclose how their money is spent just like every other non-profit.

I just dislike the invoking of “CEOs and their inflated salaries”; it reeks of Bernie bro-like attitude to me.

A quick search of Grassley’s beef with RC mentioned that they spent 25% of Haiti relief funds on admin costs. While not great, the article I read from NPR had to of course try to make this sound bigger by given the dollar figure of 125 million. This is, of course, misleading because the percentage going to actual relief and that dollar figure are notoriously absent (because they would counteract the author’s argument).

In contrast, the key benefactors of the “ice bucket challenge”, the ALS foundation, spend roughly the same percentage (at 22%) of their revenue on administrative expenses. The dollar figure is only around 2.2 million but that’s because they are a much smaller organization.

In other words, this is not abnormal charity behavior; it’s just the flavor of the week (or last week in this case) gripe by the media and internet.

The comment on their site…”We have an ironclad commitment that 100 percent of the money raised into this fund will be spent directly on ensuring low income and people of color are not forgotten in the relief, recovery and reconstruction efforts. Not a dime will be spent on any other purpose.”

So a donation is race based? Nothing like continuing the race issues.

Organizations soliciting funds under the guise of hurricane relief, only to provide no actual hurricane relief, are frauds and should be prosecuted to the extent of the law. Should no law exist, that can be remedied rapidly in the current environment.

They are providing relief (or so they claim), they’re just not providing it to everybody.

The Texas Governor said he will be actively prosecuting people for looting and say perpetrators will be dealt with harshly. This is simply a different type of looting. This is fraud and should also be prosecuted.

Sarsour showed up on the news a few weeks back and a 4-letter word I feel ashamed of even using slipped out of my mouth in anger. The way my wife looked at me immediately afterwards, I braced for a well-deserved slap which didn’t actually come. Boy was she hot though. I explained to her that’s the same way I feel when I see Sarsour’s face.

The headscarf is getting tighter, the makeup is getting heavier, the hubris is getting greater – and the likelihood of Sarsourpuss joining hurrican Kartrin’s New Orleans mayor Ray Nagin in prison increases:

When is Hillary Clinton being indicted?

And where is AG Sessions?

And where is Ed. Secy De Vos?

Only 37 percent of U.S. 12th graders were prepared for college-level coursework in mathematics and reading in 2016, but many public school districts have become fixated on the latest progressive trend of “social and emotional learning.”
http://www.breitbart.com/big-government/2017/09/02/back-school-students-primed-social-emotional-learning-failing-math-reading/