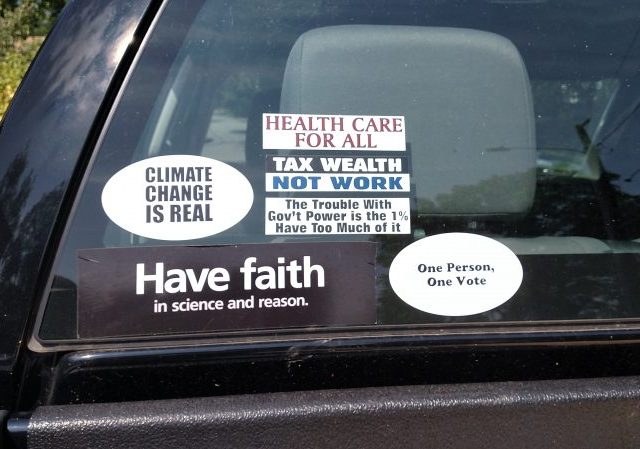 Not Ithaca, this time, Rhode Island. 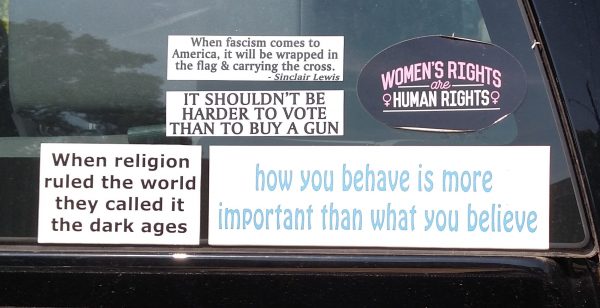 It would be if it were in New Mexico.

HAVE FAITH in science and reason.

Proving that science IS god to leftists. Separation of church and state? …..riiiiight.

Also love the irony of “One Person, One Vote” and the statement “IT SHOULD’NT BE HARDER TO VOTE THAN TO BUY A GUN.” What happened to “Vote early, vote often”?! #2A

And, in the light of BLM and the so-called anti-fa (i.e. REAL fascists with an Orwellian name) engaging in violence and mayhem, this is evidence of true delusion: “how you behave is more important than what you believe”. Are they kidding?! Delusional is the only word for it!! The “anti-fa” and BLM are purely belief-driven; their behavior follows.

I think the god is “scientism” based on the theological foundations of philosophical naturalism and Marxism. Narratives are the “truths” and all challenges to the dogma must be silenced.

It seems to be a modern version of Lysenkoism where heretics and facts will be purged. Political beliefs were and now are the test. The results were and will not be pretty.

truth is that ‘science’ is NEVER settled unless it can be replicated by experimentation – all othrtd are ‘THEORIES’.

Climate change is real…yes it is, just not caused by humans and taxing us won’t make it cooler

Healthcare for all…already have that here.

The trouble with Gov’t power is the 1% have to much of it…are you talking about the Demoncrats?

Tax Wealth not Work…Wealth comes from work, it wasn’t stolen(not in America)!

When religion ruled the world it was called the dark ages…religion rules the 21 century and has for a very long time!

One person on vote…Sorry, it’s one citizen one vote!

Have FAITH in science and reason…because of course science has always got it right, until they were wrong and had to be dragged kicking and screaming to the truth!

It shouldn’t be harder to vote than buy a gun…actually they should be exactly the same!

How you behave is more important than what you believe…Oh crap you got something right! (Applause) see: BLM, Antifa

“how you behave is more important than what you believe”

??? – I was always taught to act after the manner of my beliefs.

It shouldn’t be harder to vote than buy a gun

It isn’t. You need an ID to buy a gun (not to mention a background check).

Where is the “COEXIST” sticker?

That is so last decade. We’re not supposed to coexist with wrongthinkers anymore.

At least they didn’t put all of those dumb stickers on the paint.

The irony, of course, is that we probably all agree with the sentiments in most of those bumper stickers. (Sinclair Lewis is the one I would exclude.)

We just don’t agree with what the driver probably *means* by those sentiments.

Example: “How you behave is more important than what you believe.” Yep. Condemn hatred and violence from many sides, rather than trying to parse the stated beliefs of the different groups of violent extremists. But I doubt the driver of that car would agree.

When religion ruled the world it was called the dark ages

2. The term “dark ages” refers to the lack of information about it, not to how things were then. They’re “dark” like the “dark side of the moon”, which is in fact no darker than the other side, but it’s dark to us because we can’t see it. The whole point of the lack of information thing is that we don’t know how things were in the “dark ages”. People might have been deliriously happy and prosperous, but they didn’t write about it, at least not on media that survived, so back when history relied almost exclusively on written accounts historians named that period “dark”. But in recent decades, as more information about the era has come to light, the term has fallen out of use; I don’t think modern historians ever use it at all.

It isn’t, so long as you’re buying from a licensed dealer.

It is easier to buy a gun from a private person than it is to vote with the government, but you can “vote” with private pollsters all day long if you like. Voting with the government should be compared to buying a gun through the official system, i.e. from a licensed dealer.

And it should be harder to vote than to buy a gun because you can buy as many guns as you like but you can only legitimately vote once. Also, buying guns is a constitutional right, but voting isn’t. (This surprises people, but search the constitution and you won’t find a right to vote. States can actually restrict the franchise on any grounds except the ones explicitly specified.)

Methinks she doth revel in Shakespeare too muchly…

“What a piece of work is a man! How noble in reason, how infinite in faculty! In form and moving how express and admirable! In action how like an Angel! In apprehension how like a god! The beauty of the world! The paragon of animals! ” Hamlet.

Didn’t realize Hamlet was a progressive.

In the concept of “answering to a higher power”, one understands they are fallible. However, when the person sets the reference as their fellow man, and simultaneously feels superior to most of them, they set up themselves as the final arbiter. In Marxist-Leninist thought… you can make mistakes and learn from them but never be held accountable for the damage done. Example: Whatever Hillary did that was illegal, she lost the election, and is no longer accountable for her “mistakes”….. that would be recrimination. (That only works if you are a Dem/Prog though)

Four intersecting logical domains: science, philosophy, fantasy, and faith. The limit of the scientific logical domain is determined by the observation: accuracy is inversely proportional to the product of time and space offsets from an established frame of reference. What is the Nyquist Rate for sampling time and space signals?

Tax wealth, not work? Something to consider.

One person, one vote. Agree. Although, this is antithetical to Democratic practice.

What you believe engenders but does not determine behavior. So, what do progressive liberals believe?

Religion is the philosophy of morality. For people without faith in an extra-universal entity (“God”), there are two moral articles of faith or axioms: individual dignity and intrinsic value.

Moral, natural, and personal imperatives. Go forth and reconcile.

This is why you should always carry a Sharpie – so you can add to the comment section.

The stickers are like a puzzle. When you fit them all together they create a new message that reads: “I am such a selfish prick in my real life that I must virtue signal publicly to salvage my self-esteem”

(Rag’s Reader Version – even Athiests have spiritual needs, they simply trade one God for another. They worship a Cause (Global Warming), a Cult of Personality (Obama), or themselves (vanity)

For extra credit, review the Christian concept of Indulgences, where performing virtuous acts today was encouraged to offset sins planned for the future.

Both car owners would like to see everyone forced into the world they would choose for them. That means, you work, and we take. Commies are all the same.

That will make sense once we can buy guns at the DMV.