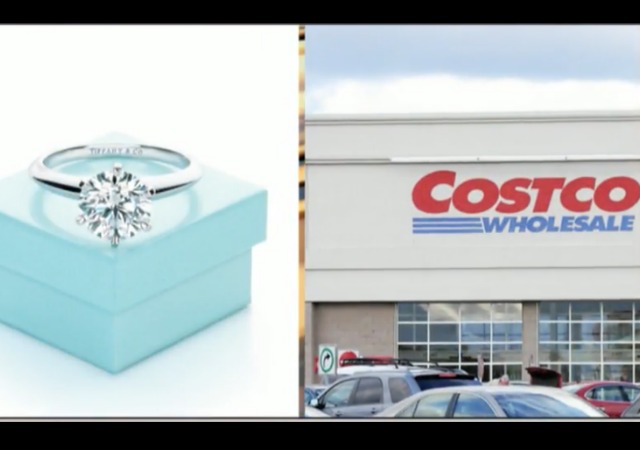 YIKES! A U.S. federal judge has ordered Costco to pay Tiffany & Co $19.4 million since the warehouse club sold fake rings with the Tiffany name on them. From Fox Business:

The Manhattan judge also permanently barred Costco from selling anything that Tiffany did not make as “Tiffany” products, unless it uses modifiers suggesting that the products have, for example, a Tiffany “setting,” “set” or “style.”

Costco said it intends to appeal, calling the decision “a product of multiple errors” by Swain.

“This was not a case about counterfeiting in the common understanding of that word — Costcowas not selling imitation Tiffany & Co rings,” Costco said.

Tiffany had sued Costco on Valentine’s Day in 2013.

While the case concerned only about 2,500 rings, Tiffany sued to protect its brand and cachet as one of the world’s best-known luxury retailers.

Costco had argued that “Tiffany” had become a generic term, excusing its use on a standalone basis.

But the judge found Costco’s defenses “not credible,” given evidence that displays of fine jewelry were a key part of the Issaquah, Washington-based company’s marketing strategy.

Salespeople “described such rings as ‘Tiffany’ rings in response to customer inquiries, and were not perturbed when customers who then realized that the rings were not actually manufactured by Tiffany expressed anger or upset,” Swain wrote.

Yes, why would they not believe that? Who would believe that a large and well-established company such as Costco would brazenly use a famous trademark such as Tiffany without fear of being caught?

These mega companies can get pretty brazen sometimes. Nice to see them get slapped down when they deserve it.

Trademark infringement requires only a likelihood of confusion. Likelihood means ‘probable,’ s higher standard than ‘possible.’ One of the factors to evaluate likelihood of confusion is sophistication of purchasers. Purchasers of wealthy means familiar with the Tiffany name would not likely be confused between genuine Tiffany rings and those rings sold at CostCo.

Other than direct infringement Costco could also be found liable for false advertising (pawning off of a famous name) and trademark dilution for diminishing the value of the famous Tiffany name.

So … what exactly distinguishes this from the eBay case? Tiffany lost that one seven years ago; all claims (trademark infringement, trademark dilution, false advertising) were decided in favor of eBay, and again on appeal.

The two cases have almost nothing in common. Ebay never knowingly allowed the Tiffany name to be used for counterfeit goods. Many, quite possibly most, of the Tiffany items offered for sale on Ebay are genuine, and in every individual instance Ebay has a good faith belief that it is genuine, or it wouldn’t allow it. It has a strict anti-fraud mechanism, and offered Tiffany the opportunity to participate in it, but Tiffany declined.

Instead Tiffany demanded, with no justification whatsoever, that Ebay not allow any user to advertise more than five Tiffany items at a time, without any regard to their genuineness. How could any court uphold a ridiculous demand like that? If I happen to have six or sixty genuine Tiffany items for sale why shouldn’t I put them up on Ebay, and why shouldn’t Ebay let me?

Here Costco deliberately advertised and sold counterfeit items; how can that possibly be justified? Why would any customer even suspect they weren’t genuine? I never bothered to take a close look at the items myself, since I had no interest in them, but I took it for granted that they must be genuine or Costco wouldn’t sell them as such.