Ivy League Profs Urge Students to Think for Themselves in Letter

Ivy League Profs Urge Students to Think for Themselves in Letter

“It always demands self-discipline and these days can require courage.” 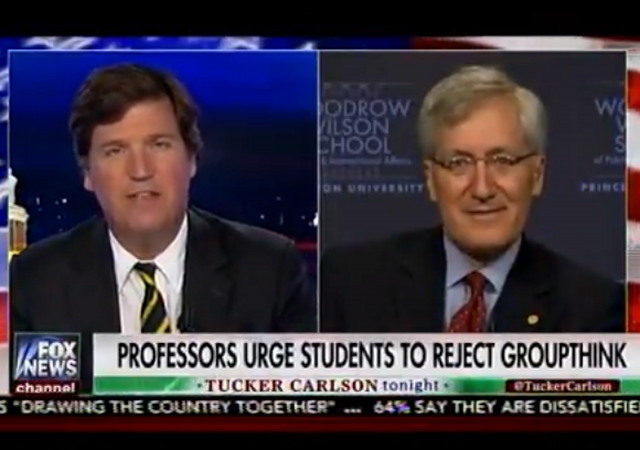 A group of fifteen Ivy League school professors has penned a letter to students, urging them to avoid the dangers of groupthink. In light of recent events in higher education, this couldn’t be more timely.

Ivy League professors to incoming freshmen: ‘Think for yourself’

A group of Ivy League professors is encouraging incoming students to avoid blindly conforming to the dominant political narrative on campus.

In an open letter published Tuesday, the scholars from Princeton, Harvard and Yale said their advice to new students can be summed up in three words: “Think for yourself.”

“Thinking for yourself means questioning dominant ideas even when others insist on their being treated as unquestionable,” the professors wrote. “It means deciding what one believes not by conforming to fashionable opinions, but by taking the trouble to learn and honestly consider the strongest arguments to be advanced on both or all sides of questions — including arguments for positions that others revile and want to stigmatize and against positions others seek to immunize from critical scrutiny.”

The professors said the central mission of the university is the pursuit of truth and inculcating in students the skills and virtues necessary for lifelong truth-seeking.

Here’s more of the letter, from the Princeton University website:

Some Thoughts and Advice for Our Students and All Students

We are scholars and teachers at Princeton, Harvard, and Yale who have some thoughts to share and advice to offer students who are headed off to colleges around the country. Our advice can be distilled to three words:

Now, that might sound easy. But you will find—as you may have discovered already in high school—that thinking for yourself can be a challenge. It always demands self-discipline and these days can require courage.

In today’s climate, it’s all-too-easy to allow your views and outlook to be shaped by dominant opinion on your campus or in the broader academic culture. The danger any student—or faculty member—faces today is falling into the vice of conformism, yielding to groupthink.

At many colleges and universities what John Stuart Mill called “the tyranny of public opinion” does more than merely discourage students from dissenting from prevailing views on moral, political, and other types of questions. It leads them to suppose that dominant views are so obviously correct that only a bigot or a crank could question them.

Since no one wants to be, or be thought of as, a bigot or a crank, the easy, lazy way to proceed is simply by falling into line with campus orthodoxies.

Also, quit judging everything in political terms, and just study. Study your math book in terms of just being a math book, and not a continuation of white culture dominance. Otherwise, you will graduate only capable of being a fast food server or a CNN “journalist”.

It would help if modern math textbooks weren’t rife with examples and story problems about “global warming” and other bugaboos of the Left. The indoctrination is pervasive.

Excellent point! I forgot about that, and boy, that just shows how bad things are. We are at the point where our left wingers resemble the Nazis, who discredited “Jewish physics”. Everything has a political hyperlink embedded in it.

I posted on another thread, where just last night on TV/FOX, some big wig math curriculum woman was saying how important it is to have social justice in math curriculum.
Ridiculous!

And not much of a food server.

I am not a ordained progressive, expert in the orthodoxy (religious allusions intended). But I am pretty sure that letter is rife with microagressions, shows no respect for LGBQT, and ultimately is racist and white-normative.

My sarcasm is really sincere. I think the factions in academia that are fully orthodox progressive will not pay this any attention. Instead, they will attack it like any thought or word that isn’t orthodox.

A group of fifteen soon-to-be-unemployed Ivy League school professors has penned a letter to students, urging them to avoid the dangers of groupthink.

And this is proof that the extremist orthodoxy often chanted here that universities are mere cesspools of Collective indoctrination is…well…false.

..and yet they were only able to get fifteen professors to sign onto the letter, instead of the entirety of the faculty as it should be.

I wrote a work of fiction once where the beleaguered student goes to the teacher and begs him to solve a problem of his own making, to which the professor chuckles and replies: “My boy, that’s not my problem at all. This is a University. What kind of teachers would we be if we provided answers to all of your questions?”

It is good to know that teachers who want their students to strive for answers are not found solely in fictional stories.

That is some great liberal sophistry. Taking an extreme minority and using it to discount the existence of the other 90% or more.

Is college education merely a process of Collectivist indoctrination?

Do you believe that truthful statements are subject to a percentage (you assert without support) for their validity?

Some bubbles have very, very thick walls. And THIS is one of them.

How many prominent conservative bloggers can you name who are in the ranks of the professoriate? Go ahead. Try.

How is this proof against such? Good people do survive in harsh, adverse, and uninviting conditions (such as cesspool and wasteland environments).

I suspect the letter was penned in response to declines in enrollment and admission requests. Few American parents want to pay for (or assist in paying for) education that makes their children hostile to the parents’ core values.

I got the feeling it was more a reaction to the suffocating encroachment some (few) academics see. The groupthink is clearly on steroids over the past few years. And those academics – 16 so far in total from all of 3 or 4 Ivy League Schools? – are making a last ditch action for self-preservation. Just my “gut”, but I suspect they feel the noose tightening. I wouldn’t be surprise if all of the 16 who signed are far outside of the current, dominant, hard-hard left orthodoxy of the majority of their peers. Spencer admits to being “conservative” in his own self-labeling. The others would probably consider themselves “liberal”, but just not as hard core as the majority.

A group of fifteen Ivy League professors are about to spend more time with their families.

The Collective has ways of dealing with professors like this. Those who are unassimilable will be ejected, forcibly if necessary. College administrations will cooperate … as we’ve seen before, and will see again.

There’s another 15 for the academic gulag.

That would be the one where Prof. Jabobson is imprisoned.

He’s not trapped in there with them.

They’re trapped in there with him. 🙂

Perhaps these 15 have courage that many other professors who share their thoughts do not possess. Perhaps these 15 are near retirement which they know will be demanded of them by the leftists.

I commend these 15 professors for taking a step in the right direction. They may only be 15 out of 15,000 but Tiananmen Square and Solidarity faced tyranny and should have failed. Destroying one professor is easier than destroying 15. Let’s see who else steps forward and who attacks and who (i.e., which college President) caves in appeasement. Thank you Professors.

It shouldn’t have had to come to this, but I’m glad that these 15 are taking a stand.

I’m willing to be that most if not all are tenured.

The left is working on getting the other 15 out. It’s a long game: